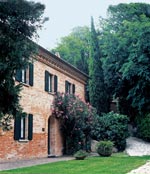 Alberta Ferretti, Christian Lacroix, Azzedine Alaïa, Giorgio Armani…Their names are inscribed in our clothing, eyewear, shoes and jewellery. When it comes to something to put on, theirs are the names we trust. But what about something outside the wearable realm? Something like … a hotel?

All these designers, and many more, have come out of the closet — literally — and branched into the hotel business. Bvlgari, Ferragamo, Anna Molinari and Versace all have posh pads. It’s branding logic-if you like the cut of their trousers, you’ll probably love their rooms. And one thing’s for sure: fashion hoteliers are fanatical about thread count.

What’s great about fashion designer hotels is that there are no unpleasant surprises. After years of seeing Lacroix’s maximalist clothes on the runway, his hotel is hardly going to have poured resin floors and white walls. Irish milliner Philip Treacy is in the middle of designing his first hotel, The G, in his native Galway. As this goes to press, management is giving nothing away, but should the hotel look like a hat (or his next series of hats look like
hotels), it will startle no one. Whether it’s as easy to design a lobby as a cocktail dress is debatable. Here are three A-list fashion hotels to check out (and check into).

Palazzo Viviani
The name “Alberta Ferretti” has become synonymous with the sugarsweet frocks that Scarlett Johannson and Uma Thurman love to wear. What isn’t so well-known is that Ferretti is something of a tycoon in the hotel business. THe Ferretti family hails from Le Marche, a less touristy region of Italy on the Adriatic coast where all the Ferretti hotel properties are concentrated. In the early ’80s, Ferrett and her partners bought a crumbling 14th-century fortified hilltop village and set about restoring it. Now, tiny Catello di Montegridolfo boasts the Palazzo Viviani hotel, several gorgeous guest houses for longer stays, a tobacco shop, gelataria, post office, church and clock tower, and chic boutiques and restaurants. Besides the dazzling school of Giotto fresco hidden away in the Church of San Rocco, the town’s crown jewel is the Palazzo Viviani. It has only eight rooms and is characterized by wonderful old beams, terr-acotta floors and romantic details like linen curtains, wrought-iron canopy beds and handpainted scrollwork on the walls.

The Affreschi room, in particular, with its angel frescoes, Aubusson-style tapestries and plush double French bed, is outstanding. Furnished by Ferretti in elegantly serene style, the Palazzo Viviani and apartments in the Castello di Montegridolfo all have the endearing simplicity of her clothes.
www.montegridolfo.com

Photo courtesy of Castello di MontegridolfoHotel Du Petit Moulin
Christian Lacroix has created a tiny, 17-room universe at the Hotel du Petit Moulin that is as exuberant and colourful as his baroque evening gowns. Housed in a 17th-century converted bakery, the four-storey Petit Moulin is in Paris’ third arrondissement, which is full of art galleries and vintage shops away from the hurly-burly of the more popular Marais. Every room is different, decorated in a mishmash of styles that would give a minimalist a migraine. There’s a Targhetti lamp here, an India Mahdavi settee there, and on the walls you’ll find — depending on the room — a moon and stars, hunting scenes or blow-ups of Lacroix’s sketches, and ’70s Danish design tying it all together. Stripes collide with toile de Jouy, Japanese brocade with polka-dot carpet, and the wallcoverings and drapes in silks and velvets will make you want to whip out your sewing machine and create something frothy — or ask Mr. Lacroix to. www.hoteldupetitmoulin.com

3Rooms
During the ’80s, Azzedine Alaïa was something of a den mother to supermodels, cooking dinners for Naomi and Stephanie and making sure they got to bed on time, or that they got to bed at all. Capitalizing on his legendary reputation for hospitality, Alaïa has opened a tiny hotel in Paris with Carla Sozzani of Milan’s 3Rooms 10 Corso Como. Modelled on Sozzani’s bed and breakfast, Alaïa’s 3Rooms 5 Rue de Moussy consists of three 120-square-metre, self-contained, loft-like suites — each on its own floor — in a building next to Alaïa’s atelier and private residence. Often at night, you can peek out and see the
master at work. There is no lobby or concierge service, but there is
24-hour room service and Patrice, who takes care of everything. Visitors can carry on everyday life — shop for groceries, throw dinner parties, clean house — except they’re doing it in Paris next door to one of fashion’s most revered couturiers. Alaïa designed the apartments himself, furnishing them with pieces from his own furniture collection. You may find yourself settling into a good book in a 1930s Pierre Paulin armchair, having dinner on a Jean Prouvé dining set or watching TV in a Marc Newson Lockheed Lounge chair. With three rooms, reservations are, understandably, hard to get, especially in the run-up to Fashion Week.
011-33-1-4478-9200.