Grab the remote and settle in for an evening of guilty pleasures with ELLE's guide to this fall's top TV picks. 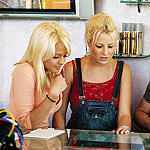 Theme: The fabulous life of…
Dirty Sexy Money (CTV) and Viva Laughlin (E!)
Dirty Sexy MoneyTripp Darling (Donald Sutherland), an eccentric and obscenely wealthy man, propositions idealistic Nick George (Peter Krause) with $10 million to take over his deceased father’s job as the family attorney. But when Nick learns of the Darlings’ excessive pill popping, suicide attempts and extramarital love affairs with she-males, he begins to wonder if money really is the root of all evil.

Theme: Geeks galore!
Big Bang Theory (CTV) and The It Crowd (NBC)
The It Crowd
Based on the British series, this quirky comedy follows the antics of two computer nerds, Roy (Joel McHale) and Moss (Richard Ayoade), who may — with the help of the charming but IT-challenged office manager, Jen (Jessica St. Clair) — actually land a date.

Theme: Vampire delights
Blood Ties (CHUM) and Moonlight (CTV)
Moonlight
Instead of feeding on the living, vampire/private eye Mick St. John (Alex O’Loughlin) uses his powers to help them. It gets a little tricky when Mick falls for a mortal named Beth (Sophia Myles). Should he share his secret with her in the hope that she’ll want to live forever?

Theme: Reality bites
Triple sensation (CBC) and Sunset Tan (E!)
Sunset Tan
Have you ever wondered what a day in the life of a glamorous, pricey tanning salon is like? Neither have we. But this reality show, which follows the ins and outs (both store visits and house calls) of bronzing the rich and fabulous, might be our guiltiest pleasure this season.

What will you be watching this season? Share your faves with other readers in our forums!