From serious to sexy and everywhere in between, here are some hot summer reads. 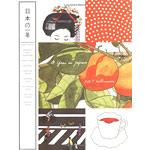 Visit our forums to chat about the hottest trends!

Not making it out of the country this summer? Travel from the comfort of your living room with A Year in Japan by Kate T. Williamson, who spent a year studying in Japan and observing the country’s habits and culture. She focuses on the lesser-known details of life rather than the well-known generalities, and describes what she sees through journal-like text and stunning watercolours. Once you’ve browsed through her selections of Japanese cultural tidbits, from the wide selection of beautiful washcloths to illustrations of plum, apple and cherry blossoms, you’ll come away with a deeper appreciation of Japanese culture — not to mention a gorgeous book to brighten your coffee table.

For a taste of what has been called the Bridget Jones of the Paris suburbs, pick up Kiffe Kiffe Tomorrow by French writer Faïza Guène, a child of Algerian immigrants who, like Doria, the 15-year-old protagonist and narrator, grew up in housing projects on the outskirts of the City of Light. Doria faces racism, crime and poverty daily, not to mention an exhausted mother trying to make ends meet after her husband takes off to marry a new wife, but through it all manages to remain hopeful; after all, kiffe kiffe demain — things will be better tomorrow.

If you’d rather stay closer to home, read How Happy to Be by Canadian Katrina Onstad, a film and culture writer for CBC Arts Online and former columnist for The National Post. Onstad’s debut features Maxime, an entertainment writer at Toronto’s most conservative newspaper (ring any bells?) who is floundering through her celebrity-centred life while memories of a hippie-esque childhood on the B.C. coast filter through her drug- and alcohol-addled consciousness. Set during the Toronto Film Festival, the book captures a modern urban woman’s quest for meaning while providing an entertaining insight into Toronto’s media culture.

Another Canadian writer to keep on your radar is Ami McKay, whose debut novel, The Birth House, has been winning accolades since its release in February. Dora Rare, the only daughter to be born in five generations of Rares, grows up in a remote Nova Scotia village in the early twentieth century. She befriends the local Acadian midwife, Miss Babineau, and becomes her apprentice at a time when science-minded doctors are trying to persuade women to abandon home births in favour of a sterile hospital environment. After Miss Babineau disappears, Dora is left alone to protect the birthing traditions and women’s wisdom that have been passed down to her. This is an enchanting read and a thoughtful chronicle of the struggles women have fought to keep control of their own bodies.

And for a more modern take on pregnancy and childbirth, pick up The Creation Myths by British author Clare Brown. Cressida has a perfect life: great kids, a fulfilling job, enough money, a husband, Harry, who loves her — and an unplanned pregnancy from her affair with Tom, a serial womanizer whose own partner, Nita, is pregnant. Follow the twists and turns as Cressida and Tom make choices that affect everyone in their lives, from their spouses to Harry’s secretary. This humorous look at modern relationships — and the myth of the perfect family — can’t help but entertain.