Comedy, drama, a kill arabesque: Canada's Ksenia Solo can do it all. 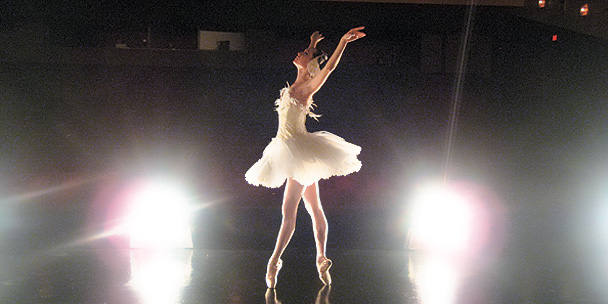 Of all the figures tormenting prima ballerina Nina (Natalie Portman) in Darren Aronofsky’s creepy Black Swan—and it’s a long list, ranging from her skeezy director to her domineering mother—the most striking may be Veronica, an aspiring young dancer played by Ksenia Solo. It’s a small role, but Solo’s dagger- sharp glances and tricky footwork (the Latvian-born actress has been dancing since she was a child) leave a lasting impression.

“It’s fun to play somebody who’s totally confident,” says the 23-year-old Solo, who moved to Canada at age seven and won two Gemini awards for her work on the teen drama renegadepress.com. “Veronica has a very clear goal, and she’s fighting to get to it. She doesn’t let anyone get in her way. I actually wish I was a little more like that, because even though she comes off as cruel, that sort of self-belief is amazing.”

Solo says that she can relate to Black Swan’s milieu of frayed nerves and backstage competitiveness: Her mother was a ballerina, and Solo grew up watching her perfect her craft. “I didn’t experience that world as intensely as it’s portrayed in the film, but I do have a sense of the sort of commitment you have to make,” she says. “I always ask my mom how she did it. It’s unlike any art. I think it’s the most difficult of them all.”

But there’s another demanding, precise art form that interests Solo even more: film direction. “Ever since I saw Requiem for a Dream, I knew I wanted to work with Darren Aronofsky,” she says. “I would come to the set on days where I didn’t have any scenes just to watch him work, because who better to learn from? My dream is to get behind the camera someday.”

For the moment, though, Solo is content to earn her keep in front of it. She is especially proud of her stint on the Canadian series Lost Girl, where she played the supernatural protagonist’s kleptomaniac human pal. “I had never been the comic relief before, but I always wanted to be,” she says, laughing. “Now I’m hooked on comedy. I want to do more.”