ELLE First: The Kendall and Kylie Jenner empire is expanding 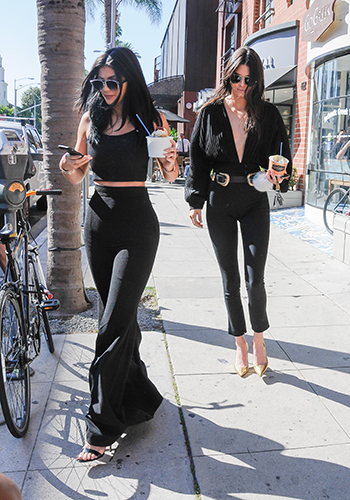 The youngest Jenners are expanding their empire
A line of shoes, clothing and swimwear will launch as part of the Kendall and Kylie collection in early 2016. Reports say the sisters have already placed orders of the apparel for their celeb besties, including Taylor Swift and Gigi Hadid. We are now accepting guesses for how quickly those styles will sell out. (Remember how cute their last line was? We give it 10 minutes.)

More Yeezy Boost 350s could be coming out soon
The release date for the new all-black version of the wildly popular adidas Yeezy Boost 350 running shoe has been leaked. If reports are correct, the kicks could be in stores this August. If you want a pair, start saving your pennies now – the last batch sold for up to 5 figures on eBay. (Alternatively, set your sights on another type of summer shoe.)

Next season, on Girls
Hannah Horvath takes up running on the next season of Girls. Lena Dunham posted a snap of herself mid-jog, explaining that, “as Hannah [Dunham’s character] evolved so would her run…within an hour [of training] I had a different relationship to this formerly torturous activity. I felt strong, swift and proud.” Way to push yourself with your workouts, Hannah/Lena. Note: “I’m not about to take up the triathalon life,” Dunham quipped, “but it’s a true joy to continue getting more connected to my body and its powers.” You go, girl.

Cara Delevingne responds to viral video
Paper Towns actress Cara Delevingne responded to accusations that she was “in a mood” during her now-viral interview with Good Day Sacramento. “Some people just don’t understand sarcasm or the British sense of humour,” she tweeted. Don’t worry, girl – we get your commitment to the craft.

The age of Aquarius
Now’s the time to see how you’ve grown, Aquarius. Are you playing well with others? Taking care of yourself? Check in, because it’s “report card time.” Not an Aquarius? Read more horoscopes here.