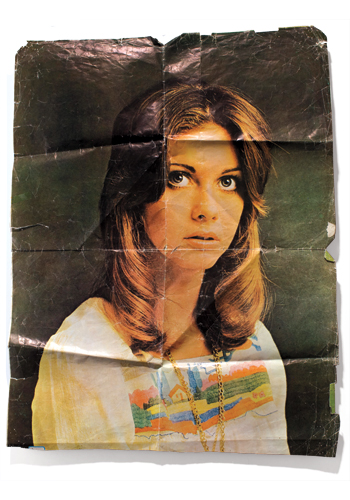 It started as a serendipitous mistake when I was 12. It grew into an obsession by the time I turned 20. And now, at 47, it’s a sentimental bond that I can’t always defend or explain to my more discerning friends. I’m a writer and university professor who once made a living as a theatre critic, so why do I still turn to Olivia Newton-John when I’m in need of a little comfort? Friends, lovers and music idols have come and gone, but her place in my heart remains uncontested.

She first came into my life in 1976 in Cairo, the metropolis of the Arab world where cultures and sounds collided. Earlier in the decade, my father had relocated all but one of his 11 children there to escape the communist regime in what was then South Yemen, our ancestral homeland. My sister Raja’a was a fan of American actresses, including then newcomer Lindsay Wagner, who went on to gain worldwide fame as Jaime Sommers in
The Bionic Woman. I wanted to surprise Raja’a with a poster of Wagner for her 17th birthday, so I went to the Azbakia souk in Cairo, where teens could buy books, magazines and memorabilia of Hollywood and Egyptian stars. I had only seen the
blond-haired actress in passing on TV, so I wasn’t entirely sure what she looked like. “Is this Lindsay Wagner?” I asked the salesman, pointing to a poster on the makeshift cardboard wall. I’d already dug my one Egyptian pound out of my pocket, so he wisely agreed with me. For 75 piastres (a lot of money for a boy whose monthly allowance was five Egyptian pounds—about one Canadian dollar), I thought I had found my sister the perfect gift.

Raja’a was touched, but she quickly pointed out that it wasn’t Wagner. “She looks like that singer, Olivia,” she said, adding that she wasn’t sure about her last name. She had no interest in the poster, so I decided to hang it in the room I shared with my two brothers. “She’s so beautiful,” I remember thinking. Her pure, innocent look stood in stark contrast to the seductive poses of Egyptian pop singers, many of whom still looked like
Hollywood pinups from the ’50s. There was something quintessentially Western, unreachable and alien about her. I wanted to find out if her voice was as good as she looked. I wrote “Oleevia” on a piece of paper, determined that the next time I was in Columbia Hall—a record shop that had become a colonial outpost during Egypt’s years under British rule—I would find one of her records.

Several weeks later, I was asking a snooty salesman if he knew “Oleevia.” He smirked and suggested I start with a 45 of “Have You Never Been Mellow.” This was my first Western pop single. I had only a basic grasp of English so I didn’t know what “mellow” meant, let alone what the song was about. I played the record on our barely functioning turntable as soon as I got home.

I didn’t know a siren song from a police siren back then, but, with hindsight, that’s the only logical explanation for her immediate and disarming appeal. I stopped spending my allowance money on treats for weeks afterwards to save up enough cash to buy a full album. That first purchase was a bootleg of what, years later, I discovered was a Japanese release called
Crystal Lady. It was more or less a compilation of songs from her early studio albums. I played it every day as I got dressed for school and as soon as I got home.

My mother—an illiterate housewife who’d had 11 children by the time she was 33—was amused by this inexplicable crush. Several months into my starry-eyed obsession, she bought me a copy of Newton- John’s
Come on Over album as a present for finishing my year-end exams. Initially she had refused to get it for me when I first saw a copy at a record shop near our family home in Dokki, a middle-class neighbourhood in Cairo. But on the last day of exams, she picked me up from school, took me to a restaurant for lunch and surprised me with it. How did she get it? Did she make a mental note of the album cover? I know for a fact that the words “Olivia,” “Newton” and “John,” let alone “Come,” “on” and “Over,” would have been beyond her ability to even parrot. Her entire English vocabulary consisted of two phrases that my dad had taught her in case one of his foreign businessmen friends called: “Hello” and “Just a moment.”

My father, who had always worried about my effeminate ways, encouraged my Olivia fixation. He himself thought she was a beauty, an English rose. She was much like the many English women he loved to flirt with in colonial Aden (South Yemen) or when he was a student in London in the late 1940s. Her music was inoffensive, innocent and easy listening—before that last label became a byword for bland and old. Neither parent saw anything odd about it: just a boy with a first crush on an unattainable girl. It happens, even in the Middle East.

Newton-John’s place in my affection—and my relationship with my father—was seriously challenged in 1978, when I discovered Barbra Streisand. Until November 1977 (when then president of Egypt Anwar Sadat made a surprise visit to Israel to seek a peaceful solution to the war between the two nations), Streisand’s music and movies had been banned. But after the peace negotiations, distribution companies flooded the market with her movies. My sister Ferial wanted someone to accompany her to a screening of
A Star Is Born in early 1978, so I went along. (The alternative was playing soccer with my brothers.)

Lightning struck again, but this time it came with a sexual charge. Streisand was as sexualized as Newton- John was virginal. She came across as non-conformist and displayed romantic and sexual hunger openly in her acting and singing. The scene where Streisand and Kris Kristofferson take a bath together was the first time I understood that you could use the tub for something other than
cleansing. It was all new and thrilling, and it resonated with a boy who had reached puberty just months earlier. But it was probably a case of misplaced desire because, deep down, I lusted after Kristofferson. I knew I was gay, and I’d had a defining, but until then isolated, sexual experience with a young man four months prior to that screening. Still, I had no words and no emotional outlet for my sexuality in a culture that saw homophobia as a virtue.

I continued to listen to Newton-John, but the soundtrack to
A Star Is Born took my discovery of Western music—and values—to the next logical level. I was ready for rebellion. I didn’t want to wear the same clothes that my mother bought me from the children’s section of department stores. Instead, I wanted platform shoes and striped pants like the ones Kristofferson wore. I let my curly hair grow afro-style and resisted the monthly
haircut ritual at the local barbershop. By the time I was 15, I’d had a number of casual sexual experiences with men my age or older and wanted more.

Keep reading to discover this writer’s growing admiration and lingering love for his pop-culture crush, on the next page…

“It all started to go wrong when you began listening to that Jew,” my father once chided me in 1979, after I’d stayed out late on a school night with a friend he thought was a corrupting influence. He wished I’d stop listening to her and stick to Newton-John. I continued to follow both, but Newton-John still held first place in my affection. I adored her even more in 1981, when
Xanadu opened in Cairo. She didn’t just play a goddess who came down to earth in that movie; she was a goddess to me. I kept collecting magazine articles and pictures of her, an obsession that started in 1978 and continued until 1996, when I moved to Canada after spending nearly eight years as a student in the United Kingdom.

Much of my life since those early days in Cairo has been about finding that balance between being a respectable, loving son and brother and a rebellious, sexually active man. Newton-John—not surprisingly—helped me reconcile these two conflicting sides of my psyche. By the early to mid-’80s, the post-
Grease Newton-John had shed her goody-two-shoes image and was singing about getting physical and posing almost topless, with a riding crop, on the back cover of
Soul Kiss. If she could be naughty, why couldn’t I?

None of her new albums, however, come close to the appeal of those pre-Grease recordings (
Clearly Love,
Don’t Stop Believin’ and, of course,
Come on Over). It’s not the hit singles that still haunt me but the album tracks that only fans know (“And in the Morning,” “Compassionate Man” and “Small Talk and Pride”). Unlike many
’70s icons, Newton-John hasn’t graduated to full camp or kitsch status in pop culture, and most of my friends wouldn’t describe her as cool. Her place as a gay icon is minor next to Streisand, but that only endeared her to me more.

More than 35 years later, I still listen to her albums in times of emotional or physical crisis. “Have You Never Been Mellow” remains a barometer of my inner state. If it’s on more than a few times a week, it means I’m overstressed. Earlier this year, as I was recovering from a debilitating attack of kidney stones that led to a five-day hospital stay, I played her 1989 album of lullabies,
Warm and Tender, on my first night home. I needed a mother figure to sing me to sleep. (I remind you: I’m 47.) As I endured subsequent attacks, I delved further into my Newton-John catalogue. Out came
Making a Good Thing Better and
If You Love Me, Let Me Know.

But perhaps what I’m clinging to is not the music but the memories it evokes. The mother who bought me
Come on Over died a painful and undignified death from Alzheimer’s. The father who once encouraged me to explore Newton-John’s music as a form of aversion therapy passed away a broken man who never had that second career he dreamed of after our expulsion from Aden in 1967. The sister for whom I bought the poster now wears a niqab and refuses to hang any figurative art on the walls in observance of strict Islamic rules (which equate pictures with idolatry.

I may have lost my own innocence, but over the years I’ve also lost my family, literally and emotionally. What’s so “easy listening” about Newton-John’s music when that voice and that face stir up difficult and bewildering memories?

Kamal Al-Solaylee, a frequent ELLE Canada contributor, is the author of the just-published memoir Intolerable: A Memoir of Extremes (HarperCollins Canada Ltd.)