Happy Thursday! Here’s everything you need to know before 8am. 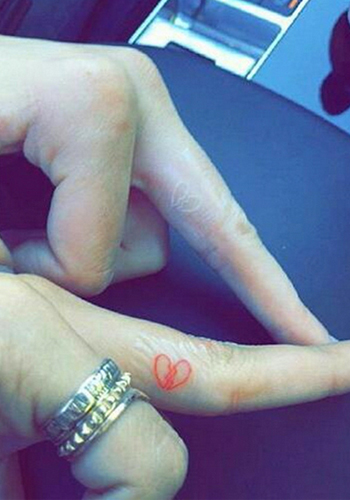 Heartbreakers
Kendall Jenner and BFF Hailey Baldwin got matching tattoos this week: a broken heart on the inside of their middle fingers. Kendall opted to get inked in white, while Hailey had her tattoo done in red. Hailey Snapchatted the tattoos with the caption “Hails n Kenny,” but later deleted the snap—although not before fans took a screenshot!

Out in the open
Since her very public breakup with Robert Pattinson in 2012, rumours have been circulating around who Kristen Stewart is actually dating. For the past 8 months it has allegedly been Stewart’s former personal assistant (and visual effects producer) Alicia Cargile. While the two are continually photographed together, the 25-year-old American Ultra actress has neither confirmed or denied the pair are dating…until now. In a just released interview with Nylon Stewart said: “Google me, I’m not hiding. I think in three or four years, there are going to be a whole lot more people who don’t think it’s necessary to figure out if you’re gay or straight. It’s like, just do your thing.”

#Doritogate
Supermodel Chrissy Teigen had to address eating disorder rumours yesterday after coming under fire for recently saying in an interview to Delish.com: “I lick off the nacho cheese seasoning and put the chips back in the bag. You still get all the flavor, not all the carbs!” Teigen took to Twitter to clear everything up, saying: “I can’t believe I have to address this but my quote about licking Doritos isn’t ‘promoting eating disorders’ it’s a hobby.” Aside from her well-known curves, Teigen is best known for her foodie Insta photos, so it’s surprising anyone would accuse her of not eating. When she’s not sharing snaps of her cooking, she’s usually documenting herself chowing down on everything from fried chicken to ice cream and even has a cookbook coming out in early 2016.

Not FDA approved
Kim Kardashian has never shied away from over sharing on her Insta account—especially during her pregnancies—but it looks like the social media star has finally been asked to remove a photo. And no, it’s not her recent nude selfie. Instead, Kim posted a selfie where she was holding up a bottle of the drug Diclegis. Claiming that it had helped her morning sickness she wrote to her 42.7 million followers: “I felt a lot better and most importantly, it’s been studied and there was no increased risk to the baby.” The FDA wasted no time asking the 34-year-old to remove the photo, which was a paid endorsement, as there is actually no sufficient evidence to prove that this drug is safe. So let’s just agree we’ll all get our medical advice from an actual doctor, OK?

Squad Goals
While Taylor Swift may have a pretty amazing inner circle of girlfriends, we’d like to nominate another squad that is equally inspiring: the women of Orange is the New Black. Taylor Schilling was recently asked about their newest addition, 29-year-old Aussie Ruby Rose and said: “She’s interesting, people like her so much because she’s so lovable and adorable and sweet. Plus, she has a cool accent!” Co-star Laura Prepon added: “Everyone’s personality is so awesome and everyone is so easy to work with that she just fits right in!” Aww.

AHH-mazing
Dear Libra: Someone you may or may not know will impress and amaze you today—once they do, you’ll know exactly what to do with this new information. Not a Libra? Read your Horoscope now!

READ MORE:
Everyone is sexting
23 times Cara Delevingne had better brows than us
20 pieces with cheeky slogans we love