Welcome back from the long weekend! Here's everything you need to know to get your week started. 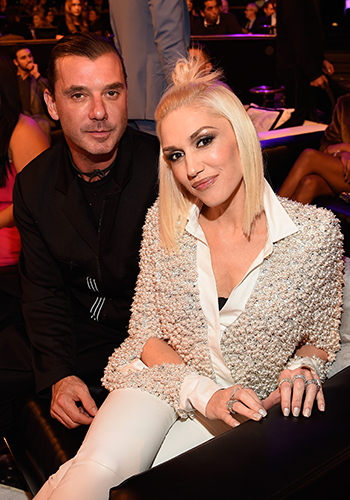 Gwen Stefani and Gavin Rossdale call it quits
After 13 years of marriage (and, mercifully, zero musical collabs), No Doubt frontwoman and fashion designer Gwen Stefani and her husband, Bush lead singer Gavin Rossdale, filed for divorce. The couple, who have three sons, cited irreconcilable differences in a joint statement yesterday, but we can’t help but wonder if the curse of The Voice had anything to do with it – Stefani’s fellow judge on the show Blake Shelton split from his wife Miranda Lambert last month.
The Queen like you’ve never seen her
New portraits of the Royal Family – including Queen Elizabeth, Prince William and the Duchess of Cornwall – have been released ahead of an exhibit called The Queen’s People opening in London this month. The strikingly modern pictures used mirrors to simultaneously capture the Royals in four angles against a black backdrop. To inspire the Queen to flash her pearly whites, photographer Hugo Rittson-Thomas apparently asked her to imagine how she would feel if her horse won the Epsom Derby. So, now you know what to talk about if you’re ever invited for tea (#youarewelcome). See more of the Queen here.
Candy on the big screen
The movie you never knew you wanted to see is FINALLY being made, friends! That’s right, yesterday Pez and Envision Media announced they’re collaborating on an animated film featuring those whimsical candy dispensers that inspired one of the greatest Seinfeld jokes of all time. We can’t wait to see the heartwarming friendship between Mickey Mouse Pez dispenser and Hello Kitty Pez dispenser unfold… awwww.

A major win for women

A controversial Republican-backed bill to defund Planned Parenthood in the United States was defeated yesterday, meaning millions of women can continue to rely on safe access to health care and family planning services across the country. Many celebrities, including Lena Dunham, Sarah Silverman and Kerry Washington, showed their support over the last several days by tweeting the hashtag #StandWithPP. Read up on what else Lena Dunham has been up to here.
Baby news for Zooey Deschanel
Congrats to New Girl actress Zooey Deschanel and producer hubby Jacob Pechenik, who welcomed a baby girl late last month and who (surprise!) were secretly married in June in Texas. No word yet on a name, but we’re sure it’ll be something appropriately “adorkable” – any guesses? Read more about Deschanel’s pregnancy here.
Make friends today, Aquarius girls!
This is prime time to boost all your partnerships, so get out there. Not an Aquarius? Read more horoscopes here.
READ MORE
How to wear denim anywhere this summer
5 ways to get away with sneakers at the office