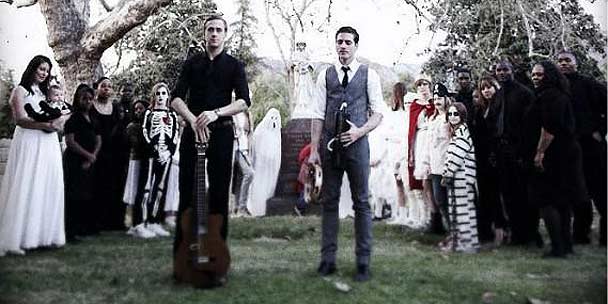 Ryan Gosling gives actor-musicians a good name — or is that a ghoul name? Halloween came early for those that crammed Toronto’s Opera House Oct. 23 to see
The Notebook star and musical collaborator Zach Shields in their strange and charming ghost-themed art-soul band Dead Man’s Bones.

It was fun, it was eclectic and it was awesome, like a well-orchestrated school production featuring the top of the class. You almost expected the person next to you to say, “That’s my Ryan up there.” And, in fact, as Shields pointed out during Dead Man’s Bones set, both their moms were there, but there was also a kids choir from the Etobicoke School of the Arts. They were dressed in ghostly white hooded sheets (with cute little black hearts on their chests), their faces all done up with white make up and black hollow eyes. Their voices were just prepubescent enough to make the songs, such as “My Body’s A Zombie For You,” “Buried In Water” and “Lose Your Soul” have an oooh-we’re-about-to-get-you feel (think of the creepy-sounding kids in Pink Floyd’s “Another Brick In The Wall” without the British accents).

Gosling and Shields, both in white dress shirts and black vests, each took turns singing; Gosling alternated mostly between keyboards, piano and guitar, and Shields mainly handled an assortment of percussion, while a rhythm section and female soul singer rounded out the band. They both happily gave the starring role to the choir, which made the whole evening so endearing with their claps and shouts and sways and dancing — even mock-sobbing and playing dead.

Read more about the show on the next page …

One girl, we later find out is named Zooey, was pulled front and centre and falls to the stage with a bang. “She just got shot,” Gosling tells us with a smile. A sheet is then held up while a brief black and white film is projected onto it to the soundtrack of a howling wind. The little girl then sings Cher/Nancy Sinatra’s “Bang Bang (My Baby Shot Me Down),” first behind the sheet and then in full view, in a quavering, undead voice. She got the biggest applause of the night.

On more than one occasion, Gosling laughed at the silliness. The whole performance — and it really was a performance — ended simply and appropriately with a tear of a sheet of paper and a ring of a tiny bell. “I don’t think you really heard that,” said Gosling, ripping another piece. He should’ve ended it by suddenly yelling “Boo.” While the sold-out crowd didn’t leave with any Halloween candy, Dead Man’s Bones was indeed a treat.

Find out why Chris Rock is obsessed with hair