China: Your next shopping destination! 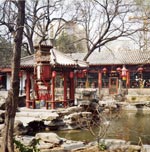 Where Home to 1.3 billion people, the People’s Republic of China is the world’s most populous country.
Your guide Crystal Kwok, 38, Hong Kong-based writer, TV talk show host and director, producer and writer of the award-winning film The Mistress. Kwok’s work-in-progress is a documentary that highlights the similarities between Jewish and Chinese cultures.

Girl talk “Hong Kong men know how to open doors and pay for meals, but they don’t know how to nurture a relationship,” reveals Kwok. “Beijing intellectuals may lack grooming and style, but they can be very charming and good at conversation.”

What to wear “A bra! Personal parts shouldn’t be suggestively displayed,” says Kwok. Last year, Chinese officials requested that Britney Spears not show too much skin for her tour stop in Beijing. Kwok says people in Hong Kong also have a problem with overt sexuality. “My talk show was controversial because we discussed taboo subjects like sex. Chinese people don’t usually talk about these things in public.”

Local lore If you have space between your fingers when they’re closed (palms up), that means money slips easily through them. You must adorn them with jewels to close the gaps–preferably with gold. The irony is not lost on the Chinese that by splurging on gold rings, money has actually slipped faster through your fingers than if you hadn’t had to buy the rings in the first place.

Style “Hong Kong is a great place to shop,” says Kwok, “especially for well-known fashion brands.”Fashionistas show off their designer threads as a sign of prosperity, and international designers like Giorgio Armani, Chanel, Hermès and Gucci recently opened boutiques in the area. “I really like Miu Miu,” says Kwok, “but my favourite local designer is William Tang, who designed my wedding dress.” Hong Kong designers Johanna Ho, Ruby Li and Henry Lau also like to mix European minimalism with Asian pageantry.

Photography courtesy of Line AbrahamianCRYSTAL’S BEST LIST…
Hangout Hong Kong’s hippest bars, clubs and restaurants are on Hong Kong Island. Current hot spots are Jewel, Isola, Red, Drop and Yumla, although the people-watching is always fun in Stauntons. In Kowloon, The Peninsula Hotel’s Felix Bar–designed by Philippe Starck–has a dazzling view of Hong Kong’s harbour at night (especially from the men’s room). And the dance floor — a Perspex box — is supremely groovy.

Pillow talk Spend the night at Hong Kong’s plush Kowloon Shangri-La hotel and you just might bump into action star Jackie Chan. A regular at the hotel’s French restaurant, Margaux, he even keeps two pricey bottles of wine in its cellar. The newly remodelled guest rooms feature marbled entrance foyers, home theatre DVD systems and sumptuous beds complete with pillow menus. In the morning, enrol in a Tai Chi class or escape to the health club for a reflexology session. Then head to Café Kool for chocolate nirvana– a one-of-a-kind chocolate fountain with marshmallow, strawberry or pineapple dipping sticks.

Bay watch Touted as Hong Kong’s Waikiki for its emerald waters and white sands, crescent-shaped Repulse Bay attracts thousands of beach goers during summer weekends. Shorts and bikinis are acceptable, but nude and topless bathing are a definite no-no. “If you’re on the south coast, you should visit Stanley,” advises Kwok. “It’s fun shopping for clothes, bags and jewellery in the market.”

Photography courtesy of Line AbrahamianBejing
Where Mandarin-speaking Beijing is China’s capital and host of the 2008 summer Olympics. More sedate than Hong Kong, this northern city is the cradle of Chinese politics, history and culture.

Style “People aren’t as brand-conscious in Beijing as they are in Shanghai or Hong Kong,” says Kwok. “But Beijing women are proud of their individuality.” Just as well, because high-end luxuries are beyond the average person’s means. International labels are available, but foreign-owned design houses rely on domestic partnerships to open boutiques– Giorgio Armani and Louis Vuitton both have stores in Beijing’s Peninsula Palace hotel. Counterfeit branded goods are sold from market stalls (three dollars for a “Rolex,”five dollars for “Prada”shoes), but the government is cracking down on knock-offs, most recently closing the infamous Silk Alley market. It’s still wishful thinking that the sale of endangered species’ body parts — like ground rhino horn for cooling blood — will disappear from China’s more nefarious animal markets.

CRYSTAL’S BEST LIST …
Hangout In Beijing, local fat cats and celebrities dine like kings at Dazhaimen Restaurant of Family Bai, which serves Chinese emperors’ favourite delicacies such as hou tou gu mushrooms and shark’s fin soup. Situated inside a serene garden with ponds and colourful pavilions, the restaurant recreates the Qing dynasty era by dressing up its waiters as eunuchs with long, braided tresses. The waitresses wear traditional Chinese concubine dress with platform heels and flowered headdresses (concubines were named after — and wore — different flowers so they were easily identified).

Pillow talk Hotel lounges and bars are ultra-hip in Beijing, and Shangri-La’s luxe Kerry Centre Hotel is home to the popular Centro bar. It’s a great place to people-watch, and local celebrities like actor Russell Wong, rock star Zheng Jun and model Mao Mao have been spotted there. Choose one of the spacious sofas overlooking the Japanese-inspired garden and enjoy a few of their famous cassis jelly shots, served on silver toothpicks.

Culture club “Nothing in Beijing compares to the Great Wall of China and the Forbidden City,” says Kwok. Touted as the eighth wonder of the world, the part of the wall nearest to Beijing is always packed, leading to bottlenecks mid-climb. Wander round the maze of 800 buildings in the Forbidden City — the setting for Bernardo Bertolucci’s The Last Emperor. Twenty-four Ming and Qing emperors reigned from here for more than 400 years-and the last living relative sells his own paintings from a shop in the Forbidden City.