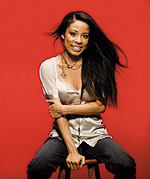 For the past few years, Keshia Chanté has led a double life: high school student by day; R&B diva/hard-nosed businesswoman by night. "It has been a bit crazy," says the 18-year-old Ottawa-born singer. "I wanted to go to a normal school, but it didn’t work that well because I had fans in my math class giving me notes to sign and stuff. So I got a tutor and worked hard. I’d get home at three in the morning and still have homework — I’d do it on the road, in the car. In October, I graduated with my class, which was a big accomplishment for me. And now I can tell my fans that no matter what you do, education is important and you can get it done. If there’s a will, there’s a way."

With five top-10 singles, an armful of awards and a gold debut album on her resumé, Chanté has the confidence to dream big. Currently, she is putting that formidable ambition and drive to work spreading the word about her brand-new second album,
2U (Sony BMG Music Canada), which features a more mature, sophisticated sound and collaborations with producers who worked on albums by artists such as Puffy, Usher and Kelly Rowland. "The first album wasn’t as personal," she says. "This one is more personal — a lot more vulnerable, a lot more emotional, a lot more 18."

2U is also her first worldwide release, starting this month with the United States. "It’s so exciting — I’ve been wanting to share my music with the world since I was a kid," says Chanté, who made her live debut at six and started writing poetry at eight. "I’m a businesswoman now. I’m there in the meetings, discussing my marketing, my vision, my artwork — everything. I’m passionate about what I do; I take it seriously."

Ever ready for the camera
A natural in front of the lens, Chanté jumped at the chance to have an MTV camera crew follow her as she prepared for the release of 2U — from a video shoot in Miami to appearances in L.A. to attending her high school grad. (MTV Diary airs December 5 or can be viewed on demand on MTV Overdrive at www.mtv.ca.)

Reflecting on this experience as well as that of making the album, Chanté says she can’t believe how many things she has learned. "With the album, I worked on mixing, writing and arranging vocals. I used to be a non-dancer; now I’m choreographing my own shows and videos. I used to be just this girl who loved music; all I wanted to do was sing. But now I have this crazy artistic instinct. I’ve developed so much, and I’m finally coming into my own."

Keisha Chanté’s second album, 2u (Sony BMG Music Canada), reveals a new musicdal maturity emerging from the Toronto-based R&B singer. Just check out the Vivaldi sample on the easy-going"Been Gone," the sweetly swoony "Kiss," the sassy put-downs of "Cool on You" or the celewbratory Earth, Wind & Fire vibe of "Can’t Believe." Chanté’s strong, confident voice lifts the material beyond conventional R&B and gives her a sound that’s all grown-up.

Read the latest on the lovely singer/songwriter/poet Jewel.