What the soon-to-be newlyweds' big day will look like. 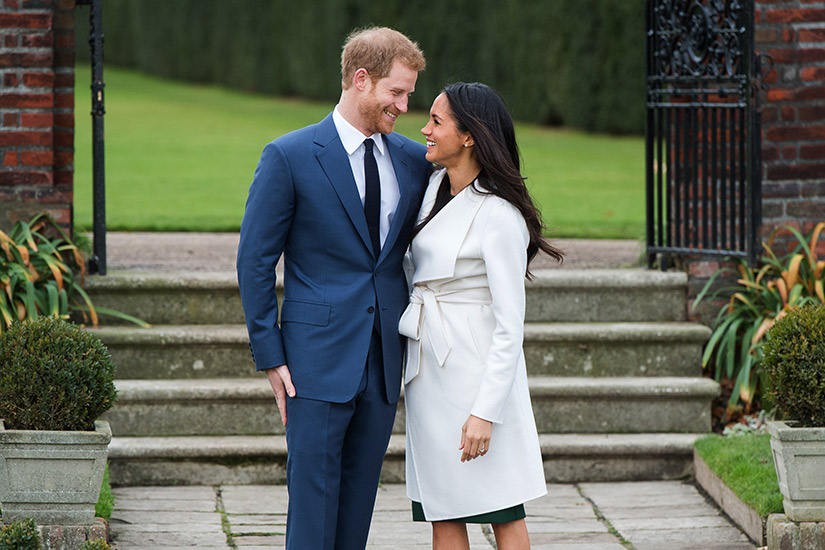 The royal wedding 2.0 is almost here! We can’t push back the time of the wedding (sorry), but we can break down the proceedings down for you so you know when to set your alarm. Here’s what we can expect on Saturday.

9 a.m. London time (4 a.m. EST): The 2,460 members of the public who have been invited to stand outside on the grounds of Windsor Castle will be the first to arrive for the ceremony on Saturday morning. For those who need a refresher: among those lucky enough to score an invite were members of the royal household, students from local schools and people from “every corner of the United Kingdom” who are involved in their communities.

9:30 a.m. London time (4:30 a.m. ET): The celeb watching begins. For the next hour and a half, the approximately 600 wedding guests are expected to arrive by coach to Windsor Castle’s Round Tower. Those who have already secured their spot out front can catch a glimpse of everyone on the guest list—like Meghan’s Suits co-stars and BFFs Priyanka Chopra and Jessica Mulroney—entering the south doors of St. George’s Chapel.

Girls day out.. #whoruletheworld @meghanmarkle @mubinarattonsey thank u for the kinda day I needed

11:20 a.m. London time (6:20 a.m. ET): It’s VIP time, as the royal family is scheduled to arrive. Some will be on foot, others will arrive by car, but one thing is certain: the fascinators will be eye-catching. Harry and Wills will also head over to St. George’s Chapel around this time, giving the groom and his best man a chance to greet some of those on the castle’s grounds—including 200 guests from Harry’s charities gathered at the bottom of the West Steps.

A bit further away from the chapel, Meghan and her mom, Doria Ragland, will depart their overnight location for the chapel. Their drive will take them through the town, so that those waiting outside can catch a peek of the bride. Meghan’s mom will head into St. George’s first as Meghan is joined by her bridesmaids and page boys before climbing up the steps.

Noon London time (7 a.m. ET): Ensure that you’re properly caffeinated by now: it’s time for the ceremony. Meghan’s dad, Thomas Markle, will walk the bride down the aisle. The dean of Windsor, Reverend David Connor will lead the service, while Justin Welby, the archbishop of Canterbury, will perform the actual marriage. There will also be music throughout the one-hour service, including from young cellist Sheku Kanneh-Mason, who Meghan personally called to ask to perform.

Royal watchers will be paying particularly close attention to Meghan’s vows. The traditional vows recited during British royal weddings ask the woman to obey her husband. Princess Diana, however, became the first to not make that specific promise in her vows to her wedding in 1981 to Prince Charles. Kate also followed suit at her own wedding in 2011, so everyone will be watching to see if Meghan does the same.

1 p.m. London time (8 a.m. ET): Officially husband and wife (yay!), Harry and Meghan will embark on their 25-minute carriage procession through Windsor. The couple have chosen the royal Ascot Landau carriage, pulled by adorable father-and-son Windsor Grey Horse duo, Storm and Tyrone, to take them on their route.

The newlyweds will end their tour back at Windsor Castle, where they will bid farewell to the public spectators before heading into St. Michaels Hall to the lunchtime reception Queen Elizabeth is hosting for their 600 guests. It’s been reported that Meghan is even planning to break royal tradition by giving a speech at the gathering.

We dropped in on the Kitchens at Windsor Castle, who will shortly begin final preparations for the #RoyalWedding. Follow the link in our bio to take a look behind the scenes with Royal Chef Mark Flanagan and his team.

After the reception: Timing is still TBD, but we do know that the father of the groom, Prince Charles, is holding an evening reception for the happy couple at Frogmore House, a 17th-century manor that’s less than a mile away from Windsor Castle. It’s also a more exclusive, intimate event: only 200 guests have made the cut.

We will, thankfully, be able to follow all the day’s events right at home—or wherever your royal wedding viewing party is being held. CBC, CTV, Global and CityTV will all be covering the event, streaming online about three hours before Meghan and Harry walk down the aisle. The event can also be viewed on streaming service BritBox, which specializes in streaming British TV, with plenty of pre-wedding coverage also available on the site. You will have to sign up for the service, which costs $8.99 a month (pro-tip: it’s the perfect time to take advantage of their seven-day free trial).