Can a girl really have it all? How Katy Perry managed to get the career, the guy and the fanfare. 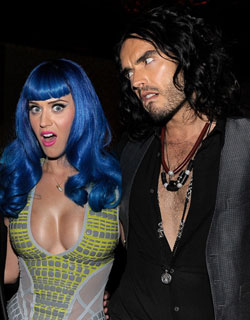 Katy Perry owned the summer of 2010. She made international headlines whether she was Tweeting about her Minx manicure or a certain zombie-eyed pop singer’s ‘blasphemous’ video. Promoting her sophomore album,
Teenage Dream, (released August 24), Perry hop-scotched continents and performed everywhere – the Grammys, Germany’s Next Top Model, the MuchMusic Video Awards. Her chart-topping single "California Gurls", was the catchiest tune since, well, "I Kissed a Girl".

The star from Santa Barbara wants it all, a hot career, a husband and family. (See “Sugar & Spice” in the September issue of ELLE Canada.) Here Perry talks about celebrity, songs, and “sexting”.

Did you really text Russell [Brand, her fiancé] a photo of your breasts after meeting him for the first time last year at Radio City Music Hall?

Something went down, but, of course, I would never give away that much!

What exactly did you show him?

Well… I send him pictures of my boobs now, but we’re getting married, so that’s all right. I think all girls do that.

How many kids do you want?

Russell has been shooting a documentary, Happiness, interviewing ordinary folk and celebrities. Does fame equal happiness?

I don’t think fame is necessarily a word I use in my vocabulary very much because it’s a doubled-edged sword. Look what happens with paparazzi…. they’re good and bad for you. If they’re not there, then obviously it’s [fame] not working in your favour. If they’re there, you want them gone. It’s a catch-22. Russell is in the same headspace, we know that fame is very fleeting, and that’s why we get on so well.

How much of Perry’s personal life is reflected in her new album? Find out on the next page…

How much of your personal life is reflected in Teenage Dream?
It’s a snapshot of where I am now. "Not Like the Movies" was the first song I wrote. It’s about love and heartbreak. As women, I feel like we get into a relationship but we have this scratch inside that we don’t pay attention to. You can tell this person isn’t the one but feel “this is the best I can get. This is what I deserve”. My anthem on that song is to say I do believe there is a match out there for people.

You’ve found yours.
Yes! I started writing this song before I met Russell and I finished it afterwards. It’s bittersweet in the beginning and it comes full circle.

Your song lyrics can be provocative. What was the first song you memorized? Was it sassy?
“Adelweiss” from The Sound of Music! I was in first grade and got it as a solo at the Christmas play. I just remember my voice quivering.