Leona Lewis is ready to hit the road for her first world tour. 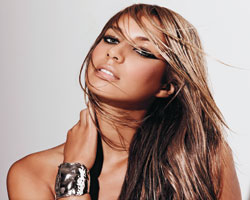 Singer Leona Lewis has a lioness presence about her. Beyond her flawless golden skin and mane of honey-coloured waves, there’s this powerful voice. Her first album, Spirit—and its mega-single “Bleeding Love”— earned her multiple Grammy nominations and huge sales. Now she’s taking a second album, Echo, out on her first world tour.

“With this new album, I’m definitely stepping outside of the ballad zone,” says Lewis. Highlights include the electro-groove tune “Outta My Head” as well as the Indian-inspired “Brave.” For lovelorn fans, there’s the heartbreaking “You Don’t Care” and the empowering anthem “Happy.”

Thankfully, Lewis’ songs aren’t based on personal love troubles, she says, adding that she’s still happily dating childhood friend Lou Al-Chamaa. “When I write, I embellish things and use made-up situations,” she explains. “I’m very into daydreaming and then creating from there.”

Lewis has always been a dreamer. She did her time in service jobs— including a stint as a Pizza Hut waitress—but was determined to make it. The casually clad girl with the head of unruly curls slipped unassumingly in 2006 into the audition room of British talent competition The X Factor. She launched into “Over the Rainbow” almost before judge Sharon Osbourne could finish her sentence. Lewis’ powerful presence even prompted a startled smile and applause from the normally crusty Simon Cowell. No wonder the clip has been viewed almost eight million times on YouTube.

Then came Spirit’s number-one debut, seven million copies and three Grammy nominations. Dealing with such a heady ascent took its toll on Lewis. “It took a lot of time to collect myself,” she says. Lewis had never even lived away from home before, so she left London for Los Angeles. She got a house with her manager in Santa Monica and spent her time riding horses and writing.

But whether she’s working on “Don’t Let Me Down” with Justin Timberlake or co-writing a dance track like “Fly Here Now,” Lewis says that her voice is the focus. “I’m a singer—a lot of people aren’t singing real songs,” she says. “I’m kind of a traditionalist. I like a good message that doesn’t talk about just crap. It isn’t a common thing anymore—actually singing—so there’s a lot of opportunity to rise above.”

What does Lewis refuse to wear during photo shoots? Find out on the next page…

• Animal instinct Lewis has made headlines by getting foie gras off the Brit Awards menu and refusing to wear leather during photo shoots.

• Sweet deal Lewis developed her eponymous scent with German company LR because they don’t test on animals: “It has vanilla in it, so it’s something I actually wear!”

• Accessories line She would love to design a vegan line. (Rumour has it that she’s working with noted animal-friendly designer Stella McCartney.) “It would be ethical, and influenced by what I like: feminine and sophisticated but with a funky quirkiness.”

• Horsing around Lewis says that she would love to open a sanctuary for horses, but, for now, the in-demand artist is sifting through her endorsement offers. (She has already turned down a gig at Harrods because the store sells fur.)