Why you need to know Nat Wolff

This summer’s hit The Fault in Our Stars is just the beginning for this double-threat. 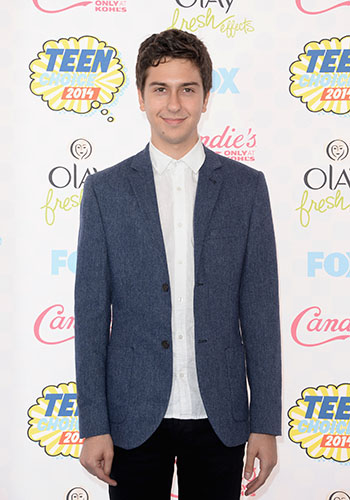 Chances are, of the 99 times you full-on-wept while watching The Fault in Our Stars at the theatre this summer, at least 5 of those were because of Isaac, a supporting character in the book-turned-film who loses his eyesight (and his girlfriend). We chatted with Nat Wolff, the 19 year-old who played the teen, about working with Shailene Woodley, life after a hit movie, and why he kinda hates acting.

Not a morning person?
Oh no. I’m the opposite– I get all my creative energy at night. I like writing songs at night, and I like night shoots on set. The morning is just not my thing.

But it’s nice being awake when no one else is…
Well, then you should stay up until 4am.

In doing all the press for TFIOS, what’s the question that you wished people would ask you?
Why is Isaac so handsome? Maybe if they asked me about my music, and how that plays into the movie.

PLAYLIST: The Ultimate Songs of Summer

Well, tell me then! How does your music play into The Fault In Our Stars?
I actually have a song, “Rules”, from my band with my brother, in the movie. It’s playing in the headphones in the scene where I’m smashing the trophies. Our band also had two songs come out timed with the movie.

Do you find it hard juggling music and acting?
I actually got to talk to Jared Leto about a year ago, and I was asking him about music and acting, and he was so nice. I finally got up the nerve to ask him “how do you schedule it?”, and he was about to answer me, and then this beautiful blonde model walked by, and he was like “Hold on one second”, and he started talking to her. And then I never talked to him again.

You’ll never know the secret! But if you had to choose one, which would you pick?
I actually don’t find acting that fun, and I don’t find song writing or performing that fun. I actually find them difficult and they make me really anxious, and they can be upsetting. But they’re both the most fulfilling thing I can do.

Is your life different after The Fault In Our Stars?
Only in great ways. People come up to me, and tell me they’ve really been affected by the movie. You get used to hustling for jobs when you’re starting out, and now suddenly people want me in the movies and I have to rethink my attitude about the business. I really did get super lucky.

What was it like being part of such a successful movie?
Shailene Woodley and Ansel Elgort are really great actors, and I knew we were making something special. But people really do care about my character Isaac. Somebody came up to me in the airport before the movie came out, and they were like “You’re playing Isaac? He’s my favourite character. Don’t fuck it up.” So aggressive! We all tried to those characters that were so perfect in the book justice.

Tell me a little about your next project! It’s the film adaptation of John Waters’ Paper Towns, right?
It’s happening in November, and it’s the same screenwriters as Fault in Our Stars, and obviously the same novelist. It’s going to be amazing, because it’s a really beautiful story. I think it has the potential to be a really great romance and mystery.

The Fault In Our Stars is now out on DVD.

READ MORE:
Shailene Woodley’s all time best looks
Why Shailene Woodley doesn’t want to be the next Jennifer Lawrence
Jared Leto: In praise of the man bun