Why Shailene Woodley doesn't want to be the next Jennifer Lawrence 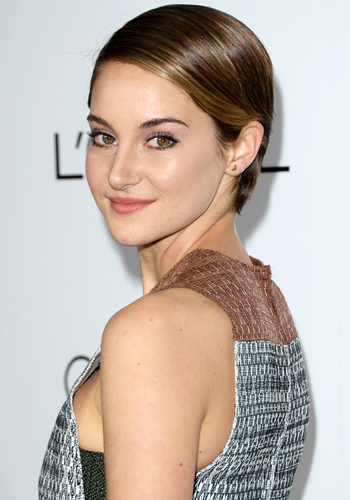 When you interview Shailene Woodley, you will get hugged – as you first meet her, when you leave and possibly even while you take a selfie together. The Divergent star may even compliment your outfit, offer you tea, and repeatedly check that you’re not too cold.

I met Shai, as she introduces herself, during her whirlwind press-tour for Divergent, the dystopian thriller based on the series of wildly popular YA books by Veronica Roth, in which Woodley plays the film’s heroine Tris.

Despite a hectic schedule, the friendly 22 year-old was ready to sound off on what makes her crazy: namely, media generated rivalries between female actresses.

“Putting another woman down and raising another woman up is disgusting on every level and it makes me want to puke,” she said, referring to a specific example that she said was “so fucked up.”

A recent Hollywood Reporter profile questioned whether she would turn out to be the next Jennifer Lawrence with a wildly successful franchise like the Hunger Games, or the next Lily Collins, whose turn as the heroine of a dystopian novel-turned-film didn’t have the same success.

This comparison offended Woodley. “How can we as females and citizens of this earth expect men to start respecting us,” said Woodley, “when we can’t find sisterhood and support from one another?” (The author of the Hollywood Reporter piece was a woman, by the way).

Find out what makes Shailene Woodley crazy on the next page…

It’s not that she’s not flattered by a comparison to Jennifer Lawrence, who actually urged her to take on the Divergent franchise.

“It’s a compliment because she’s done really well, but the second you start comparing, and putting another person down for that reason, that’s when it starts crossing the major line for me,” she says, adding disdainfully: “It’s like – ‘Dude, come on, middle-school drama’.”

In the same vein, she doesn’t have much time for grumbling, bored actors on sets. “I’m like, you chose to do this! You live a really fucking glamorous life so shut the fuck up, and if you don’t want to do this, go do something else.”

She points to Kate Winslet, her co-star in Divergent, as a role model – she never hid in her trailer, she knew everyone’s name and was always up for a chat. “Kate just loves acting, and that’s it.”

Woodley, who starred in teen pregnancy melodrama The Secret Life of the American Teenager, also supports her Divergent character’s decisions about sex.

“I thought was neat was that Tris respected herself enough at a young age to be able to say no,” said Woodley, about the teenage romance with a brooding faction member named Four, played by Theo James. “In most movies you see nowadays, girls lose their virginity, their kissing-virginity, their hand-holding-virginity and their cuddling-virginity all in the same moment – and you’re like, I don’t remember it happening that way!”