What would Gwyneth Paltrow do?

In this exclusive interview our September 2012 cover girl Gwyneth Paltrow explains how she manages to perfectly balance family, friends and celebrity. 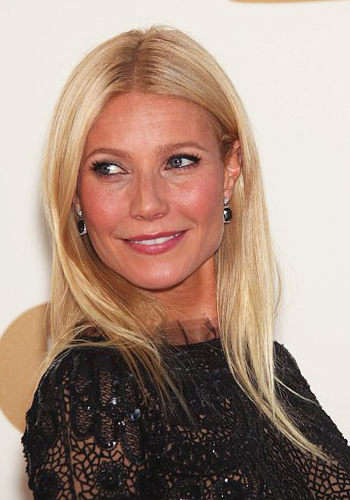 I’m sitting across from Gwyneth Paltrow, asking her about her perfection as if it were some kind of separate entity rather than a tapestry of qualities, like impossibly shiny hair and megawatt charisma, that make up her very public persona. I find myself thinking that if the two of us were in some New Agey visualization course— instead of a swish new London hotel—I would have to describe her perfection as if it were an object: a smooth river stone warmed by the sun, I’d say.

It has been raining in this foggy town for the past two days, but today the sun is shining through the window like strips of gold. Paltrow, 39, is kicked back on a couch in an oversized long-sleeve Alexander Wang tee and slouchy elastic-waist leather pants. (These may sound dumb, but, trust me, they’re perfect.) On the subject of her much-discussed perfection, Paltrow is thoughtful. “I think it’s dangerous,” she says carefully. “I totally understand that I’m this character, and there is a lot of positive projection and a lot of negative projection, but I think that, really, nobody is perfect.” She pauses, looking straight at me, her eyes sparkling as if for emphasis. “I’m a very flawed human being.”

But how flawed can she be? One of the youngest women ever to win an Oscar—an image of pink tulle burned into everyone’s sartorial subconscious— she shrugged off Brad Pitt’s proposal, married rock star Chris Martin and has dedicated the past 10 years to raising a family and building a lifestyle empire. Now she has delicate creases around her eyes that somehow make them look even bluer.

I’m reminded of a line Julia Roberts delivered in My Best Friend’s Wedding (basically the Dalai Lama of late-’90s romcoms) about Cameron Diaz’s candy-sweet character. “What I mean when I say ‘annoyingly perfect,’” huffed Roberts, “is that there is nothing annoying about her perfection. It is vulnerable and endearing. And that is annoying as shit.” Earlier, in an attempt to distill the actress’ allure, I chatted with Eyan Allen, creative director for Hugo Boss, who helped sign Paltrow as the face of the brand’s upcoming fragrance Boss Nuit. “To be such a celebrity and also come across as approachable is not so common,” he said simply. “This is why I think women really admire her and aspire to be her.”

I can relate to that. I want to be the one laughing backstage with my besties Beyoncé and Jay-Z and sampling cured meats in Spain with Mario Batali before writing a bestselling cookbook.

I need to know if, in Sliding Doors fashion, I could actually become Gwyneth (of course not) or learn to be Gwyneth-like (maybe?).

VIDEO: Learn how to get Gwyneth’s sleek hairdo right here!

Get Gwyneth Paltrow’s life lessons starting on the next page…

The first roadblock on my path to enlightenment arrives swiftly. Despite the fact that her lifestyle site, Goop.com, dishes up tips like an overworked cafeteria lady on everything from how to wear a silk jumpsuit to where to eat in Nashville, Paltrow doesn’t like giving advice. “It’s about sharing information,” she gently corrects me. “I think advice is sort of like ‘I know this and I’m sharing it with you,’ which is not what the site is about… It’s about the things I find interesting that I think other women might find interesting. For some people, it won’t be their taste, but for the people who do respond, they seem to really value what I’m saying.”

In that spirit, I present A Layman’s Guide to Gwyneth: advice on being from the lifestyle guru herself. I’m not letting the semantics of the word hold me back.

“Exercise is the key for me: to be able to move your body and feel like you’re
detoxifying, to feel grounded and in my body and have strength,” says Paltrow. “Even if it’s just 15 minutes of yoga to get the blood going.” She laughs. “And then I can eat whatever I want.”

LESSON #2 “Don’t apologize for having a family.”

“I don’t have the time to go do
movies all the time like I did in my 20s, and that’s fine. That’s great,” she says with a smile. “But for me, I think that this is where my success is: having nice kids and a relationship that I’m still into having basically 10 years on.” Later in our conversation, she circles back to that notion of balance. “That’s the modern woman: someone who can do whatever it is they want to do and do it to whatever degree they want to do it and not let go of femininity or motherhood if that’s what they want to do.”

“I’ve learned that if I’m making breakfast for the kids and we’re doing the school run in the morning, then I have to put my phone down—because otherwise I feel like I don’t do anything well,” says Paltrow. “So I have to say to my kids ‘I need 15 minutes—I’m going to go into this other room. I need to make this phone call or write this email.’ Then they know, and they don’t feel frustrated that I’m there but not, you know?”

LESSON #4 “Your kids grow up and they leave home, and men sometimes will come and go, but you will always have your sisters.”

“Outside of my children and
my husband,
my girlfriends are my…” She stops to refocus. “They inspire me, make me laugh, make me mad. I feel very blessed to have really close girlfriends—some of whom I’ve met recently, some of whom I’ve known since I was four years old.” But when I mention that some friends, like the aforementioned crazy Crocwearing chef Mario Batali, don’t seem like obvious kindred spirits, she just laughs. “I just like good people. They could be from anywhere. They could do anything. I just like a warm, thoughtful, wise, funny person.”

LESSON #5 “I don’t read things about myself.”

“I was very interested sociologically in why people had such a strong response to [Goop] because to me it was this very innocuous thing from a place of love. I didn’t realize it was a risk I was taking,” explains Paltrow. “I understand, probably better than most people, that if somebody judges me that doesn’t know me, then they are really talking about themselves—because that’sreally the only thing it can be. So if I came across something negative in my 20s, I would have been like ‘Why don’t you like me?’ But now I know that it has absolutely nothing to do with me. It makes me feel sad that there are people with so much anger or jealousy or whatever it is.”

LESSON #6 “We just need to forgive ourselves of any garbage in our past.”

“I hope that for the rest of her life, [my daughter, Apple] can see herself the way she does as an eight-year-old. She’s so comfortable with herself. She thinks she’s really pretty but not in a weird or vain way. She has real confidence.” Paltrow seems to pick up steam on the topic of self-belief. “We get hurt along the way, and we acquire these misunderstandings about ourselves that we’re not good enough people. I think that if we can let go of those misunderstandings and know that—as cheesy as it sounds—we’re all perfect souls, then that’s how you get confidence. Even if it’s something that someone would judge you for, say ‘I did my best in that moment and I’m going to let go of the guilt and the shame.’ I think that’s when you start to feel beautiful: when you stop judging yourself.”

“I can’t do anything too fussy. I took the kids to school this morning and now I’m here, so I was probably too dressed up for school and now I’m too casual for this,” she says with a smirk. But her long-time stylist, Elizabeth Saltzman, is quick to jump in when we chat later that day. “A lot of people say ‘It’s easy: She’s so beautiful, she’s so tall, she’s so perfect.’ But I think that actually makes it almost harder because people expect so much from her style that you have to keep pushing fashion rather than following it,” says Saltzman. “She’s accomplished, she’s funny and she’s a girlfriend. She’s a solid girl.”

I tried to be like Paltrow. I really did. I rose early, stretched and got my blood flowing, sweating out the toxins long before my morning meetings. Within weeks, the tendons in my knee popped like a saggy old birthday party balloon. And multi-tasking was a drug I couldn’t kick—even after I burned my forehead because I was texting while using a curling iron. I’ve never been a fussy dresser, so I thought I could channel her that way—until a publicist emailed me a snap of myself with Paltrow. I’m wearing my favourite Alexander Wang cape and look pained. She’s smiling and appears to be cloaked in magic.

Elegance, so it seems, is not born of stretching and unfussy clothing alone. And that’s the kicker: Despite how much we may want to be Paltrow, we can’t be. Stars are not just like us, despite what the tabloids say. They’re richer. More charming. Better dressed. That Paltrow is able to convince us—me—even for a moment that she’s one of us is perhaps her most infuriating talent.