What we couldn’t print from our interview with Charlie Hunnam

The outtakes from our revealing ELLE man conversation with the candid actor: Charlie Hunnam talks life on the Sons of Anarchy set, teenage rebelliousness, and why walking away from 50 Shades of Grey nearly gave him a nervous breakdown. 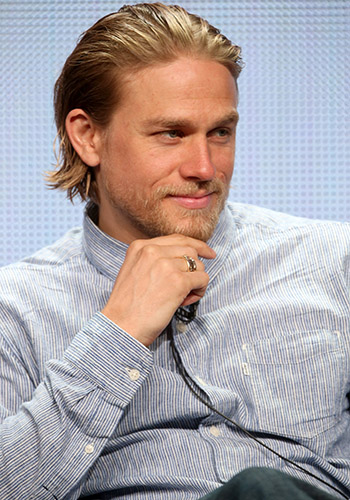 Actor Charlie Hunnam opened up about (his) manhood in ELLE Man — and while the final piece covered everything from full frontal nudity to his training regime, there just wasn’t enough room in print for everything the Newcastle, U.K. native shared with us. And because we know you can’t get enough of the King Arthur star either, we’ve combed the cutting room floor for the bits that were too juicy not to see the light of day, and present them to you raw, unabridged…and just as Charlie told them to us.

“We all loved that world and loved these guys and invested in it so deeply that we sort of made it real for each other. Some of those dynamics – it’s sort of silly from the outside, and it’s sort of silly to talk about, but the reality of it – like those dynamics became so real for us, they bled into real life. Like my relationship with Ron Perlman, for no good reason, got very, very contentious. We gave each other a wide berth, because we’re both professionals and we’re both gentlemen so we’re not going to sit down and argue every day, but it got really weird between us. And in hindsight, the only way I can understand that was that it was the creative dynamic bleeding into our personal dynamic.”

READ MORE: 8 hot Irish guys with the most charming smiles

The most rebellious thing he’s ever done (the complete, extended verbatim version of this story):

“I was supposed to go to Florence – I was 15— on an art history trip with the whole class. And our teacher at the time, Mr. Day, decided that he wasn’t gonna take the liability upon himself of taking me and my friend, Rupert, to a foreign land. He said that he believed us to be collectively “a menace to society” and he wasn’t going be responsible for us in Italy. We were doing our GCSE’s, which were the highest levels of exams, and he had all this great acrylic paint stored away in his office, that our parents paid for, because like, you know, it’s the school’s paints…but we were using all this shitty poster paint that you’d let kids use. And I was like, “Yo, homeboy, what’s with the acrylics?” and he just wasn’t feeling it. So he didn’t take us to Italy, we had to stay. We got a substitute teacher who didn’t know anything about how the shit was arranged, and so I told her, that we were of course allowed to use the acrylic paint, why wouldn’t we? So I painted this giant picture of a crushed up Coke can, and he came back, and this bastard was so angry that I’d been such a rebel and used his fucking precious paint, that in front of the whole classroom, he ripped this painting up. It was maybe the best painting I’d ever done. I’d spent all week on it. He ripped it up in front of me, and I started to feel myself go. I was so angry and humiliated and sad that this thing that I loved that I’d created was destroyed that I felt myself starting to cry. And that was not fucking acceptable for me, at that point in my life, where I was, in front of all my peers. We had these old art scissors that you can take apart and sharpen, and they have screws in the middle, so if you get a coin, you can tighten them up, and they became like a throwing star. All day long I would throw them at the wall, and I could hit a fucking bull’s-eye, no problem. We’d bet each other how accurate we could be with the scissors, all the time. So Mr Day goes back into his office after ripping my painting up. He walks back out, and I said, “Oy, Mr. Day,” and he looked at me, and I threw the scissors at him and they stuck into the door frame parallel to his head. I was like, “Do not fuck with me, man”. And that was it, they expelled me from school.”

On walking away from 50 Shades of Grey…

“I was never cool with it. It was absolutely heartbreaking. I thought I was gonna have a nervous breakdown over the whole thing. It was a disaster for me. I just got in too deep, I committed myself. I’ve pitched loud and fast to anyone who would listen to me the virtues of being super selective with work, and not working too much, and just doing one thing at a time. And then the very first time I was in a position of having massive opportunity, I just forgot all of that. I was like yeah, I’ll do it, I’ll do it! I just over booked myself, and something had to go, and that [50 Shades of Grey] was gonna require an extraordinary amount of effort. And the way the schedule worked, I was only gonna have two days wrapping Sons, playing a California biker, to playing a sophisticated billionaire. So I just thought, this is gonna be a disaster. It was much more about preserving the film, even more than preserving myself. I was like, these people have bet on me, and like, literally betting a bank on me, like they bet the farm on this thing. And if I don’t deliver, then it’s going to be a disaster for me, it’s going to be a total fucking disaster for them. So, I just said, you know what, I’d rather give this role to someone who’s going to have the time and energy to do it properly, because I wasn’t in that position. I absolutely adore Sam, the director. I didn’t even know her before that, and through this whole thing she became one of my pals, and I love her, and I love Dakota. I don’t know Jamie Dornan at all, but I hear that he’s a fantastic guy. I just wish them all the success in the world. I was really nervous that maybe my bad decision making at that time, getting myself in too deep, would’ve potentially reflected badly on the film, and then I would’ve made it harder for them in some way, and that really bothered me, but I don’t think that’s actually the case. When it’s all said and done…it’s sort of ancient history now.”