And her stories of trying to hide it are hilarious. 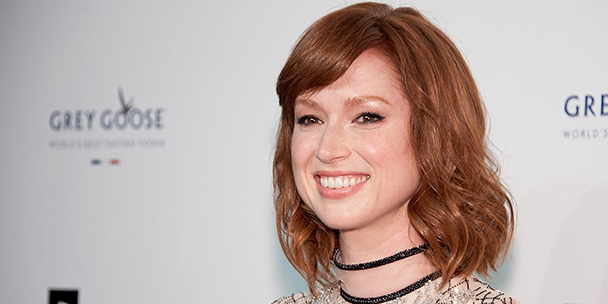 Congrats Ellie Kemper – you’re pregnant! The Unbreakable Kimmy Schmidt star was on Kimmel last night to make the big announcement…although if you hear her tell the story, most people probably already know.

Kemper—who this is the first child for—told the late night host that she was still in the early stages of her pregnancy as filming for The Unbreakable Kimmy Schmidt’s second season wrapped up. So early in fact, that she hadn’t even told her mom…or her boss, Tina Fey.

Until, that is, she needed to ride a roller coaster for one of the scenes. Worried that high speed hijinks might not be the safest in her condition, Kemper pulled Tina aside and told her the news. The pair quickly agreed that Kemper should have ‘a back injury’ and so couldn’t do the roller coaster scenes.

Which worked very well…until Kemper kept forgetting she had this ‘back problem’:

“They’d yell ‘lunch’ and I’d leap up and cartwheel to catering. You’re not supposed to do that. At the wrap party, I completely forgot,” said Kemper.

“I was dancing and my friend Ali came up and she was like, ‘How’s your back?’ and I was like, ‘It’s OK. The doctor said dancing could be good.’ It was terrible. I think everyone could see right through it.”