The return of Hilary Duff

This crossover star talks motherhood, love and her new album. 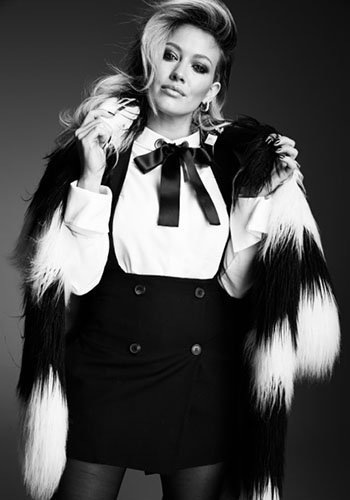 Hilary Duff is getting her nails done and tweeting to fans at the same time, exposing the delicate tattoos that line the insides of her pale arms. She’s talking to Luca, her son with Canadian former NHL player Mike Comrie, as she gets ready for the cover shoot; he is teary after an early-morning flight to Toronto and a little bored of playing with toy cars. At 27, Duff has grown up a lot in the decade since she last appeared as Disney’s Lizzie McGuire. She was the clean teen queen who wore her platinum crown with a smile while her peers, like Lindsay Lohan, fell to their knees. The actress and singer crafted a multi-million-dollar clothing empire before Jessica Simpson sold her first pair of stacked heels. And then, exhausted and over-extended, Duff stepped out of the blinding spotlight.

After a seven-year break, she’s releasing her fifth studio album. The heady mix of pop and folk, like the single “All About You,” which has already ripped through the charts, signals Duff’s re-entry into stardom. We sat down to talk to the crossover star about the growing up that happens after first loves, tattoos and fame.

Why was now the right time to release this album? “When I decided to take a break, I was burned out and wanted to do smaller things that made me happy. Then I had Luca and was just sitting and reflecting on my journey; the thing I missed most about my old life was performing and being onstage. I didn’t really go into this thinking ‘Oh, this is going to be my big musical comeback.’ I just started writing and it started to feel good in my bones again.”

Is it nerve-racking to change gears after so many years? “It is. I don’t need to work; I want to work. But I like to be successful, and it can’t be done half-assed in this industry. I feel guilty a little bit, but I know that I’m going to be the best mom when I’m a happy person, and this makes me really happy.”

GALLERY: Behind-the-scenes on our live cover with Hilary Duff

Do you think your son is getting a sense of your fame? “I think he’s starting to figure it out, but I don’t really know what he thinks yet. I don’t tell him anything about my job, but he knows Mommy’s a singer and an actress. We have this book called Goodnight Los Angeles. It’s like, ‘Goodnight, movie stars and entertainers of Los Angeles!’ and it shows people working on a set and having their names in lights. Mike’s always telling Luca ‘This is where Mommy is!’ when I’m at work.”

You were one of the original Disney child stars, but now that you’re re-entering the business as an adult, are you tempted to step out with a sexy new image, as so many others have? “It’s a scary thought because I’m not such a strategic person. When I started making my record, I didn’t have some grandiose plan about how it was all going to go down. I was more like, ‘I’m going to start writing and be who I am now and talk about some of the shit I’ve been through.’ It’s uncomfortable for me because people have always been like, ‘Well, why haven’t you gone crazy?’”

How do you answer the question “Why haven’t you gone crazy?” “It’s impossible to answer.”

How do you deal with going through some very difficult events, like your recent separation, in the midst of constant media attention? “I have a good therapist! [Laughs] I’ve dealt with [attention] for such a long time. But some of the bigger struggles that came my way in the past two years—like my separation or when my parents separated—were the first times I had to deal with people knowing about something personal happening to my family. It just felt so invasive and insensitive. It got really gross, and I think part of you gets a bit desensitized. The best way to handle it is by just owning your shit. I’m human and this is what happened. None of us is perfect.”

Even when you were 16, you came across as very confident. Is that how you remember it? “I think I’m more content now—especially since I took time out of being on tour and in movies. It was hard because [when I was 16] everything I did was watched. I had this idea of who I was, but the whole world thought I was so much bigger. Does that make sense? It was a very confusing time. It was a lot of pressure, and I became more content with myself when all the competition was gone and I could make choices for myself. I fucked up along the way too, but I got to do it quietly, which was awesome. Now, turning 27 feels weird. I still kind of feel like a kid. I’m a kid with a kid.” [Laughs]

You’re still young, yet you’ve been an influencing icon for some of the biggest stars right now, like Miley Cyrus and Ariana Grande. Does that feel strange? “All the time, because I’m a fan of theirs. I see tweets that Miley is excited that I was at her show, and when I gave Ariana an award the other day, she was like, ‘I can’t breathe right now.’ That admiration goes both ways. It’s sweet—[being in their position] just feels like such a lifetime ago for me.”

And now you’re getting back to TV, with Younger, which is airing in January. “I didn’t really mean to. My agent called me and was like, ‘I have a really good show; it’s a Darren Star show and he wants you for it.’ I said: ‘I can’t do that right now. I have Luca, and I definitely can’t move to New York.’ She told me to just read it. It was really, really good…. I either take a break or just slam myself full throttle, so here I am shooting the show and making a record at the same time again.” [Laughs]

What’s your character like in the show? “She’s a book editor who has gotten to where she is pretty quickly, but she’s still fighting to get to the top. She’s strong-willed and ambitious, yet her personal life is kind of a hot mess because she’s submissive when it comes to men. It’s nice to be able to play a role that’s so different from me in my real life! I am not submissive at all. It’s a bit of a challenge, to be honest, but she’s fun and the show has the heart of New York City in it, and it’s aimed toward women, which I love.”

Speaking about heart, did you see all those Aaron Carter tweets? He never said your name, but he was basically lamenting letting you—the love of his life—go when you were both teens. “Oh, God, I feel so uncomfortable right now. I don’t know what to say. The more I talk about it, the more I think he’s going to talk about it. We were like 13 and 14…. I don’t want him to be hurt—I don’t want to make anyone feel like that—but it’s time to move on. I have.”

You’re not still 13 going on 30? [Laughs] “What’s funny, though, is that those feelings—I’m not talking about him but young love in general—feel so real. You always kind of think about it. When you’re dating, you can never quite get that excitement again, because you’re never that age again.”

Looking back, the first guy I was totally in love with when I was 16 was such a loser. “But do you ever think about the feelings?”

Oh, I was like 150 percent invested. “That’s what I mean! You can’t ever compare to it! Why does it get weaker, that passion?”

I think it’s part of growing up. “It’s just bitter-sweet. That’s what it’s like with kids too. Luca does something that I’m obsessed with and it only lasts three weeks before it’s gone. It’s really painful to see it go by so fast. You want kids to be independent and strong, but it actually hurts when they start to pull away. It’s growing pains.”

READ MORE:
All about our live cover with Hilary Duff
Hilary Duff’s greatest selfies
Most adorable celebrity moms and their kids