The making of a 3D cover

What does it take to create Elle Canada’s first virtual reality cover? 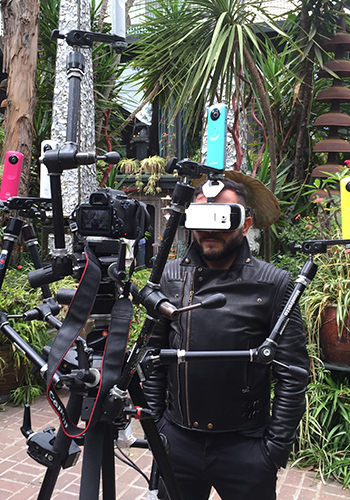 When I asked Erik Peterson, founder of the Toronto-based virtual reality firm PCP VR and the tech wizard behind our 3D cover, to describe his virtual reality cameras he laughed. “Well that’s hard to do,” he said over the phone a couple weeks after our September cover shoot with Diane Kruger. “Tell me how you would describe them,” he counters. I thought back to the shoot, and while walking the grounds of Tony Duquette’s 1949 Hollywood hills home, among the gilded design work, lush gardens and kitsch objects, there would be one of Peterson’s cameras, looking like it had just landed from outer space. I promptly tell Peterson this, and that his cameras look like spindly-armed monsters, complete with ghost-like sound effects. He starts laughing again. “Well that’s basically what they are,” he says.

Peterson, whose love of virtual reality dates back to 2003 during his university days at Columbia, notes that it doesn’t really matter how you describe the cameras, it’s the technology behind them that matters most. Peterson began using military grade equipment to build game engines at Columbia, which eventually led to his undergrad thesis in virtual and augmented reality. After graduating he took a job at Goldman Sachs and later worked as a video game producer, but has been following the VR industry for more than a decade. “Everything I did was really just prep to work with VR,” Peterson says. It was seeing the VR company Oculus take off in the last two years (which includes the company’s recent acquisition for $2 billion by Facebook) that Peterson began thinking of setting up his own business. “I bought the Kickstarter Oculus Rift developer kit back in 2012, and started testing again. From there, everything changed.”

It was through his testing that PCP VR was born, which now works out of a downtown Toronto studio with a small staff of like-minded developers (they are currently working on a VR application that could help stroke patients with brain recovery).

Collaborating with ELLE Canada to bring our September cover shoot to life, Peterson’s custom-built VR equipment was assembled using a custom rig, wide field-of-view cameras and lasers that capture data from their environment. He then uses the data to recreate the environment in 3D. “It’s a lot of data!” he says. But, as Peterson adds, it’s all that data that allows him to truly immerse readers in our cover shoot, and in the end, “allow them to experience it on the ground, from the vantage point of an ELLE Canada editor.”

Watch the cover shoot in 3D: Coinciding with the release, our Virtual Reality Cover Film will be available to download on September 9 in the app store via Samsung Gear VR and Google Cardboard. Check back here for updates!

READ MORE:
Watch the behind the scenes video of our 3D cover
Diane Kruger in 3D
Diane Kruger on set of Elle Canada’s 3D cover