The 5 biggest moments from the 2015 Oscars

From John Legend to Meryl Streep, the biggest moments from the 2015 Oscars 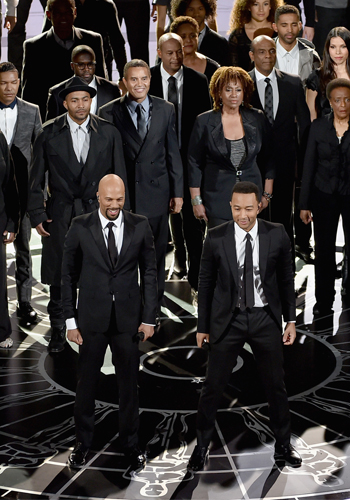 After being accused of being too white, and perhaps a little too self-congratulatory, the Oscars 2015, more than anything, strived for authenticity and sincerity. First choice was to have Neil Patrick Harris, with all his boyish charm, host the ceremonies and who spent most of the night grinning from ear to ear and asking Octavia Spencer for help (#thisisnotthehelp). But the best moments of the night really came when this was either undercut with some much-needed cynicism or when moments of true sincerity arose quite organically through the sea of gold statuettes (or Lego ones!). With that, here is our top five moments from the 2015 Oscars.

2. Best Supporting Actor winning J.K. Simmons (Whiplash) set the tone for the night saying: “Call your mom, everybody. Call your mom, call your dad. If you’re lucky enough to have a living parent or two on this planet, call them, don’t text or email, call them and tell them you love them.”

READ MORE: The best and worst dressed at the Oscars

3. It’s the GIF heard ‘round the world. You know the one, right? The one of Meryl Streep and Jennifer Lopez almost leaping out of their seat to support Best Supporting Actress Patricia Arquette’s plea for equal pay and equal rights for women. #respect

4.GLORY! A standing ovation for John Legend and Common for their song “Glory” from the movie Selma, which won Best Original Song. Many were left in tears after the performance. No doubt we’ll be listening to this song, and watching this clip, all day.

5.Lastly, when Graham Moore won for Best Adapted Screenplay for The Imitation Game he urged every girl and boy to stay weird, and to keep paving the way for the weirdos of the future. Here’s to the weirdos! And here’s to more of them winning Oscars.

READ MORE:
The best and worst dressed at the Oscars
Oscars 2015: All the beauty looks
The biggest beauty trends from the 2015 Oscars