The 10 craziest Oscar moments of all time

From the most heartfelt reactions to cringe-worthy red carpet behaviour, we round up the craziest moments in Oscar history. 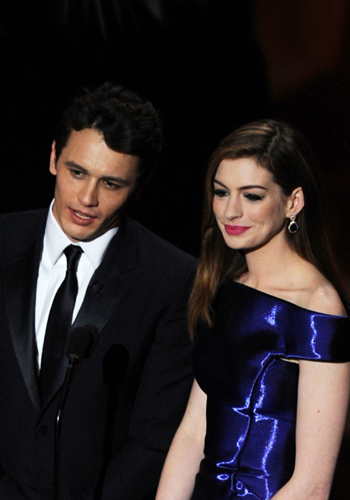 Get a room full of the best-dressed celebs du jour and in Hollywood history together, air it live around the globe, and wait—literally anything can happen on Oscar night. We put together a list of the top 10 craziest Oscar moments that made us laugh, tear up and solidify our love for Robert Downey Jr.—forever.

Craziest Oscar moment #1: Jennifer Lawrence falls—and gets a standing ovation
Year: 2013
On her way to accepting her Best Actress Oscar for Silver Linings Playbook, Jennifer Lawrence tripped over her tiered Dior Haute Couture gown, and won the hearts of everyone in attendance that night (and watching at home). She of course, called out the audience for their instant outpour of love: “You guys are just standing up because you feel bad that I fell and that’s really embarrassing.”

Craziest Oscar moment #2: Anne Hathaway and James Franco co-host the Oscars
Year: 2011
The rookie hosts established their roles fairly early in the night: whenever James Franco was dull and uninspiring, Anne Hathaway compensated with a peppy and over-the-top delivery (bless her). But the show was painful to watch. It prompted Tina Fey, who co-hosted the Golden Globes with Amy Poehler in 2013, to quip in their opening monologue that, “I have not seen someone so alone and abandoned like that since you were onstage with James Franco at the Oscars,” referencing Hathaway’s role as Fantine—an orphan who becomes a prostitute— in Les Miserables.

Craziest Oscar moment #3: Adrien Brody steals a kiss from Halle Berry
Year: 2003
That year, Adrien Brody became the youngest male to win the Best Actor Oscar for his role in The Pianist. To celebrate, he embraced Halle Berry, who presented him with the award, in a six-second smooch. "I bet they didn’t tell you that was in the gift bag,” he declared, once he finally came up for air.

More top Oscar moments on the next page…

While most people watching at home barely register the names of agents, acting coaches or third-grade teachers that actors list off during acceptance speeches, they will take notice when you neglect one—particularly, that of your spouse. Hilary Swank forgetting to thank her then-husband Chad Lowe while accepting the Best Actress award for her role in
Boys Don’t Cry was a thing until she redeemed herself and thanked him during her Best Actress acceptance speech for
Million Dollar Baby in 2005.

In a deliberate, if failed, act of self-redemption, Rob Lowe did the one thing that you probably shouldn’t do while embroiled in a sex-tape scandal: sing live at the Oscars with Snow White (Lowe being her Prince Charming). Oh, the agony! For obvious reasons, the torturous 15-minute musical mash-up opening is the stuff of Oscar infamy.

Winning an Oscar brings out both unexpected emotions and behaviour in actors—the fact that it airs live only makes it that much more exciting for everyone else watching. Melissa Leo dropping the F-bomb while accepting her Best Supporting Actress award for her role in
The Fighter may have been one of the best Oscar moments of unbridled joy. Though some telecasts caught the curse word and censored the speech, Leo immediately gasped and covered her mouth after the unexpected slip of the tongue.

While celeb PDA is usual fodder for red carpet photographers (eliciting both awws and snaps), Angelina Jolie locking lips with her brother James Haven, is one of the more memorable and cringe-worthy public makeout sessions.

Dubbed the “meanest” host in Oscar history, Seth Macfarlane—producer and
Family Guy creator—couldn’t even get a laugh out of Robert Downey Jr., typically a good sport about being the target of many Hollywood jokes. And the stoic faces of celebs throughout the night proved that his schoolyard brand of humour didn’t fare so well with them either (see Kathryn Bigelow’s reaction to his now-infamous “We Saw Your Boobs” song). The backlash prompted the comic to tweet earlier this year that hosting was indeed a one-off gig: "Traumatised critics exhale: I’m unable to do the Oscars again," he reassured. "Tried to make it work schedule-wise, but I need sleep.”

For most actors, their career-defining moment usually comes with arrival of a golden statue as a seal of critical approval. Marlon Brando’s history-making moment came when his named was announced in the Best Actor category for his role in
The Godfather in 1973, and Native American actress Sacheen Littlefeather, who attended the ceremony in his place, took to the stage to announce that Brando “very regretfully” could not accept the accolade, in protest of the portrayal of Native Americans in Hollywood films.

The award for the liveliest, most heartfelt reaction to winning an Oscar goes to Italian director-actor Roberto Benigni, who picked up the award for best Foreign Language Film for
Life is Beautiful in 1999—even the announcement was its own magical (and Italian) cinematic moment, as Sophia Loren excitedly waved the envelope and shouted “Roberto!”, and Benigni climbed over seats to make his way to the stage.