Are you that know-it-all who is always correcting your family and friends on celebrity facts, rumours, and whereabouts? Think you're top drawer when it comes to pop idol trivia? Prove it by taking our ELLECanada.com celebrity quiz challenge. 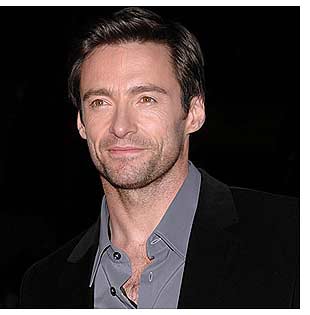 2. When Hugh was just a young hottie starting out in the biz what was his first big role?
a) Kevin, Correlli
b) Joey, Brotherly Love
c) Adam, Blue Heelers
d) As himself, Today, Tonight!

3. Not just something pretty to look at on the silver screen, which of these musicals did Hugh perform in?
a) The Boy from Oz
b) Oklahoma
c) A and B
d) Crazy for You

4. Speaking of singing and dancing, what awards show did Hugh display said talents as host for the evening?
a) The Academy Awards
b) The Emmys
c) The Golden Globes
d) The Junos

6. Keeping it spicy in the bedroom with his wife of the past 13 years, Hugh will often…
a) Do a sexy dance
b) Serenade her with a song
c) Dress in costume
d) A and C

8. Before Hugh and his wife had children how did this hunk prefer to dress for bed?
a) Completely in the nude (wearing just a smile)
b) In a thong
c) In flannel jammies
d) In just an undershirt

9. Going back in time, how did Hugh first learn about s-e-x?

b) His older siblings

10. Which actress did Hugh hide a poster of under his desk kiss everyday in elementary school and?

11. Which title did Hugh hold for 5 consecutive years?

d) One of Elle Magazine’s Sexiest Men of Hollywood

12. This actor’s not completely made of sugar. What is Hugh’s favourite swear word?

13. Which of Hugh’s films received a BOMB rating from film critic Leonard Maltin?

14. On the flip side, which of Hugh’s films recently had a box office opening of $170 million worldwide?

15. In an interview with People Magazine Hugh modestly admits that people tend to like his _______ best.

b) An antique collector

1. A Hugh Jackman was born on October 12, 1968 in Sydney, Australia and was the youngest of five children. His father raised Hugh, as his mother left the family and moved back to England when he was merely eight-years-old.

2. A Immediately after graduating from the Western Australia Academy of Performing Arts Hugh got his first big break in 1995; a role as Kevin Jones on the ABC-TV 10-part prison drama series
Correlli. Consequently, this is also where he met and fell in love with Deborra-Lee Furness who would later be his future wife.

3. C Not just a one trick pony, Hugh can act, sing and dance. In 1998 he was cast as Curly in the Royal National Theatre’s production of Trevor Nunn’s
Oklahoma. Following this performance in 1999 Hugh was nominated for a Laurence Olivier Award for Best Actor in a Musical. Hugh also played the very memorable role of Peter Allen in
The Boy From Oz. Of performing in this musical he comments,  “I sweated so much. I reckon I lost three pounds a night.” All that hard work (and sweating) paid off as Hugh won Broadway’s 2004 Tony Award for Best Actor (Musical).

4. A Hugh hosted the 2009 Academy Awards to great acclaim of audiences and his peers alike. After a song and dance recognizing the best films of 08, Hugh pulled Anne Hathaway out of the audience to sing a lovely duet. He then went on to perform another impressive duet with Beyonce. About Hugh’s performance Josh Brolin commented, “He killed it. This was the most intimate awards I’ve ever seen.”

5. D This past November Hugh was named People Magazine’s Sexiest Man Alive. Most were ecstatic calling to congratulate him—that is, except for two-time winner George Clooney. Hugh says, “George Clooney rang me at two in the morning. I was half asleep and I said to him, ‘Ah, George sweetie, good to hear from you.’ He goes, ‘Shut up, Jackman! I know what you did! You started this big campaign that’s been going on and [you] took the title away from me.’” All in good fun Hugh later quipped, “I think we ran a very strong campaign and I’m not proud of it—I can admit it now. We’re the first ones to run a negative campaign and we spent years bringing Clooney, Pitt, Damon, and McConaughey down to size. I was prepared to do absolutely anything.”

6. D Although Hugh has been known to sing a ballad or two to his wife, in the bedroom it’s all about the costumes and his sexy dance moves. When asked how he keeps the passion in his marriage Hugh said, “It’s easy with my wife. She loves the idea of me coming home in costume because it makes her feel like she’s having an affair in a good way…what works best for her is the stock broker look. She also says, ‘Do your sexy dance for me.’” Hugh describes this dance as a 80s-like, hip-swiveling number.

7. D Hugh has been getting jacked up with all the working out his role as Wolverine in the latest release X-Men Origins: Wolverine required. Although his wife admits that it is what’s on the inside that counts, she has dubbed his perfect form the ‘Body of Doom.’

8. A On what he wears to bed Hugh says, “I didn’t wear anything until my daughter was born and we had a night nanny because I was working. I walked out stark naked, and she was reading a book. Now I like [to wear] boxer briefs.”

9. C On first learning about sex Hugh says, “When I was nine, Scott Whitehead, who lived down the road, had an older brother who had Penthouse magazines. I was kind of shocked.”

10. D Hugh was introduced to Olivia Newton-John through John Travolta when the two were filming
Swordfish in 2001. Hugh confessed to Olivia that he hid a picture of her under his desk in elementary school that he kissed every single day. Aww…so adorable.

11. A Hugh’s always been on the media’s hottie radar, hence the reason he was named one of People Magazine’s 50 Most Beautiful People in the World five years running from 2000-2004.

12. A Hugh’s favourite curse word is b*llsh*t. On the other hand, his favourite word to use is panache.

13. D In 2004 Hugh turned down the role of Frank Castle in
The Punisher because he was already committed to the film
Van Helsing. Consequently, both films ended up getting a BOMB rating from film critic Leonard Maltin. As a result of his less than stellar performance in Van Helsing Hugh was also a potential nominee for the 2005 Razzie Awards, listed as an option for the Worst Actor category. Ouch…that’s gotta sting.

14. A Don’t fret, it’s not all bad for Hugh.
X-Men Origins: Wolverine opened in theatres on May 1, 2009 and brought in big box office bucks estimated at $170 million worldwide. In fact, it was the #1 film debut of the weekend. Keep up the good work Hugh.

15. A Although Hugh confesses that people generally like his smile best; he says as of late it’s more and more about his pecs. He says, “I’m just being honest!”

16. A Says Hugh, “I’m a real foodie and into good wine. So if I were going out for my ultimate night it would be eight to 10 friends with sensational wine and sensational food. I’m a sweet tooth, but I do love cheese. Ahh, good cheese, with wine—doesn’t get better than that.” All that good cheese and wine and he’s still in great shape…that’s simply not fair.

Mostly As: You rock! You are the type of person who can’t wait for the next celebrity rag to hit the newsstands so you can devour every detail, every bit of info and every gossip tidbit. All hail the celebrity trivia king and/or queen.

Mostly Bs: Celebrity trivia is just not a priority for you, and your knowledge of Hugh Jackman shows this lack of effort. You need to step your game up. Grab the latest celebrity news (in print or online) and get reading—at the very least try to remember the big headlines. Better luck next time.

Mostly Cs: You’re knowledge of Hugh Jackman is mediocre at best. You get the easy ones right, but are clueless when it comes to the more detailed questions. You’re not a total lost cause; all you need to do is get up to speed with the latest celebrity news. Hit the books (so to speak) and try again next month.

Mostly Ds: You did a so-so job on this one. You know a little more than the average person when it comes to Hugh Jackman, but were thrown off by a few of the trickier questions. You’re almost there and I’m confident you can be a celeb-trivia superstar in no time. Keep it up and you will get that perfect score.