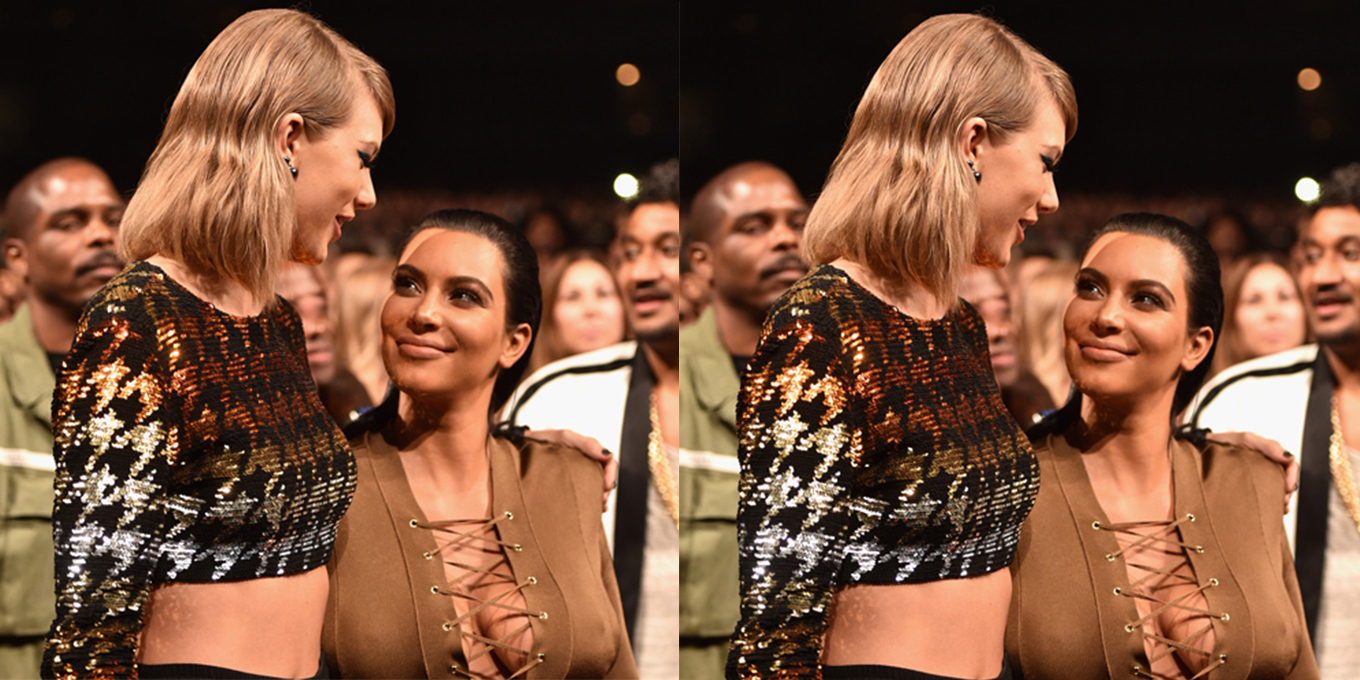 This week, Kim Kardashian West and Taylor Swift reignited their years-long feud (yes, at this point it has literally been going on for years) by commenting on a newly leaked video of a phone call between Swift and Kanye West from 2016. You may be thinking to yourself: Don’t we all have better things to devote our attention to? And yes, we do, as both celebrities make note of in their comments. Here’s what exactly what went down.

Prior to this week, we’d only seen clips of the infamous phone call in which Kanye West asks for permission to name-drop Swift in his 2016 track “Famous.” Kim Kardashian posted clips of the call, which was recorded on video by West’s team, on her Snapchat.

To refresh your memory, Swift claimed West only asked for approval of the line “I feel like me and Taylor might still have sex,” but did not mention the line, “I made that bitch famous.” Kardashian West rebutted, claiming that Swift’s publicist said the call never happened, which was why she posted a clip of the call to her Snapchat story.

On Saturday March 21, the full phone call was leaked online. West indeed asked for Swift’s permission to use her name in the song, however, he never mentions calling her a “bitch” in the song.

At first, Swift seems apprehensive to his request, but when he tells her about the line, which, at the time, was “I feel like Taylor Swift owes me sex,” she responds positively. “I’m glad it’s not mean. It doesn’t feel mean, but like, oh my God, the build-up you gave it,” says Swift.  “I thought it was gonna be like that ‘stupid dumb bitch,’ like, but it’s not.”

The original clips have been deleted off Twitter but Variety has posted a transcription of the 25-minute-long conversation (and it’s also on YouTube).

Up until yesterday, both Kardashian West and Swift had not made any public comments about the leaked footage. Swift then made the first statement, taking to her Instagram story to briefly discuss how she felt about the footage.

“Instead of answering those who are asking how I feel about the video footage that was leaked, proving that I was telling the truth the whole time about *that call* (you know, the one that was illegally recorded, that somebody edited and manipulated in order to frame me and put me, my family and fans through hell for 4 years)… SWIPE UP to see what really matters.” She linked to Feeding America’s donation page, referencing the need to support vulnerable people right now. 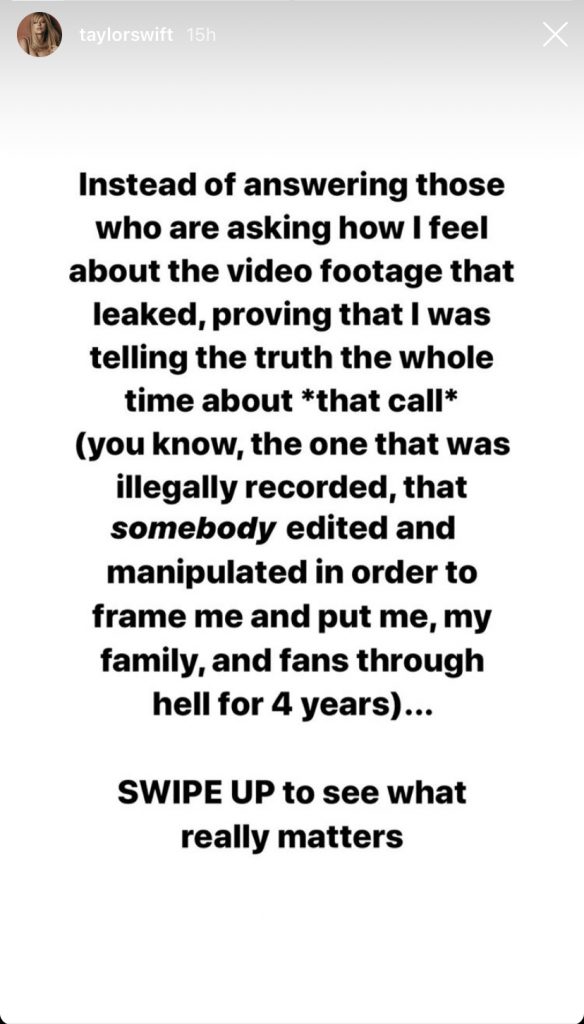 She then mentioned that she has been donating to Feeding America along with the World Health Organization (WHO) and encouraged followers to donate, too. 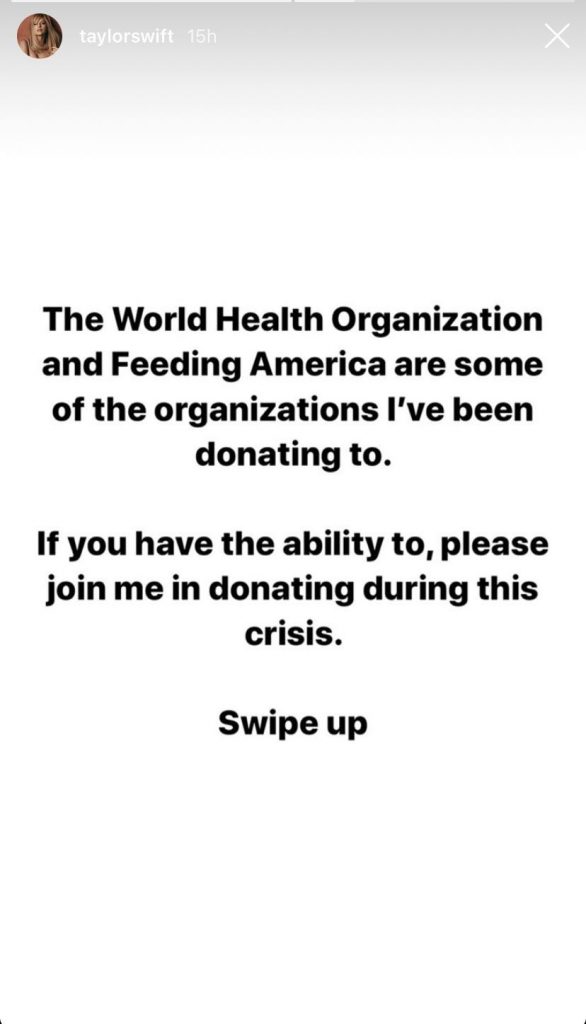 Shortly after Swift posted her Instagram stories, Kardashian West responded directly on Twitter with a series of statements. “@taylorswift13 has chosen to reignite an old exchange – that at this point in time feels very self-serving given the suffering millions of real victims are facing right now,” she wrote.

She continued to express “embarrassment” at needing to make a statement: “I feel I’m left without a choice but to respond because she is actually lying.”

Kardashian West said that Swift’s publicist’s claims that the call never happened are what led her to call Swift a liar. “The lie was never about the word bitch, It was always whether there was a call or not and the tone of the conversation.”

She denied editing the video, instead explaining that she posted short clips to her Snapchat profile to make a point. She also said that Kanye documents all his recording processes for his albums and that, “…the call between the two of them would have remained private or would have gone in the trash had she not lied & forced me to defend him.”

Finally, she apologized for “boring” everyone (even though many would argue this has done quite the opposite) as there more serious matters happening right now.

.@taylorswift13 has chosen to reignite an old exchange – that at this point in time feels very self-serving given the suffering millions of real victims are facing right now.

I didn’t feel the need to comment a few days ago, and I’m actually really embarrassed and mortified to be doing it right now, but because she continues to speak on it, I feel I’m left without a choice but to respond because she is actually lying.

To be clear, the only issue I ever had around the situation was that Taylor lied through her publicist who stated that “Kanye never called to ask for permission…” They clearly spoke so I let you all see that. Nobody ever denied the word “bitch” was used without her permission.

At the time when they spoke the song had not been fully written yet, but as everyone can see in the video, she manipulated the truth of their actual conversation in her statement when her team said she

“declined and cautioned him about releasing a song with such a strong misogynistic message.”

The lie was never about the word bitch, It was always whether there was a call or not and the tone of the conversation.

I never edited the footage (another lie) – I only posted a few clips on Snapchat to make my point and the full video that recently leaked doesn’t change the narrative.

To add, Kanye as an artist has every right to document his musical journey and process, just like she recently did through her documentary.

Kanye has documented the making of all of his albums for his personal archive, however has never released any of it for public consumption & the call between the two of them would have remained private or would have gone in the trash had she not lied & forced me to defend him.

This will be the last time I speak on this because honestly, nobody cares.

Sorry to bore you all with this. I know you are all dealing with more serious and important matters.

Regardless whose side you are on, it seems like both women agree on one thing: there are bigger problems in the world right now.