Orange Is the New Black’s Taylor Schilling is embracing the quiet life. 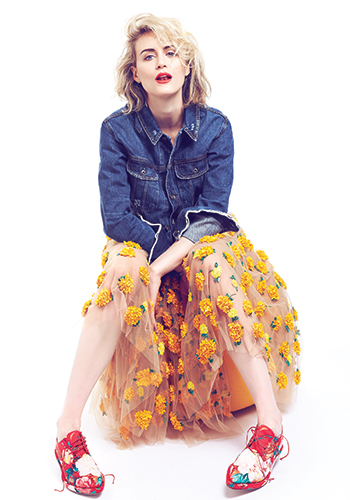 Wearing a worn-in navy-blue Céline coat, skinny black jeans and a little black cashmere sweater, Taylor Schilling quietly appears beside me for our breakfast at the Four Seasons in Toronto. “This is so nice!” she exclaims after giving me a huge hug and surveying our little booth surrounded by floor-to-ceiling windows overlooking Yorkville Avenue. I was relieved, as Schilling had requested that our table at Café Boulud be as private as possible. I would later come to understand that this request wasn’t because Schilling was worried about being spotted (she actually adores hearing from fans); she just prefers to keep things as simple and serene as possible. As she settles into the corner and folds her long legs under her, her relaxed, cool sensibility immediately comes through. It’s a far cry from her role as the high-strung Piper Chapman on the award-winning Netflix series Orange Is the New Black, which returns for its third season this month. Today, Schilling seems more like that fiercely intelligent, curious-abouteverything friend you can call up day or night for advice – or just to ponder the nature of the universe. Minutes into our chat, she’s enthusiastically discussing society’s obsession with celebrity and her own conflicted take on social media and how it hinders her desire to live an honest and authentic life.

I think most people realize that the images we see of celebrities aren’t real, but do you still feel a certain pressure to live up to that ideal? “I’m still relatively new to the business – I started just five years ago – but I can see how the pressure becomes internalized. And knowing how powerful it can be, I can’t even imagine being outside of this industry looking in. I love meeting the people I admire and seeing they’re all human – they have bags under their eyes and are dealing with their own insecurities and struggles. I think it’s so vital to keep that context in the forefront.”

I worry there is less context because of social media. In real life, you see the layers, but online it’s just this patina. “It takes a lot of bravery to be authentic and honest and to take that social mask off in order to connect with another human being. So much of what makes us who we are is smoothed away online. And what truly connects us is the wrinkles, not the smoothness.”

Participating in social media is supposed to be about making connections, but is it? “There is something so sad about going online and seeing almost everyone shouting ‘Notice me, notice me!’ Which is such a human desire—to be acknowledged. But me responding to that with some sort of ‘You’re noticed, you’re seen’ only perpetuates the loneliness. Because I’m not seeing you; I’m not noticing you. And whoever you are, you so deserve to be noticed and valued. I feel lucky to have not grown up with the Internet because it forced me to get out, struggle and be so messy.”

READ MORE: Up close and personal with Kiernan Shipka

Is it easier to embrace messiness now that you’re 30? “I think that’s one of the most exciting payoffs to getting older. I spent so long being hard on myself, but now there’s so much more kindness, compassion and ease. Well, not total ease – but I can see the trend. I can see the upward spiral.”

I love the idea of having an upward spiral! “Me too! There are switchbacks, but part of getting older is knowing that that’s okay too. If one were to judge my life based only on what they read online or in a magazine, one would think that switchbacks weren’t okay and that we always have to be moving upward. But it’s up, down and all around. We should be relating to one another over the subtleties of life – that’s what makes us human.”

On Twitter, referring to an article about surgeon and writer Sherwin Nuland’s work, you wrote, “Everybody needs to be understood.” Why did this phrase resonate with you? “I have always related to that idea in my work life, but since turning 30 I now relate to it on a personal level. He articulated it so beautifully when he said ‘The more specific I can get about my personal experience, the more universal I become.’”

And it’s the most obvious thing once you read it. What else would the answer be? “I think it resonates so deeply because it’s the truth. Everyone knows that. We know when someone is truly being themselves. To come away from an interaction with someone and know that you really shared yourself…it’s the opposite of how I feel after being online. I feel really seen when I take that risk to be myself. But you have to be present for it. It doesn’t exist with a curated self; you have to share all parts of yourself – everything.”

And yet, after two years of being the star on one of the most popular shows on television, no one really knows a lot about you. [Laughs] “I know!”

Do you feel it’s essential for actors to interact with fans via social media? “I feel that there is a part of the acting world that has gotten mixed up in the world of celebrity – as if they’re the same thing. If you’re someone who is interested in a creative profession, then you’re also required to cultivate this celebrity. They are not one and the same. I don’t know if you get more jobs if you have more Instagram followers; that hasn’t been my experience.

”That said, do you still feel pressure to share more of yourself with the public? “It has almost become a defiant thing at this point because I do not believe this celebrity Kim Kardashian culture is what I signed up for. I’d rather create something honest than try to create something for a social-media account. Besides, my brain is just way too fragile for both. [Laughs] I am susceptible to what people think; I think we all are. So it’s just easier for me to not engage with it too much.”

So who do you engage with? Who has influenced you most? “I had an unorthodox high-school experience; I shifted around to different schools. When I got to college and met Larry Sacharow, who ran the theatre department [at Fordham University in NYC], he was the first person to say ‘I believe in you.’ At that point, I just needed someone to say ‘I see you, I get you, let’s go.’ It’s an amazing thing to borrow someone else’s confidence in you; it can change your life.”

And it’s just someone saying, with conviction, “You’re great.” “It’s just simple and honest. Another person who influenced me is my younger brother. I switched schools a lot when my parents were getting divorced. We had really separate experiences growing up, but we have recently reconnected, and it has been great. He’s someone who toes his own line and is so gallant in the way he navigates the world and doesn’t really care about what people think. His presence is really inspiring.”

In an interview back in 2013, you said, “I’m interested when life happens in such a way where you have to confront yourself.” Were you hinting at some of your own experiences? “Definitely. In high school, my parents’ divorce was really difficult for me; I didn’t have that traditional relationship with a mother or a father. I had to map my own course. I really appreciate that now, and I think it has become my guiding light. I’m telling you, the moment when we completely let go in the most scary, overwhelming way is when everything happens.”

And then life hands you exactly what you need… “Right before Orange happened, I was in a period of fully questioning myself, and I came to the conclusion that either I’m going to like what I do or I’d be happy doing low-rent theatre in New York City. That bone-deep acceptance of your life – whatever it looks like – is when doors start to open and an opportunity presents itself.”

Do you think getting older allows for greater acceptance of these moments? “There is more muscle memory to it now. I know that it’s never really a crisis but an opening. When the slump happens, when the fear kicks in, I’ve experienced the cycle enough times now to know something glorious will happen. It’s like a riptide – you just have to wait it out and let it take you back to shore. If there’s anything I’ve learned in the 30 years I’ve lived on this planet, it’s that you should swim parallel to the shore, people.”