After being told to "Just look pretty and sing," the Canadian songstress adds her two cents on the record industry with her new CD. 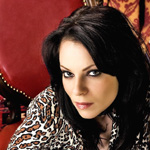 Tara Slone’s solo debut, Just Look Pretty And Sing, was completed before she was a contestant on 2005’s RockStar: INXS, the television search for the Australian band’s new frontperson, and only now has she released it.

“I was really determined to have Rockstar: INXS not be my legacy,”
explains the Toronto-based singer-songwriter. The television production pursued Slone to be on the show and it was an opportunity she felt she could not pass up, so she put her album on hold.

“It never would have crossed my mind in a million years that there would be a possibility of being the lead singer of INXS,” Slone says. “But television is so powerful, more powerful than ever in terms of launching people’s music careers.”

Slone’s music career didn’t need launching. As the lead singer of the now defunct rock group Joydrop, she released two albums, 1999’s Metasexual and 2001’s Viberate, and is perhaps best known for the single “Beautiful,” which had chart success in the America as well. Another single, “Sometimes Wanna Die,” featured Tommy Lee in the video.

Just look pretty and sing
Many of the songs on Just Look Pretty And Sing, which she co-wrote
with her producer Jordan Zadorozny (who has also worked with Hole and Melissa auf der Maur), have to do with love in some respect, whether romantic or friendship. On “We Were Stars,” the current single, the singer feels the loneliness of going it alone as a solo artist and misses the support of her former bandmates. On “For Kate,” she responds to a painful letter she received from the ex-girlfriend of her then-boyfriend. “‘Sally Gets High’ is not a love song,” Slone points out. “That’s just about living a life of debauchery.”

For the record, despite being in a rock band, Slone has never lived a debaucherous lifestyle. She does drink, but recently quit smoking and meditates on a daily basis and goes to the gym. Now on her early thirties, she looks terrific, and the title of her album is a tongue-in-cheek response to those tactless clods who feel it’s okay to make remarks on her appearance rather than her music.

“It is a direct quote,” Slone reveals. “It wasn’t a joke. There are two sides to it. I¹m no stranger to this industry and I know that looks and public perception have everything to do with this whole game.

“I would just find on the road, I would go into an interview and the radio DJ would be like [adopts gruff salacious voice], ‘Oh God, you’re really hot.’ And it’s like, okay, I appreciate you saying that and I’m glad and lucky, I suppose, but I would rather talk about music first and be perceived as a musician and writer.”

Check out ELLE Canada’s exclusive Q & A with Hilary Duff!