Talking sadness with Inside Out star Phyllis Smith

It's okay to be sad sometimes, and more lessons we learned from this Pixar movie actress. 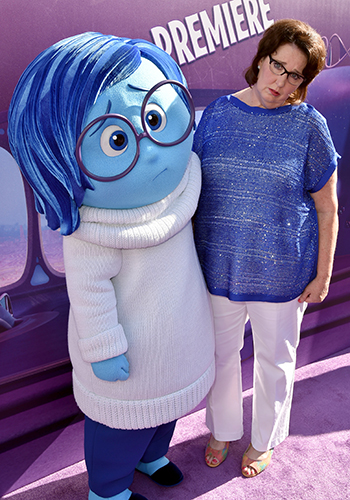 The new Pixar movie Inside Out, opened less than 24 hours ago, and it’s already setting box office records, probably because this innovative look at the world of emotions is better than a therapy session (and hilarious to boot). ELLE Canada sat down with equally droll Phyllis Smith (of The Office fame) to chat about her role as Sadness, her dangerous childhood, and how she finally learned to love herself, just as she is.

One of the central parts of the “Inside Out world” is these things called core memories—the events from your past that shape you into the person you are. Have you reflected on what your core memories from childhood would be?

At first it was hard for me to remember some of my core memories, but then they started flooding back. I had a very happy childhood— to the point of my asking my mom ‘Is there something weird because I like you still? We get along, we’re friends!’. I did not have a lot of fear or disgust or anger in my childhood. I have a brother who’s seven years older than me, and I just wanted to be a part of his group because I thought they were so cool. I was the Get It Girl, like if the ball went out of the yard, I was like “I’ll get it, I’ll get it!”. My brother had a whip – I don’t know why my parents every bought him a whip – and I would be the person standing out there and he’d wrap it around my legs. It’s a wonder I still have two eyes! Those are the dangerous core memories! That’s where fear comes in, now that I think about it.

Has doing this movie made you think differently about how you process life as an adult?

Absolutely. I find myself editing my emotions more. Even having a label for it makes me just think sometimes before I talk or how I react to something.

Another important idea is the “island” thing—these defining interests or people that make a person. Have you thought at all about what the inside of your brain would look like?

My islands would be Baseball Island, because I’m a real Cardinals fan, Dancing Island because I love to dance, although now my spirit is willing but my body is weak. I’m sure there must be some Orthopedic Island waiting for me soon!

How did it feel to be told ‘Hey, you’re the person we’d really love to embody sadness for us?’

The first time that Pete Docter and Jonas Rivera pitched their idea to me, I was just happy to be in the same room with them having this kind of discussion. It’s not a negative at all, and as she turned out, Sadness has a purpose.

Do you think sadness is an underrated emotion?

It’s always thought of as a negative – you’re not supposed to be sad, you’re not supposed to show that emotion, but it actually has an important role to play. Same with anger. Anger’s pivotal reason in the movie is for fairness- he wants things to be fair for Riley (the protagonist), and I’d never thought of that before. I’d always thought of as anger as something that was uncontrollable, or negative, when in actuality, it’s because your barometer of fairness has been battered and you’re feeling discounted. I think all the emotions have a place, and as you mature, it’s how you handle them. We need them to be a fully-functioning person.

Do you think a lot of people would be better off if they were more in touch with their emotions?

Of course! Otherwise the drugs come in! If people talked about it or worked it out in the gym, I think it helps to balance you, and for me, learning balance has been key. I’m an all or nothing personality – I would either diet or not diet, there’s not just being a normal, considered healthy eater. When I was younger, I’d diet because I didn’t think I was thin enough. Now, I don’t care!

How did you get to that place?

Oddly enough, all my life, I was never thin enough, pretty enough, or good enough, never, never, never. And then the thing that got me on The Office was the fact that I was heavy, and I was not that prettiest one – all the things that I felt were my negative things were what they bought. I wasn’t going to question it! I remember somewhere in the years of The Office, I was dropping weight, not consciously, it was just happening. I remember my boss Greg Daniels saying ‘Now, do not go Hollywood on me!’ And that just gave me permission to do whatever I wanted to do.

What was your take-away from this movie?

It’s about this 11 year old girl that’s struggling, and I’m sure there are many kids that are going though tough times, so maybe this movie will help to give them some labels to handle what’s going on. I want to see it again to see what I glean out of it this time. What did you get out of it?

I just thought it was as useful to me today as an adult to see this. I need this lesson more now!

The fact is, they did their homework, and they didn’t put concepts out there that didn’t have some kind of relevance and truth. Everybody goes through emotions.

And last of all…what is your favourite sad song?

Golly. I used to like country music a lot, and Reba MacIntyre has a host of sad songs. I could teasingly say Celine Dion “All by Myself”, but that’s not really the reality.