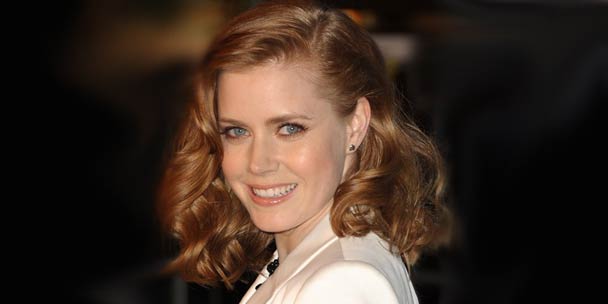 While Amy Adams’ friends were gushing over Patrick Swayze wooing Jennifer Grey in Dirty Dancing, Adams had a different cinematic crush. The then 13-year-old was obsessed with the turbulent love affair between a headstrong woman and a rogue during the American Civil War in the South. “I watched Gone With the Wind, and it changed my life forever,” she says, smiling. “I was like, ‘I am Scarlett O’Hara.’ She was a survivor. I think that’s why I identified with her.”

It was a prescient role model for a young actress who would become a “10-year overnight sensation” when her indie film Junebug screened at the 2005 Sundance Film Festival. Three years earlier, Adams landed what was to be her breakout role, playing the naive fiancée to Leonardo DiCaprio’s character in the film Catch Me If You Can. The movie was a hit, but it didn’t land any parts for Adams. With her 30th birthday looming, she accepted the role in the low-budget Junebug, but her expectations were modest. She was discouraged and considered leaving the business.

But after the film’s much-lauded debut at Sundance — and the awards that followed, including her Academy Award nomination for Best Supporting Actress — Adams’ career went into overdrive. When she took to the stage two years later to sing the Oscar-nominated tune “Happy Working Song” from the film Enchanted, she was indeed happily and gainfully employed. The film grossed more than $340 million, and Adams — who had once struggled to pay her rent — was now in the number nine spot on Forbes’ list of Hollywood’s best-paid actresses.

Adams returned to the Sundance Film Festival last year with another indie offering, Sunshine Cleaning. In the film — which opens this month — Adams plays a single mom who quits cleaning houses and launches a lucrative crime-scene cleanup business with her un­reliable sister, played by Emily Blunt. “I was completely intimidated when I found out that Emily had been cast for the role,” says Adams. “I had seen My Summer of Love, so I was like, ‘That girl has chops! I have to bring my A game.’ It felt like she was my sister. It’s weird when you meet someone and there’s such a connection.”

The affection was mutual. After Blunt read the script for Doubt, she insisted that Adams go after the part — even though another actress had signed on. Adams won over the director and landed the role of the young nun, playing opposite Philip Seymour Hoffman and Meryl Streep. “Working with Meryl was amazing,” says Adams, who received Golden Globe and Academy Award nominations for her performance. “She was very kind. She wasn’t the disciplinary nun with me!” Although Adams doesn’t share any screen time with her, the 34-year-old actress co-stars with Streep in another film, Julie and Julia. The movie — which is expected to be released this August — blends Julia Child’s musings about life in France with tales from Julie Powell’s memoir of the year she spent trying to master recipes in Child’s Mastering the Art of French Cooking.

Adams doesn’t take her success lightly: From her first nonpaying gig in a community production of Annie to her years doing dinner theatre in Colorado and Minnesota to landing her first film role in Drop Dead Gorgeous in 1999, she remembers all too well the setbacks and disappointments. When asked about her first big break, Adams laughs. “How long do we have?” she says, adding that it was Kirstie Alley — whom she met during the filming of Drop Dead Gorgeous — who first encouraged her to move to Los Angeles. “I thought acting in films was something that special people did,” recalls Adams. “Sometimes you just need a kick in the butt.”

Aside from Alley, Adams credits her fiancé, Darren Le Gallo, with changing her life. The pair met eight years ago in acting class at a time when Adams’ career had stalled. “It’s really important to have someone to remind you who you are,” Adams has said in past interviews. Her parents and six other siblings also ensure that she keeps her life in perspective. “I know my family has had a lot to deal with because people are always asking them about me,” she says. “I’m not the best communicator, and often they don’t know the answers. I know it’s frustrating for them, but I just say ‘Tell them to stop asking you questions!’”

Adams may have been named one of Vanity Fair’s Top 10 “fresh faces” for 2008, but she still finds it amusing that she’s considered one of Tinseltown’s It girls. “I always think that It girls have a certain kind of sexuality that I don’t have,” she says, laughing. And how does she manage to avoid the media coverage that It girls generate? “I’m older, so I don’t have a nightlife that involves anything more than getting Mexican food. The only headline would be ‘How can she be so thin eating all that Mexican food?’”