Starburst: Kristin Booth is on the rise

Kristin Booth comes to the emotional rescue in her latest indie-beat roles. 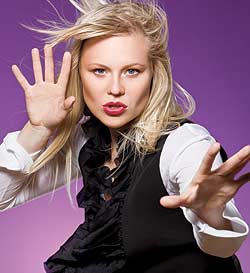 Kristin Booth is Canada’s blond-haired Tina Fey. Known for her quirky, bright and funny sensibility, she has played a number of characters who bring a joyful lightness to rather dark and dire circumstances. Case in point: Crackie, the Newfoundland-based drama by director Sherry White. In the film, which debuted at the 2009 Toronto International Film Festival (TIFF), Booth plays a cheerful hairdresser who mentors a troubled young woman who’s finding her way in the world while trying to cope with her wildly dysfunctional family. The 35-year- old actress plays another mentor of sorts in Defendor, which also debuted at TIFF. For this offbeat superhero flick, Booth plays a woman who befriends a man (Woody Harrelson) who is intent on ridding the world of crime and evil. “Woody plays a sweet, noble character who creates a superhero alter ego named Defendor,” explains Booth. “My character’s family kind of adopts him after his vigilante antics get him into trouble.”

In her other film out later this year, it’s Booth’s character who requires a little onscreen TLC from her co-star. In At Home By Myself…With You, which debuted at the Vancouver International Film Festival last fall, Booth plays a woman who is too afraid to leave her apartment until she falls for a world traveller (Aaron Abrams) who moves in next door. “It’s sort of like Amélie crossed with When Harry Met Sally,” she explains.

While Booth is in demand now, it wasn’t always that way for the Kinkora, Ont., native. After graduating from Toronto’s Ryerson Theatre School in 1997, she appeared in numerous stage productions, TV series and movies of the week before landing her first feature-film role, op­posite Ryan Reynolds, in the 2003 crime caper Foolproof. In 2005, she received a Gemini for a guest-starring role on the TV series ReGenesis, and in 2009 she took home a Genie for her performance in the Canadian indie smash Young People Fucking. While Booth is often dubbed Canada’s indie-film darling, she says it’s not because she’s exceedingly patriotic. “There are so many talented people in Canada. I want to be in their films!” Away from the acting world, Booth volunteers with Shelternet.ca, Canada’s first and only national online resource and support network for abused women and their children. “This group really struck a chord with me. All these women trying to help other women — it’s amazing!”

Read more
One-on-one with Kristin Booth
Wardrobe malfunctions: How to fix a fashion mishap
Check out our behind the scenes video of the photo shoot with Kristin