Singer Santigold on the difference between performance and reality

Spoiler: They're not even remotely the same. 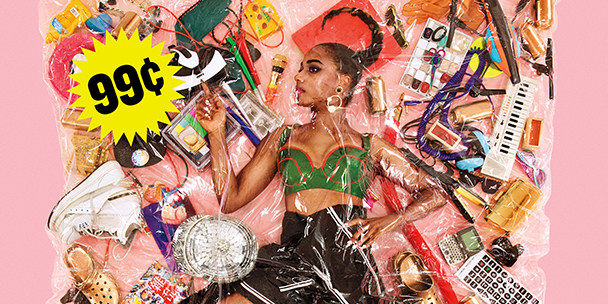 On the day we caught up with Brooklyn-based Santi White, better known as genre-bending indie musician Santigold, NYC was in the bull’s eye of a massive snowstorm, but the 39-year-old singer was “easy ridin’” on her way into Manhattan, joking about how her survival plan involved getting a satellite phone “like the one I had when I climbed Mount Kilimanjaro.” (Santigold was part of Summit on the Summit in 2010, when celebrities like Lupe Fiasco and Jessica Biel tackled the mountain to raise awareness about clean-water initiatives.) As we discussed the “moment of stillness” that that climb represented in her career, the conversation turned to social media, attention spans and #goals, all punctuated by the occasional sound of her car’s turning indicator as she made her way through traffic.

Your third album, out now, is called 99¢. Why?
“Making this rec­ord was about making art out of the reality that I’m a brand and a product. I have to figure out ways to constantly sell myself and put up this facade of a perfect life, a perfect artist. It’s taking a snapshot of where we are as a culture and talking about it in a satirical and playful way.”

It’s like we’re at a place with social media where everyone—not just celebrities and artists—feels like they have to present a perfect version of themselves to the world.
“Everybody is viewing themselves as a product for sale. You’re marketing a retouched version of your life on Facebook. People’s self-worth and identity are measured by how many likes they get, and they’re seeing all these pictures that are Facetuned and Photo Wondered and they’re like, ‘I don’t look like that.’ There is no distinction between the virtual and the real anymore.”

Where do you think we go from here?
“That’s what I’m trying to figure out! That’s the job of art: to be a mirror and hold up the current reality of culture so we can take a step back. I don’t think there’s that much reflection happening anymore in society—even artists aren’t sitting and thinking, because we spend 70 percent of our time marketing our art so we can make a living. What if I had more time to spend on my music and my art and my writing? Instead, I’m fighting for attention because of this ADD culture. I just think there needs to be a moment of ‘Where are we headed when people don’t know how to communicate in a real space and where values are shifting so much?’ People on YouTube are making $10 million a year opening toys—it’s absurd.”

Does your album offer any solutions?
“I really believe in the power of the individual. I also just want to point out that there is something very wrong with where we are. I’m not trying to be super-political, but in America we’re at this place where it’s very real that we might be electing a TV star [Donald Trump] to be president. And I think that’s from people not knowing the difference between a performance and what would really happen if that person is running the country. I don’t think people are making a distinction between virtual and real anymore, and that’s a scary place.”

All the swooniest moments from Prince Harry’s trip to Nepal