Sharon Stone believes in guardian angels, love and a life dedicated to service. 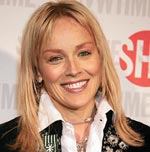 You don’t expect a Hollywood star like Sharon Stone to answer her own phone with a husky “Hello, this is Sharon.” But that’s exactly how surprisingly unpretentious this actress/activist is. Stone is promoting her book, Something to Hold (Assouline), a project about guardian angels that she worked on with her friend, photographer Mimi Craven.

“We purposely made it small so you could put it in your purse or on your nightstand,” she explains. “I put my own handwriting in it, so you could feel free to write on the page with me. I want you to go on this journey with me.”

The journey that Stone is referring to is to go to a place of comfort and compassion. As chairman of the American Foundation for AIDS Research (amFAR) Campaign since 1995, she has been on the road for more than 10 years meeting thousands of people who are suffering from the disease or working on a cure. “During these trips with Mimi, many late evenings were spent talking, crying and figuring out how to help people,” says Stone. “Sometimes when you are suffering or just feeling sad, it’s nice to have something to sit with, so we came up with the idea of the book using Mimi’s photos of angel sculptures.”

Stone’s favourite image is of one of a children’s cemetery in northern California. “There are tons of tiny, tiny, tiny headstones, and the fog is coming through. It’s just amazing!” she explains. “We’ve been in orphanages holding babies whose parents had died of AIDS, and you knew that no one was going to adopt them. Then we’re gone to talk to businessmen and tried to get them to put down their sandwiches and listen. There’s such desperation to try to get anybody to do anything.”

Photo courtesy of Jerome Ware/Zuma Press/Keystone PressWhen Stone accepted the Harvard Foundation’s 2005 Humanitarian Award for her tireless work as a fundraiser and advocate for AIDS research, she was compared to Nelson Mandela, whose commitment to this cause matches her own.

These days, Stone’s humanitarian activities and her career seem to be on a tear. Her performance in the film Broken Flowers has garnered high praise; there is a buzz about her two upcoming movies Alpha Dog and Bobby; and, at the ripe age of 47, she has landed a coveted Christian Dior contract for the Capture skin care line. Stone also hopes to be named a peace embasasador by the United Nations. “When I left the business and moved to San Fransisco,” she says, referring to her former marriage to former newspaperman, Phil Bronstein, “I went to the most bottom part of my life. I found my greatest unhappiness and my worst health. Now one part of my life and career is over, and another one is beginning. I’m getting more and more rewarding parts.”

Does Stone believe that her stardom, which she says she always felt destined to achieve, is in aid of a bigger purpose? “Someone who knew Roy [London, her friend and acting coach who died of AIDS in 1993] told me that Roy once said, ‘She thinks she’s going to be a movie star; she doesn’t know she’s going to be govenor of California.’ I believe we’re all part of this giant matrix, so what about a little compassion, if you will?”