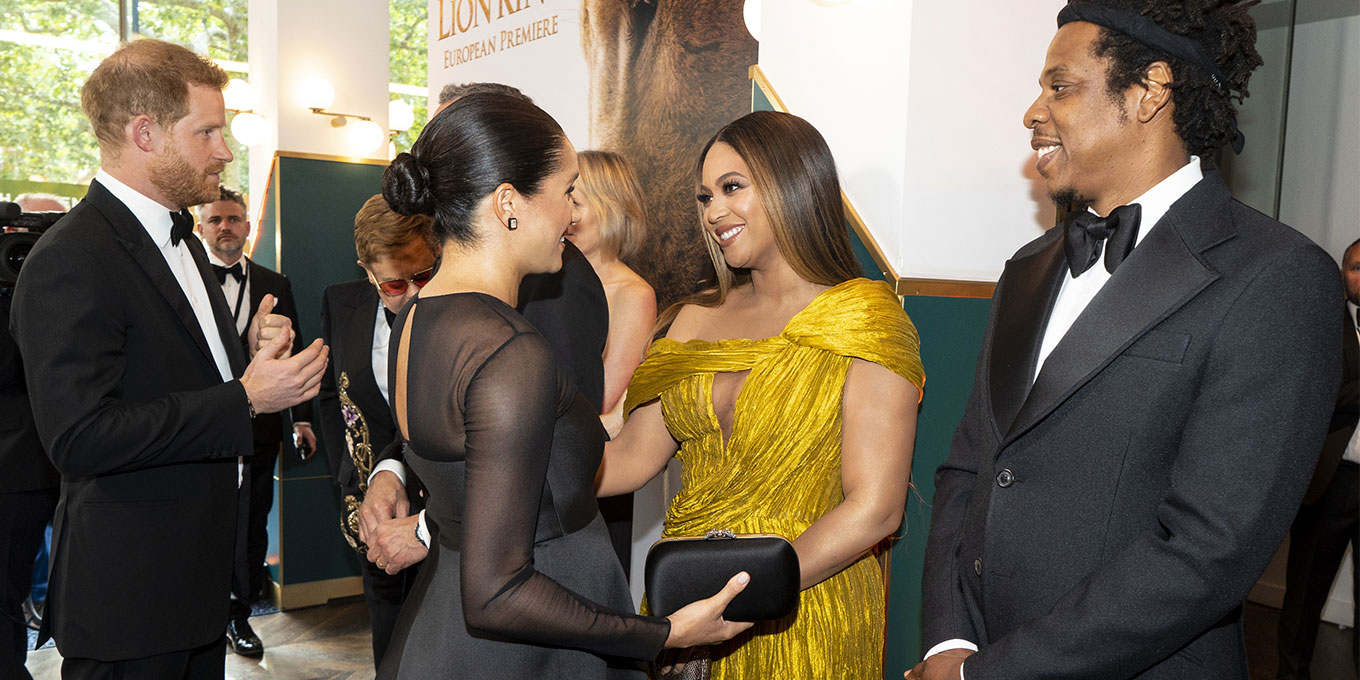 During the highly-anticipated, all-access Oprah with Meghan and Harry: A CBS Primetime Special interview with Markle and Prince Harry, which aired in the US on Sunday March 7, the Duchess of Sussex opened up about race, her mental health and the couple’s decision to step down as senior members of the royal family.

The emotional and honest interview has been met with a supportive response from many of Markle’s friends and celebrities from the worlds of sport, activism and Hollywood.

Here is a list of the celebrities who have since spoken about following the interview:

The former First Lady and author of Becoming shared her thoughts about the the Duke and Duchess of Sussex’s headline-making interview during her own recent sit-down interview with Access Hollywood on March 15.

The author voiced support for the couple and stated: ‘My hope is that, when I think about what they’re going through, I think about the importance of family and I just pray that there is forgiveness and there is clarity and love and resolve at some point in time.

‘Because there’s nothing more important than family.’

Beyoncé has also shared a message of solidarity for Meghan Markle following her interview with Oprah Winfrey.

Days later, the singer shared a message on her website, praising the mother-of-one for her bravery.

‘Thank you Meghan for your courage and leadership,’ wrote Beyoncé alongside an image of the pair meeting at the Lion King premiere in July 2019.

‘We are all strengthened and inspired by you.’

Later that year Beyoncé and her husband Jay-Z won the BRIT Award for Best International Group. During their acceptance speech, the pair stood in front of a regal portrait of Markle, which suggests they’re big fans of the royal.

Williams, who is one of Markle’s most notable friends took to Instagram following the interview to voice her admiration for the pregnant mother-of-one.

The 39-year-old tennis mogul shared a picture of a short statement on Instagram with a caption that reads: ‘I am so proud of you for being so brave, I know it is never easy. You are strong- both you and Harry. I love you. I adore you. Your friend S. [sic]’

In Williams’ statement of solidity, the athlete drew on her own experiences of racism and prejudice throughout her career.

‘She teaches me every day what it means to be truly noble. Her words illustrate the pain and cruelty she experienced,’ she said of Markle.

‘I know first hand the sexism and racism institutions and the media use to vilify women and people of colour minimise us, to break us down and demonise us. We must recognise our obligation and decry malicious, unfounded gossip and tabloid journalism. The mental health consequences of systemic oppression and victimisation are devastating, isolating and all too often lethal. [sic]’

Actor Gabriele Union, who posted a photo of herself and the Duchess ahead of the interview, retweeted a post by user @ThatsJustGroce that reads: ‘Prince Harry is protecting his wife the way he wishes someone protected his mother. [sic]’

Prince Harry is protecting his wife the way he wishes someone protected his mother.

Following the interview, anti-racism activist and daughter of Martin Luther King Jr, Bernice King, poignantly pointed out on Twitter: ‘Royalty is not a shield from the devastation and despair of racism.’ before adding ‘I’m grateful that #MeghanMarkle is still here. [sic]’

Royalty is not a shield from the devastation and despair of racism. #MeghanMarkle

Feminist tennis legend Billie Jean King reiterated King’s statements about Markle’s mental health following the interview writing on Twitter: ‘Among the revelations from the Meghan and Harry interview is Meghan’s struggle with mental health. Her honesty will hopefully lead to more acceptance and more help for those who need it. [sic]’

Among the revelations from the Meghan and Harry interview is Meghan’s struggle with mental health.

Her honesty will hopefully lead to more acceptance and more help for those who need it.

Poet Amanda Gorman also took to the social media platform and spoke of the great ‘loss’ the royal family now faces with the Duchess’ departure from senior royal life.

‘Meghan was the Crown’s greatest opportunity for change, regeneration, and reconciliation in a new era. They didn’t just maltreat her light–they missed out on it, [sic]’ she tweeted.

Meghan was the Crown’s greatest opportunity for change, regeneration, and reconciliation in a new era. They didn’t just maltreat her light–they missed out on it.

Journalist Maria Shiver tweeted a timely reminder for us all, noting: ‘It’s true what Meghan Markle told @Oprah, we don’t know what goes on in people’s lives behind closed doors. That’s something we can all remember. [sic]’

It’s true what Meghan Markle told @Oprah, we don’t know what goes on in people’s lives behind closed doors. That’s something we can all remember.

Several viewers and supporters of the royal couple reacted to their revelations with some light-hearted comments, with actor and Red Table Talk host Jada Pinkett Smith sharing a meme of her talk show photoshopped with an image of the Queen.

Comedian and actor Sarah Silverman even went as far as to suggest that the Duke of Sussex ‘should take Meghan’s last name [sic]’ following their interview.

Last Wednesday, the Palace issued a statement saying it was ‘clearly very concerned’ over allegations published in The Times that a bullying report against the Duchess of Sussex had been made by a staff member in 2018 and that their HR teams would be ‘looking into the circumstances outlined in the article’.

Spokespersons and lawyers for Meghan have responded by saying the Duchess is ‘saddened by the latest attack on her character, particularly as someone who has been the target of bullying herself and is deeply committed to supporting those who have experienced pain and trauma’. The Sussexes’ lawyers added that The Times was ‘being used by Buckingham Palace to peddle a wholly false narrative… based on misleading and harmful misinformation’, ahead of their interview with Winfrey this Sunday, according to the newspaper.

On Tuesday March 9, Buckingham Palace released a statement on behalf of the Queen which reads:

‘The whole family is saddened to learn the full extent of how challenging the last few years have been for Harry and Meghan.The issues raised, particularly that of race, are concerning. While some recollections may vary, they are taken very seriously and will be addressed by the family privately.’

‘Harry, Meghan and Archie will always be much loved family members.’

Prince William Breaks Silence on Meghan and Harry’s Interview, Insisting Royals Are ‘Not a Racist Family’
The Queen Releases Statement on Meghan Markle and Prince Harry’s Oprah Interview
Meghan Markle Shares Exactly What Happened When She First Met The Queen