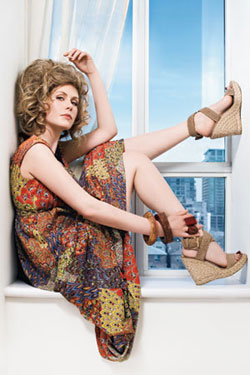 When Lisa Lobsinger first joined Broken Social Scene in 2005, she wasn’t just becoming another member of Canada’s most beloved indie superband; she was joining a family—a sometimes chaotic and incestuous family, but a clan nonetheless. “I think I was the first person to join the band that they hadn’t known for 15 years,” she says, laughing. BSS, which is known for its infectious pop anthems and experimental instrumental arrangements, has boasted a colossal cast of Canadian musical talents, such as Leslie Feist, Emily Haines of Metric and Amy Millan of Stars. Now Lobsinger joins the ranks, alongside founders Kevin Drew and Brendan Canning, as the lead female vocalist and resident siren on Forgiveness Rock Record, the band’s first full release in five years.

Prior to joining BSS, Lobsinger toured Canada with her indie rock band, Reverie Sound Revue. A year after she gave her band’s EP to Canning, whom she met at a concert in her hometown of Calgary, she was en route to Toronto. “When they called me, I didn’t know if I was going to a rehearsal or an audition,” says Lobsinger. “Brendan said, ‘No, no, we’re going on tour in Europe next week!’” Onstage, Lobsinger seduces her audience with her ethereal vocals and trademark hairstyle: an intricately messy bouffant. “When I have my hair down, people never recognize me,” she says. “It’s like I’m in disguise. I’m like Superwoman!” With a penchant for leggings (she doesn’t own a pair of jeans) and vintage ’70s dresses, Lobsinger says she prefers to play seamstress and skip the mall. “I’m not a fashionista. When we played the Junos, I made my dress.” Joining a band at its peak was daunting, but Lobsinger sought sisterly advice from the group’s indie-pop queen. “Feist told me: ‘The only way you’re not going to feel nervous is if you’re yourself.’ It meant so much coming from such an amazing woman.”