In this celebrity interview, Scarlett Johansson reveals her surprising thoughts on life, love and career. 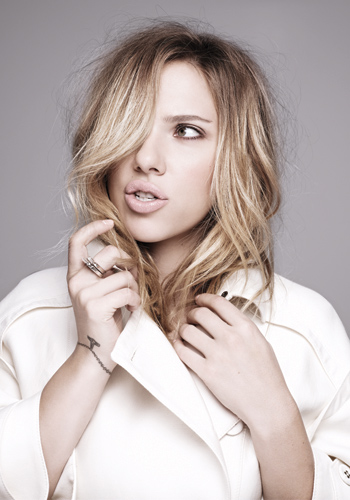 I’m incredibly jaded,” says Scarlett Johansson with a smile. She’s laughing, but her raspy voice is flat, making it hard to tell at first if she’s joking. Johansson’s hard-edged humour and deadpan delivery are all the more jarring because she’s sitting back in her chair looking like a cherub in fuchsia and black lace. The juxtaposition is like staring at a Michelangelo while listening to punk rock. I find it kind of refreshing.

She’s talking about how she has been in the business “like, forever.” In fact, the 28-year-old actress has been making movies since starring in
North in 1994. Now, 20 years later (so hard to believe), the star has touched down at the
Toronto International Film Festival for the premieres of two films. In
Don Jon, the New York native plays Joseph Gordon-Levitt’s brash girlfriend, who, in her press-on nails and rhinestone-studded jeans, wouldn’t be out of place on the Jersey Shore.

That marriage-obsessed prima donna stands in stark contrast to the part Johansson took on for Jonathan Glazer’s Under the Skin, which also premiered at the festival. In this dark sci-fi film, Johansson plays a man-eating alien. Oddly enough, that persona may actually be more in line with how some view her in real life. After an early marriage to—and, later, divorce from—Hollywood heartthrob Ryan Reynolds, Johansson has been ranked on nearly every “sexiest” list. (Trying to keep track would be as futile as trying to calculate pi.) Some cite her purring voice; others, her curves; most, her doe eyes and full lips. Her Wikipedia page has a whole section entitled “Sex symbol.” She is clearly ambivalent about the label. “I don’t feel particularly affected by that, no more so than any other person in the spotlight,” she explains. “I’ve tried to avoid getting pigeonholed as much as possible,” she continues awkwardly, waving her hands as if to shoo the whole concept away. “I don’t allow the work I do to feel like a reaction to it.”

It’s true. Johansson first rose to true fame playing a girl adrift in Sofia Coppola’s Lost in Translation and later jumped into a catsuit for the high-velocity role of Black Widow in the Avengers franchise. Her career choices are about as predictable as the weather. “It would be such a waste to just continue to do the same thing and not take a risk,” she explains. “I don’t have anything to lose by taking a risk artistically— I only have something to gain, even if it doesn’t work out. And certainly the experience of something not working out is valuable.”

Maybe that’s why she was excited to work with first-time director (and long-time actor) Joseph Gordon-Levitt. It must have seemed like a risk. She plays a rather unlikeable girl—a near caricature of a pushy, high-maintenance girlfriend—who dumps Gordon-Levitt’s character when she learns of his out-of-control porn addiction. The film has stirred up some feminist debate, but Johansson doesn’t seem ruffled by it. “I never thought about that, actually,” she says. “I was excited to collaborate with Joe because the conversations we were having were about more than the objectification of women and men—it was about the idea of these ideals that we place on one another in our own intimate relationships and the kinds of boxes that we try to squeeze each other into.”

Scarlett Johansson reveals her thoughts on marriage on the next page…

It’s timely subject matter, since Johansson has just got engaged to French journalist Romain Dauriac. She’s wearing her art-deco engagement ring but seems happy to keep her hand under the table, out of sight. Tabloids jumped all over the announcement in September with classic fervour, but the public’s enthusiasm for her upcoming nuptials seems to genuinely confuse her. “Well, I mean, why do you care?” she asks. “You don’t know me. I don’t particularly care about the
romantic life of a person I don’t know. I guess we’re all nosy in some way…. I know that people like celebrities and maybe it gives them something to dream about.”

People will have to continue dreaming, because Johansson is not likely to divulge any details. She has always shied away from talking openly about her private life, explaining that the more the audience knows about her, the less they can care for her characters. She’s sick of seeing the minutiae of her life chronicled. “I’ve stopped Googling myself—nothing good ever comes of it. It gives you an inflated sense of yourself too. It makes you feel like everyone is paying attention to you and they’re not,” she says with a laugh, before turning more serious. “[My work and my private life] are so separated in my mind that I just try to separate them in the press as much as I can and not mix the two unless I feel there is something to say that needs to be said.”

It’s clear that Johansson doesn’t back down from speaking her mind. When it’s mentioned that perhaps marriage isn’t necessary in this day and age, she engages in debate. “Everyone has a different concept of marriage. I don’t think that because we’re in the 21st century we should have evolved past our connection to marriage, whatever that is. People have all kinds of ideals, traditions, romanticisms—all those things play into marriage and modern families. I don’t feel because we’ve grown in other ways we shouldn’t do it anymore.” Despite the fact that she’s as petite as a teenager, the confidence she radiates makes her seem downright imposing.

I ask if she has considered directing, because I can easily picture her holding court on-set, working toward a larger creative vision. “I’m actually directing a film next summer, which is an adaptation of a [Truman] Capote novella called Summer Crossing,” she says, smiling. “It’s something that I’ve been working on for—it feels like forever—about six years. I’m going to finally do it!”

It seems like a natural evolution for Johansson, who essentially “grew up in front of the camera.” In fact, she speaks about the film lens like a member of the family. “My relationship with the camera is a very intimate one. I remember when they switched to digital and I missed the sound of the film,” she says wistfully. “I continue to be even more interested and stunned by the relationship between an actor and a camera—that high of everything clicking and that it has been captured and that it’s there forever…. It’s very profound.”

Though the Capote novel she has been adapting (his first novel, fittingly) tells the story of a young New York girl torn between love and expectation and self-doubt, there don’t seem to be any comparisons to Johansson’s life. Not anymore, at least. She smiles again and crosses her legs. “I feel most confident now.”