After the lies are exposed, Robin Wright Penn warms up to the idea of love in her new film. 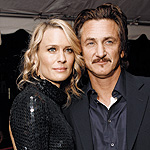 In the film, the Texas-born former model plays Liv, the live-in girlfriend to Will (Jude Law), a successful architect. From the opening scenes, it’s apparent that the couple has drifted apart: Will is focused on the gentrification project he’s working on in London’s Kings Cross area, while Liv has forsaken her work as a documentary filmmaker to devote her time to being with her emotionally troubled young daughter. After Will’s new office is broken into twice, he becomes obsessed with tracking down the thief — and does. Instead of reporting him, he follows the young boy home and later embarks on a sexual relationship with his mother, a struggling Bosnian refugee (Juliette Binoche). Meanwhile, Liv is seeing a therapist and retreating even further into the closed, caged world she has created for herself and her daughter.

Risksy affairs
Wright Penn adds that most people in committed relationships take risks to experience their desires when they’re hiding a truth that needs to be communicated. “The affair creates a mystery and an endeavour that isn’t healthy,” she says. “The minute it’s revealed, it’s not as much fun. It’s not as scary or exciting. I think it works in reverse with somebody like my character, who is so guarded and doesn’t have an endeavour — the endeavour is so big that she’s crushed. I think she wants a connection so desperately, but she can’t make one. She’s so wrapped up in a bubble with her daughter and the sacrifices she’s making as a mom. But if you sacrifice so much for one person, it becomes a crime against something else — in this case, it steals from her marriage.”

After a complicated twist, the film ends with Will exposing his infidelity to spare the young thief from going to jail and, in doing so, opening the door to a reconciliation with Liv. Wright Penn favours this optimistic view of love because it reinforces the idea of the inevitability of honesty. “You have to have faith that it will all come to fruition in the end,” she says. “A person can’t be stifled for that long and survive. They either implode or explode.”
As for her own advice, gleaned from the roles she has played and her 10-year marriage to Sean Penn, the secret to a long-term relationship is simple: you stay. “There will be ups and downs, but you stay,” she says. “What else are you going to do? Go out and start all over again — and have the same baggage, the same strife, with somebody else? You can’t grow if you continue to change your relationships. If you stay, you have room to let your love build. You never think it will. You never think you can fall in love again — bigger or more — but you do.”