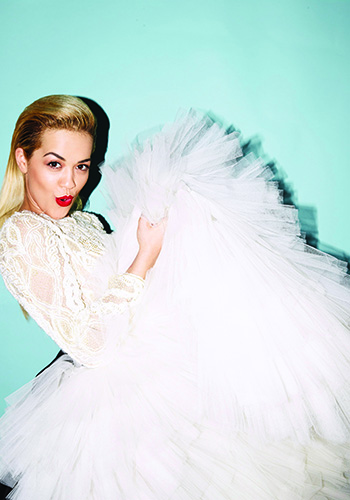 It’s hard to imagine that Rita Ora ever lacked self-assurance. But now she’s in Los Angeles, chatting about her still-untitled upcoming album and explaining that she has come into her own since her debut effort, Ora. “I have more confidence in what I’m talking about now,” says the 22-year-old. Since she stormed the charts in 2012, rocking her signature platinum waves and red lips (which are often pressed onto the face of her bestie, Cara Delevingne), she has been a brash star in both music and fashion. She rocked out on the runway at DKNY’s spring/summer 2014 show at New York Fashion Week and is now the face of the brand’s latest fragrance, MYNY. It has been a busy few years, but she’s not about to slow down.

How did your collaboration with DKNY come about? “I wore one of their fully metallic outfits, posted a picture on Instagram and underneath it wrote ‘DKNY makes me feel like a bad bitch,’ which they loved. I just naturally gravitate to what they represent.”

Have you always loved fashion? “When I was 15 or 16, I worked in a sneaker store, and I saw how crazy people were about sneakers. People would travel from different countries to come and buy them. Now I’m working with Adidas, designing a new range for them. I’m doing my own take on the Shelltoes, which is a big honour because they don’t really let anyone touch them. It’s insane.”

GALLERY: How to pull off the new sneaker trend

Was there a moment when you realized you’d arrived? “There are times when I wonder how the hell this happened! Like when I got to go to Minneapolis and work with Prince and I was walking through Paisley Park [Studios] with his dogs. There was also a moment when I performed at Glastonbury, the mother of all festivals. The main stage is in front of, like, 200,000 people, and they told me ‘You’ve been confirmed for the main stage.’ I was like, ‘What? Me?’ I’ve jumped out of a plane and it’s not as much of an adrenalin rush as performing in front of an audience.”

What Beyonce means to Rita on the next page…

Beyoncé has been a mentor to you. What has she taught you? “She’s one of the most iconic females of all time, and she’s just an amazing, stunning performer. I think that the biggest way in which she inspires me is not even through what she says; it’s just leading by example. All you have to do is watch one of her shows to see how hard she actually works. Every step is on point; everything’s together. She’s always calm. She’s always collected and professional. You can’t do better than that.”

You play Mia Grey in the upcoming Fifty Shades of Grey: The Movie. Did you want to be in the movie when you first read the book? “I was obsessed with the book. I would read it out loud on my tour bus in front of the whole band and they’d be like, ‘Can you not do that, please? We’re very uncomfortable.’ And I’d be like ‘…and then he ties her up and then touches her.’ A year later, they asked me to read for a part. I was really nervous because I knew how much this book means to fans. I didn’t want to do any role that I wouldn’t want to watch, so I think that the role of Mia is perfect—and I don’t have to be naked. [Laughs] Not that I have a problem with being naked.”

You’ve acted before, right? “When I was 12, I was in a movie. The weird thing is that I was asked to audition for the role of Hermione in Harry Potter when I was 11, but I’m quite dark and they wanted an English rose so I never ended up auditioning for it.”

That’s crazy. “It’s such a weird world. I have always been interested in entertaining, and for me that’s music. There’s kind of a crossover—you turn into this other person when you’re onstage.”