Rihanna Winced at Drake's Name and Said They're Not Friends Anymore 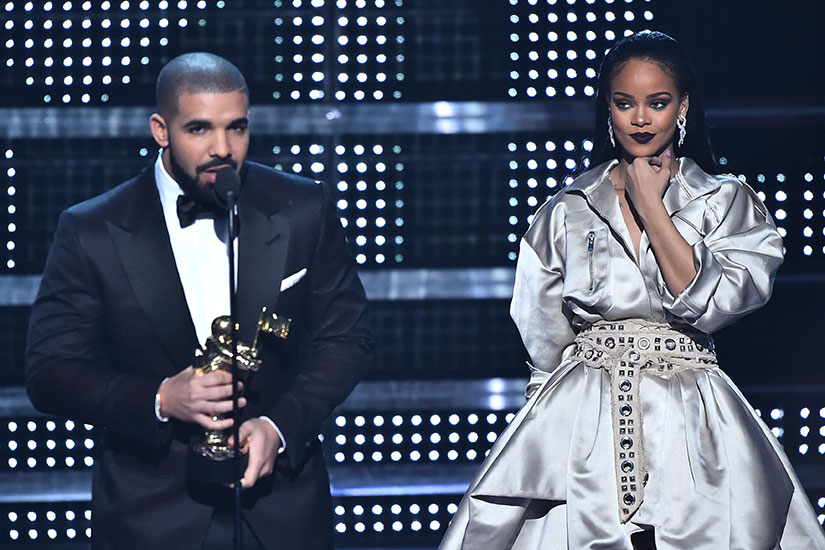 It wasn’t even two years ago that Drake got on stage at the MTV VMA awards and made a gushy, viral speech about how Vanguard award recipient Rihanna was “someone I’ve been in love with since I was 22 years old, she’s one of my best friends in the world. All my adult life, I’ve looked up to her even though she’s younger than me. She’s a living, breathing legend in our industry.” He tried to kiss her, Rihanna may not have been entirely into it, and reports sprung after they were really, actually, officially dating. Then it ended, Rihanna later started dating her current boyfriend of over one year, billionaire businessman Hassan Jameel, and now the mere mention of Drake’s name makes her wince.

Vogue’s Chioma Nnadi asked her recently about Drake’s MTV VMA speech and described RiRi wincing “slightly at the mention of the rapper’s name before her eyes glaze over with cool indifference.” She then proceeded to share what she really thought about that infamous speech: “The VMAs is such a fan-focused awards show, so having that energy around me, and knowing the people who had received the award in the past, made it feel like a big deal,” she started diplomatically. “Waiting through that speech was probably the most uncomfortable part. I don’t like too many compliments; I don’t like to be put on blast.”

Rihanna was then asked about how their friendship is now. She was upbeat, but blunt: “We don’t have a friendship now, but we’re not enemies either. It is what it is.”

While RiRi didn’t actually talk about Jameel directly, she did say this about him—and simultaneously subtly jabbed one-time enthusiastic boyfriend Drake in the process: “I used to feel guilty about taking personal time, but I also think I never met someone who was worth it before.”