Rihanna is celebrated for her bad girl edge, but is the controversial pop superstar about to show her softer side? 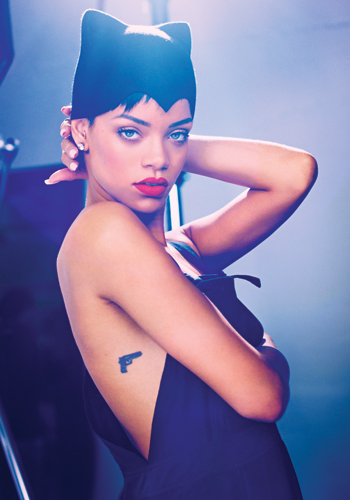 The Barbados beach is lit like a Monet. The sun is setting hazily behind Rihanna as she shakes sand out of her pearl-embellished sandals and concentrates on the stepping moves a young girl is demonstrating. Laughing, Rihanna claps her hands and tries to keep up with the other members of dance4life, a program that educates local kids about HIV and AIDS through dance. Maybe she’s having a great time, or maybe she’s just trying to put the teen, whose voice is quivering with nerves, at ease.

The 26-year-old of Internet-crushing fame surprised these kids (who I feared might black out when their idol strolled over to greet them) as part of her work as M.A.C’s Viva Glam spokesperson for 2014. The annual initiative, which started 20 years ago with a bold campaign featuring RuPaul, aims to raise $41 million for AIDS research this year alone by donating 100 percent of the proceeds from the sale of the
signature lip colour.

Rihanna seems at home here on the beach, even with tourists circling and holding their phones out like weapons. Then again, she
is home. It’s her grandfather’s birthday this weekend, and she managed to squeeze in an early stop at Chefette, the popular Bajan fast-food chain, for a spicy roti. The sun has set by the time we sit down upstairs on the balcony of a suite at the posh Sandy Lane resort on the western coast of the island, but Robyn Rihanna Fenty is still glowing. “I didn’t know that I would have to learn a dance today,” she says, cracking up. “I’m so serious! I thought I was just going to watch. I would never have worn this skirt or this long-sleeved black jacket!” She smooths her Lanvin pencil skirt and oversized top, making her
gold-and-pearl bangles jingle. “But it was fun,” she adds. “It was harder than I thought it would be.”

Despite the fact that Rihanna has sold over 30 million albums since Jay-Z signed her to Def Jam in 2005, it seems like she has had her challenges. She had a very public and tumultuous relationship with singer Chris Brown, and the paparazzi stalk her constantly, trying to get a snap of her chameleon hair—today, black and
buzzed down one side—or her adventurous outfits.

“Are you a misfit?” I ask her. She cocks her head. “Hmm, what do you think?” I genuinely don’t know. I saw the performer stalk around the stage like a panther at the Toronto stop of her private (and wild) 777 concert tour in November 2012, hurling good-natured profanity, and now I’m faced with this soft-spoken girl.

She doesn’t seem to know how to answer the question either. “I think I embraced the person I am after I understood that I’m not going to find somebody else in the world who’s going to think exactly like me and agree with everything I think and live the way I want to live,” she explains. She only hooked that kind of equanimity four years ago though, she says. (It was roughly around when her relationship with Chris Brown imploded for the first time, but I don’t say as much.) “You just come to a place where you want to actually
live,” she continues. “You don’t want to just exist; you want to have fun, you want to be free and you want to know that you did it the way you wanted. Years from now, you can look back at memories and things that made you happy—that’s what’s important.”

Though Rihanna
moved to NYC when she was 16, trying to lock down a record deal, she reportedly just bought a sprawling home next to the hotel we’re in now, neighbouring one of Simon Cowell’s mansions. She’s often working to combine her roots with her new larger-than-life existence. In fact, her manager, Jay Brown, is outside making hushed phone calls about upcoming video shoots and her mom, Monica, is sitting in the other room. “What I’m really scared of is not being in control,” she explains. I’m about to ask about her reputation for late shows and later nights, when she seems to anticipate my question. “That’s why I can’t get too drunk; I can’t do anything that takes charge of me,” she says. “That’s what I want for young women: to be in control of themselves and be in control of their lives. It’s so easy for people to be…” She trails off, trying to find the right word. “I don’t want to say submissive, but weak-minded…. I want to encourage them, especially when it comes to protecting themselves.”

She holds her hands in her lap, earnest for a moment. Sex is what she wants to talk about, not crazy concert rumours or her
Instagram feed. “The AIDS epidemic has been around for as long as I have been alive, which really puts it into perspective,” she explains. “Roughly half of the new infections are in people 24 years old or younger, with the majority being female.” Rihanna is hoping to use the platform she has built on sexy lyrics like “Boy, can you get it up?” to remove the stigma around sex and, hopefully, encourage girls to protect themselves.

It’s clear that the Caribbean rate of AIDS infections, the second-highest outside of sub-Saharan Africa, unsettles her. She just donated $1.75 million to a Bajan hospital. She has become something of a monarch on the small island of Barbados—a position that, historically, comes with equal parts veneration and venom. On my way into town from the airport, the cab driver, like some sort of volunteer star tracker, let me know that Rihanna was at her brother’s club. When I was sitting on the beach that morning, a man shilling snorkelling tours started his sales pitch with “So, you like RiRi?” before rolling his eyes. Much like “aloha” to Hawaiians, Rihanna’s name seems to mean everything in this place. “Even though sometimes they might come off as a little aggressive or a little snappy about certain decisions I make, that’s just the way people are in Barbados. I understand it—I’m one of them, so it doesn’t matter; I love them,” she says with a smile. “They love me too, even if they don’t say it.”

She’s trying to shut out other people’s opinions about her life anyway. “I never want to lose myself,” she says quietly. “It’s really easy to get pulled in lots of different directions, and I never want to get pulled so far deep that I can’t come out. There are things that happen in your life that you can’t control, but I want to control as much as possible.” I wonder how she maintains any kind of
command over a life that is both more scheduled and frantic than Grand Central station. She talks easily about idle pastimes like painting and cooking, dismissing the fact that she practically never has time to indulge in them by explaining that they’re still “fun.” She seems to punctuate her thoughts that way: by throwing out “it’s fun” and flashing a smile. Perhaps a reminder that, despite the ever-tightening vice of galactic fame, she’s still young and beautiful and having the time of her life. But is she happy? “Yes!” she shouts, a mischievous smile on her face. “I can’t complain! If I complain, God would slap me in my face right now.”

Katy Perry on fame and fun

Jennifer Lawrence on acting and Hollywood