Rebecca Hall—Iron Man 3 star and our fave Brit cool girl—opens up about film, family and her first blockbuster. 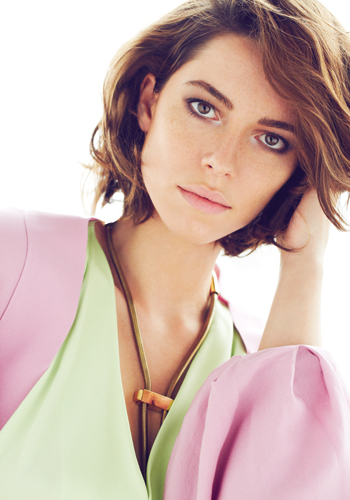 Rebecca Hall is striking. I don’t just mean that, at five feet 10 inches, she towers over me, even when she’s wearing her sensible flat boots. And I’m not just referring to her tawny cheeks, which are dotted with a kaleidoscope of freckles. I mean that the British actress’ wit is totally arresting. Favoured by boldface directors like Ben Affleck (who co-starred with her in The Town) and Woody Allen (who cast her as a prudish foil to Scarlett Johansson’s sexpot in Vicky Cristina Barcelona), Hall kicked back easily on-set for our cover shoot, chatting casually about everything from documentary films to feminism.

Her appealing cleverness shouldn’t come as much of a shock: She attended Cambridge University and is the daughter of legendary stage director Peter Hall. What might come as a surprise is that, in May, she’s starring in mega-flick Iron Man 3 as Maya Hansen—an old friend to Tony Stark (played by Robert Downey Jr.). “If you are very curious about life and overstimulated and have a desire to constantly educate yourself and learn new things, acting fulfills that,” says Hall of what drew her to the big screen in the first place. So we sat down with the curious 31-year-old to chat about taking her bright career to the next level.

ELLE Canada: Though your father founded the Royal Shakespeare Company, I heard that you were actually more inspired by your mother, Maria Ewing, who is an opera singer.

Rebecca Hall: Watching her was very influential. She’s a great singer, but her genius is that she was also a great actress. I understood from watching her what it’s like to live a very passionate life. I grew up watching her sing Salome, and it was truly frightening how abandoned she was to the character. She was breathtaking. And I’m not just saying that because she’s my mom.

EC: Did that inform how you feel onstage?

RH: Anything that doesn’t smack of truth is really embarrassing for me. My mom gave me that.

RH: It’s funny, but I’d rather be exposed than phony.

EC: You left Cambridge University before finishing. It almost seems like you want things to be tough.

RH: I don’t know if I like them to be hard, but I don’t see the fun in everything being easy.

EC: This is turning into therapy.

EC: Iron Man 3 is a complete departure from what you’ve done in the past. Was the shift exciting?

RH: I’m not immune to that just because I’ve done a bunch of art-house films. I am completely star-struck by big Hollywood glamour and the machinery of it. I’ve done studio movies before, but green screen, the effects…it’s a whole other scale, and you can’t help but be infected by the excitement.

EC: What was fun about it?

RH: It wasn’t the stuff I’ve just described [laughs]; it was the opportunity to act with Downey and [Gwyneth] Paltrow. They’re very witty and good sparring partners.

EC: Do you think this kind of blockbuster will take your fame to the next level?

RH: [Laughs] This question has come up before practically every film I’ve done. People around me seem to think my career is a video game with so many levels. But I don’t—I’m carrying on my life exactly the same. I think celebrity and fame are only apparent to everyone looking at you.

CAREER ADVICE: The dangers of being too ambitious

EC: Do you watch your films?

RH: I usually end up watching them, but I don’t know that it’s entirely sensible.

EC: Because it’s tough to see yourself onscreen?

RH: Well, there’s an element of ‘What could I do different next time?’ but I’d rather carry on from a position of naïveté. If I get to know too much about what looks good and what doesn’t, I’m not really allowing room for the happy accidents—the clumsiness that looks real—and I also run the risk of looking self-conscious. I think that that is death for an actor.

EC: You’ve recently done a miniseries, an indie and a blockbuster. What’s driving you right now?

RH: I’m beginning to realize that I am drawn to characters I’m unsure about—that the ones I don’t relate to are the ones that really pull me. Something that interests me is the difference between introverted and extroverted characters.

EC: I just read a book about that: Quiet by Susan Cain.

RH: Me too! Ironically, turns out I’m 100-percent introverted. The book makes a fascinating point that we’re now living in an age that puts emphasis on being flashy and showy. Most people would say I’m an extrovert, but I can’t do it all the time without burning out. I need to have a minute in the corner by myself sometimes.

Relationship: The surprising power of the INTROVERT

EC: Speaking of needs, why do you do so much research for a part?

RH: After a certain point, I’m aware that it doesn’t make any difference, but I’m very studious. You were asking me about the influence of my mom and my dad: My dad is a director who is very analytical and very thoughtful. My mother is a performer who is a hundred percent intuitive. I’d like to think that I’m a good combination of the two.

EC: So what do you do for fun?

RH: I’m the type of person who loves to stay in and read a book. I’m also the person who likes to play music very loudly, have a party and DJ and dance.

RH: A little bit. Only for my mates. Quietly. [Laughs] I used to spend quite a bit of time making playlists, but it’s usually a very eclectic mix, like New Orleans jazz to old-school soul and R&B. I also love roller coasters. I don’t know why I thought of that. I just rode one at EuroDisney!

EC: Do you sit in the front?

RH: Yes, although the back is better apparently. A man told me during my last ride. I’d also love to go skydiving. I’d be scared as hell, but that’s part of the fun.

EC: Is working with your dad scary? He has directed you a fair bit.

RH: It was always great. He’s brilliant, and I have such respect for his constant belief in the value of art. And he’s my dad, so that’s a real bonus. [Gets up to pull on her asymmetrical black sweater]

EC: Where were we?

RH: I was shivering like some neurotic mess trying to answer questions about my father. [Laughs]

EC: And we were about to talk about nepotism. Is that something you consider when you work with your father?

RH: It got to the point where I just thought ‘Do I really care?’ People are always going to say ‘Oh, she’s only doing well because of her father.’ Well, yeah, to a certain extent. But people’s preconceptions weren’t going to stop me from doing it. I think I’ve been quite lucky. I might as well face those demons.

EC: Do you feel lucky to have worked with Woody Allen?

RH: It was like someone was playing a joke on me. I grew up watching his movies; I know everyone did, but I really feel that a lot of my formative years were informed by Woody Allen films. I was a sort of New York intellectual when I was 16. I wanted to dress like Annie Hall when I was 18. It was such a big part of my life that when it came time to actually work with him, it felt like a joke. He trusted me to improvise. He was always saying ‘Put it in your own words’ and I’d be like ‘You’re Woody Allen. I’m really not going to improve on your dialogue. I’ll say what you’ve written, you fool!’

EC: That’s what put you in the spotlight. Then it became public that you were dating director Sam Mendes after he split with Kate Winslet and the British tabloids went crazy. Do they have a right to know about your life?

RH: I don’t think they have a right to know anything; I’d rather be mysterious. There’s another sort of rational side of me that sees the argument that I am in the public eye, but I don’t entirely buy that. I think I have a job, which is to present a character in a story and entertain you and divert you with my work—that’s it.

EC: Some nasty things were said.

RH: It’s alarming. I’m a very private person. I barely tell my friends what’s going on half the time, so the idea that I should then talk to the world about what is going on seems anathema to me. People can say what they want. I’m not going to change anyone’s mind.