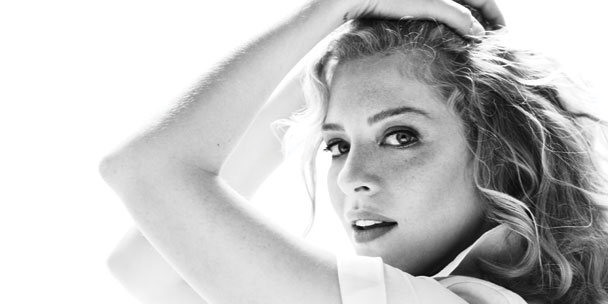 Although she’s best known for her dark role in the first two Twilight movies, Rachelle Lefevre isn’t a scream queen. The actress has played an astonishing range of roles since being discovered by a television producer while working at a sushi bar in her native Montreal. Lefevre has taken on comedies (How I Met Your Mother), dramas (Barney’s Version) and action flicks (this summer’s White House Down, co-starring Channing Tatum).

Canadian celebrities: SHAY MITCHELL on her rise to fame

Still, the fact that Lefevre answers the phone with a big knife in her hand seems very Jamie Lee Curtis in Halloween. “I’m cutting up some fresh watermelon right now,” she explains over the line from North Carolina, where she’s currently filming. “I do most of my interviews in my kitchen. Yesterday, I was on the line with The New York Times and I accidentally burned some chocolate.” When I suggest this sounds a little like name-dropping, Lefevre laughs. “The article wasn’t really about me,” she says. “It was about Stephen King. But that’s a pretty solid name to drop.”

Lefevre’s new CBS miniseries, Under the Dome, comes bearing the Master of Horror’s bloody imprimatur. It’s an adaptation of King’s bestselling 2009 novel about a small Maine town whose residents become mysteriously trapped beneath a giant transparent and impenetrable bubble of unknown origin—a life-sized terrarium whose inhabitants quickly begin taking out their claustrophobia on one another. Critics said that the book was one of King’s best since his heyday in the 1980s—which also happens to be when Lefevre discovered his work. As a little girl, she used to eye the thrillers lining her mother’s bookshelves, trying to psych herself up to open the freakily illustrated hardcovers.

SLIDESHOW: Celebrities and their ZODIAC SIGNS (Rachelle is an Aquarius)

“I was in elementary school then, so I was too young,” says Lefevre. “I remember reading V. C. Andrews’ Flowers in the Attic in high school. I liked anything scary or sexually salacious—I was interested in things that were sort of scandalous and fun.” While she’s still an avid reader, Lefevre doesn’t try to shock herself anymore. “At this point, I’ve kind of read it all. Or worse,” she says with a laugh, “I’ve had life experiences along those lines.”

Lefevre does admit to having a weakness for a certain kind of scary movie, however. While she can’t stomach violence, she likes stories that combine the supernatural with psychological complexity. “I was excited to be part of a vampire franchise because I like exploring the dark corners of humanity,” she says, which might explain why her red-haired villainess, Victoria, was the only character with any bite in New Moon. “I think that horror is a safe way to explore the things we don’t understand about our own nature.” She’ll only spend so long giving herself the creeps, though. “I mean, I’d love to sit and drink a bottle of wine and talk about darkness, but I’m pretty giddy and gregarious,” she says. “I like walking my dog or just sitting in the kitchen. And I have a lot of guilty pleasures.”

Under the Dome, which is pulpy and propulsive right from the get-go, could also be described as a guilty pleasure. Lefevre plays Julia, an investigative reporter who moves to the sleepy community of Chester’s Mill only a few months before the dome’s descent; in the pilot episode, she’s a cautious, caustic presence, while everybody else is losing their heads. “She’s an outsider,” explains Lefevre. “She doesn’t fit in. She’s stuck in a place in which she never expected to stay. The longer the dome stays up, the less likely it seems it’s going to go away. She realizes that she’s a member of the town, just like everybody else. As the series goes on, she sort of puts down her camera, drops her journalistic tendencies and adopts a more residential outlook.”

This notion of identifying with an adopted home resonates very strongly with Lefevre. Travelling is one of her great passions. “I don’t like the experience of being a tourist, though; I like to stay away from those traps,” she explains, citing a recent trip to Croatia as an example of her off-the-grid adventures. Although Lefevre’s parents didn’t have a lot of money while she was growing up, she says they insisted on travelling so that their daughter could be exposed to different locations and cultures; she fondly recalls a trip to England with her father to see theatre productions in London. “The value of those experiences was a major priority in my house,” she says. “There’s a great quote about travelling: ‘There are places one comes home to where one has never been before.’”

At the same time, Lefevre admits that a big part of her heart is back in Montreal. If she had to be trapped under a dome anyplace in the world, it would be her hometown. And not only because she still has family there. “I’m a foodie,” she says. “And for me, it’s like the food capital of Canada.” In fact, one of her proudest moments came when the legendary greasy-spoon diner Beautys—a carb-loaded Montreal brunch staple since 1942—reached out with a request. The owners, Hymie and Larry, wanted an autographed picture to put up on the wall. “That was the moment when I thought ‘Oh, my God, I made it,’” she says with a sigh. “I grew up eating there, looking at all the photos of the famous people. I almost cried. It felt like a big deal.”