Outspoken, funny and ambitious, Moore is taking on the most exciting roles of her career. 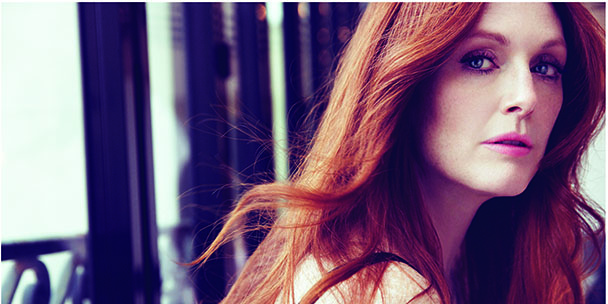 I dare you to spend a few minutes wth Julianne Moore and not be dazzled. I know that sounds like the kind of obnoxious hyperbole reserved for breathless fangirls, but Moore, 53, radiates a crackling enthusiasm that is perfectly infectious. She is curious, frank and happy to laugh at her own jokes. The fiery-haired actress ruled the Toronto Film Festival, scoring major award season buzz for her lead in the upcoming drama Still Alice and for portraying a tortured actress in last fall’s Maps to the Stars. While Moore was in Toronto, we sat down to talk about everything from her role as L’Oreal Paris ambassador to her obsession with flats to how we grapple with aging.

You have killer style, but I heard that you have argued about fashion with your friend Tom Ford. True?

[Laughs] “He hates a Birkenstock, and I love a Birkenstock. He would just be like ‘Oh, I can’t look at those shoes.’ I even have two pairs of the rarest-of-the-rare all-black Birkenstocks—with black soles and straps. Tom thinks people should always wear a heel. I love a beautiful shoe, but I can’t wear them all day long—I can’t move around in them as quickly as I would like to. The trick, I suppose, is to find a way to look interesting and stylish as you go about your daily life. It’s a tough thing to do.”

As a redhead, you must always have to deal with standing out and, by default, being the “interesting-looking” one.

“It’s really funny because I was trying something on in a store that I like to go to in Long Island and said, ‘I think this is really cool, but I’m afraid that people are going to look at me when I wear it.’ [Laughs] I don’t want to attract attention to myself. Having red hair is attention enough! That’s why style is a tricky kind of thing: I want to look beautiful, but I don’t want to stand out.”

Now, in Still Alice, you play a professor who is diagnosed with early-onset Alzheimer’s. It’s a powerful, painful story. What drew you to it?

“It’s fascinating because it’s a depiction of somebody losing her life right smack in the middle of it: She’s 50. What’s interesting is that it is so much about our refusal to look at our mortality. As we all say: None of us gets out of here alive; it’s just a matter of when and how. In this case, this is a woman who is forced to confront the end of her life and what that means. Do you define yourself by your intellect? By your relationships? What is your relationship to your work? To your family? It’s an exploration of what it is to be a human being and mortal. It’s very interesting.”

Especially in our society, where people associate youth and vigour with intelligence and value.

“At one point, somebody was talking to me about an Alzheimer’s patient ‘spacing out,’ and I got really upset because that’s not what I observed. I did a ton of research with people who were recently diagnosed and people who were in long-term care. I didn’t see anyone spacing out. What I saw was people trying really hard to make the cognitive connections they needed to perform a task.”

Do you think that people make assumptions about you because you’re an actress?

“I think we always make assumptions. Our brains are always a few steps ahead of us saying ‘This is what I’m going to prepare you for’ and then the reality of something usually disassembles that. I think the biggest assumption people usually make about me is that I’m going to be very serious.” [Laughs]

You don’t strike me as the solemn type.

“I’m not terribly serious when I’m working. I mean, I’m serious about my work, but I like to talk a lot. I make a lot of jokes. I like things to be loose.”

That sounds like the opposite of your recent diva character in David Cronenberg’s Maps to the Stars.

“She’s awful. What I enjoyed about that character is the fact that she is tyrannical and childlike all at the same time. I think about the scene in the bathroom, where she’s on the toilet [and pees while Mia Wasikowska is in the room]. It’s so awful, but you could look at it two different ways: It’s a power play to force somebody into something that’s physically uncomfortable for them. But children invite you into the bathroom all the time because they have no boundaries—they’re so enmeshed with you. That’s what I love about that scene: You don’t know if she’s being a tyrant or if she’s that porous. She’s both, which makes her kind of fascinating and tragic.”

You’ve been very vocal in the past about taking a stance against plastic surgery. Is that a difficult position to take in your industry?

“Aging is going to happen whether we like it or not. I remember working with a makeup artist once who was my age and works a lot with fashion models, which means she works a lot with teenagers. She was like ‘Oh, my God, I have to do this and this’ and I was like ‘It’s not you! You just can’t stand behind 15-year-olds all day long and compare your face to theirs. It’s supposed to be different.’”