Helena Bonham Carter relishes a walk on the cinematic dark side. Why being wicked never felt so good! 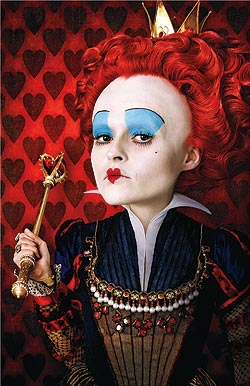 Helena Bonham Carter was once known as the “corset queen” of British cinema for her roles in period dramas such as
A Room With a View (1985) and
The Wings of the Dove (1997). Today, the 43-year-old actress is busy exploring femininity’s darker side, from the all-singing, all-murderous Mrs. Lovett in
Sweeney Todd: The Demon Barber of Fleet Street (2007) to a recurring role as the Lord Voldemort-worshipping witch Bellatrix Lestrange in the Harry Potter films. But there’s bad and then there’s the Red Queen, her character in Tim Burton’s latest fantasy extravaganza,
Alice in Wonderland.

Reigning over Wonderland with an iron fist, the Red Queen is hell-bent on killing Alice, the girl who stumbles into her domain after falling through the rabbit hole. The Queen’s head is grotesquely big, and her catchphrase is a dictatorial “Off with their heads!”

“I gravitate to baddies now,” admits Bonham Carter in a phone interview from her home in London, England, where she lives with Burton and their two children, Billy Ray, 6, and Nell, 2. “I’m over the romantic characters — I’m too old for them,” she says. “Now I get to play the baddies — the character parts. I love playing damaged people. There is a fascination with them: ‘How on earth did you get to be like that?’

A self-described “intellectualizer,” Bonham Carter drafted a psychological profile for the Red Queen before playing her. “At the heart of every bully, there’s someone who is quite vulnerable and terrified — someone who has been rejected or fears rejection,” she says. “The Red Queen probably had a terrible childhood, and now she’s punishing everybody else for her deformity.”

Read about Banham Carter’s relationship with Johnny Dep on the next page …
12 romantic hours in Manhattan
Date lines: Liane Balaban is on the rise
Hot 100: Trends for 2010

Burton’s film maintains many elements of the original Victorian tales by Lewis Carroll but reinvents them for the 21st century. Alice (Mia Wasikowska) is 19 when she is reunited with the Wonderland characters she first met as a little girl: the White Rabbit, Tweedledee and Tweedledum, the Cheshire Cat, the White Queen and, of course, the Mad Hatter, as played by Johnny Depp, Burton’s other screen muse. “It’s always good to have Johnny around because, on the whole, Tim is less irritated by Johnny than he is by me,” says Bonham Carter. “He knows what Tim wants. When I have an idea, I use Johnny as, ahem, what’s the word?” Buffer? “Yes, he’s my buffer, my ambassador.”

Bonham Carter says that she and
People’s perennial Sexiest Man Alive enjoy disguising themselves and looking unrecognizable in their roles, adding that they share a love for characters with the Peter Pan complex. “I’m drawn to characters who are quite infantile and arrested in their development,” she says. “I have a part of me that’s quite arrested. And that’s definitely the case with Tim. I think that’s why we see eye to eye on many things.”

Burton’s arrested development is for analysts who enjoy a challenge, but Bonham Carter’s is more understandable: When she was 13, her father suffered a stroke that left him paralyzed. As her mother was forced to return to work and her two older brothers were off at college, Bonham Carter became his primary caretaker. In 1985, her plans to go to the University of Cambridge were derailed when director Trevor Nunn cast her in the title role in
Lady Jane, her breakthrough film. She had barely finished shooting when director James Ivory hand-picked her for
A Room With a View, in which she played Lucy, a young English woman who has to choose between her head and her heart — or, in screen terms, Daniel Day-Lewis or Julian Sands.

Bonham Carter went on to star opposite a string of Hollywood’s most dashing men: Brad Pitt in
Fight Club, Mel Gibson in
Hamlet and Aaron Eckhart in
Conversations With Other Women among them. Her latest dashing costar is Colin Firth in
The King’s Speech, which will be released later this year. Bonham Carter plays Queen Elizabeth (the Queen Mother) to Firth’s King George VI, who learns to overcome his stammer as he takes over the British throne after the abdication of his brother Edward. Was this a deliberate decision to return to her more genteel acting days by playing a dutiful and loving queen? “As an actor, I’m usually just lucky to be offered jobs,” she says. “There are no grand plans. If only I had so much power….” At least she can count on landing the next Burton film, right? Hardly, she says. “I never know what’s going on in his head!”