So touching! But really. 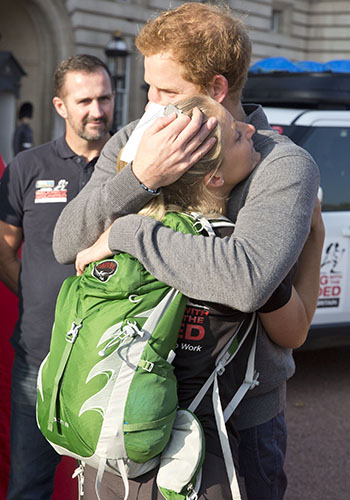 Here’s the story behind the hug, according to PEOPLE: You’ll recall that earlier this month, Harry joined a group of army veterans trekking the length of England in support of a favourite charity of the prince’s, Walking with the Wounded.

They’ve just finished up their epic journey, and the prince was there to greet them at the finish line. One of the walkers, a 24 year-old soldier who had been injured in Afghanistan (and is actually due to have her leg amputated following this endeavour), had been placing the dog tags of some her fallen comrades in spots along the way. She had planned on leaving the final one at Buckingham Palace, but got so overwhelmed when she saw Harry, she just wanted to give it to him.

Harry, looking equally as overwhelmed, didn’t want to accept it, but the US Marine (Kirstie Ellis) insisted, saying he knew how much it meant to her.

Cue the hug, the breaking of all royal protocol and another gold star next to everybody’s favourite bearded royal.