Prince Harry opens up about losing his mom

While opening a home for AIDS orphans in Lesotho. #toomuch 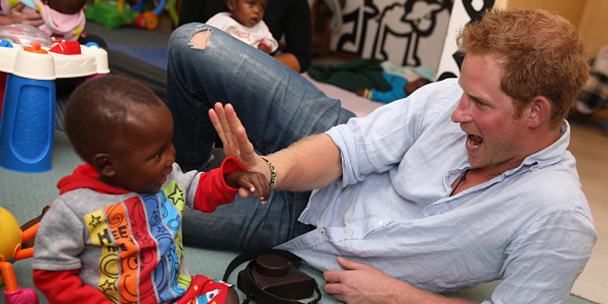 Tissues at the ready, boys and girls: Prince Harry just hit us with a one-two-three punch of sniffle-inducing loveliness.

First, he was in Africa for the opening of a centre for kids impacted by the death of their parents, mainly to AIDs, made possible by his charity Sentebale. Oh, and did we mention he named one of the buildings after his mother…and the other after his beloved former nanny, Olga?

As if that weren’t gorgeous enough, Harry made a few remarks at the opening, in which he spoke quite candidly about his first trip to Lesotho many years ago, and the: “overwhelming connection to many of the children I met. They were far younger than me, and of course, their situation was a great deal more challenging than my own. Nonetheless, we shared a similar feeling of loss, having a loved one, in my case a parent, snatched away so suddenly.”

Harry, who lost his mother Princess Di when he was barely a tween, shared that he understood the “gaping loss” these orphaned children would experience, while adding that in their case, that loss often meant they were left to care for the rest of their families at the age 8 or 9.

The day finished with one more reason to heart the ginger prince. Talking about why he founded this charity in 2006 (fun fact: in partnership with a prince of the African country of Lesotho) he said: If we were born of privilege we should pay back to society in some way or another and this is why we started this project.”