Celeb-obsessed or just planning your big day? Take ELLE's quiz and see how tuned in -- or out -- you are! 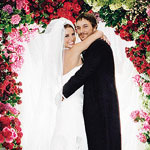 1) Which celebrity proffered his bride a prenup just hours before the wedding?

2) Who wore a black gown to her wedding?

3) Who had the most engagements that didn’t turn into actual marriages?

4) Which star sang at their own wedding reception?

5) Who had the shortest marriage?

6) Whose beach-side wedding was brought indoors due to a hurricane?

7) Which couple invited guests to a party that turned into their wedding?

8) Who missed his own wedding rehearsal dinner?

9) Which couple had valets at their wedding hang air fresheners with their picture on them in all the guests’ cars?

10) Who planned the most elaborate fake wedding to throw off the paparazzi?

a. Ben Affleck and Jennifer Lopez
b. Brooke Shields and Chris Henchy
c. Britney Spears and Kevin Federline11) Which couple included a dog in their wedding party?

12) Who had their surprise wedding at a rock concert?

13) Which couple auctioned off their wedding attire and gave the proceeds to charity?

14) Which star designed his and her rings for their wedding?

15) Which couple have “A deal’s a deal” engraved inside their wedding bands?

16) Which celebrity wedding was so hush-hush that not even family members attended?

17) Which celebrity sang Britney Spears’ song Oops!…I Did It Again at her wedding reception?

18) Which couple asked guests to wear something “hot and sexy” to their wedding ceremony?

Here are the results! Find out how in-the-know you are with Tinsletown nuptials!

1)
A. Mick Jagger decided to draw up a prenup with Bianca Perez just hours before the wedding. “It was,” she later said, “a bad way to start a marriage.”

2)
A. Sarah Jessica Parker chose a simple black dress with a full skirt for her New York wedding to Matthew Broderick.

3)
B. Julia Roberts was engaged to Dylan McDermott and Kiefer Sutherland but both relationships ended before the marriage took place.

4)
C. Adam Sandler became a real-life wedding singer as he serenaded his bride with a song at their wedding reception.

5)
C. Zsa Zsa Gabor and Felipe de Alba had the shortest celebrity marriage — it was annulled after just one day!

6)
B. Sarah Michelle Gellar and Freddie Prinze Jr. would have loved to have their wedding on the beach in Mexico, but they had to relocate to a villa because of Hurricane Hernan.

7)
A. Julia Roberts and Danny Moder invited family and friends to “Come celebrate Independence Day!” and at midnight surprised everyone with a wedding ceremony.

8)
A. David Gest missed his own rehearsal dinner — no wonder the marriage didn’t last!

9)
B. John Stamos and Rebecca Romijn created air freshener favours featuring a ’70s-style photo of themselves and the words “Our love will last forever.”

10)
B. Brooke Shields and Chris Henchy had a fake wedding a month before they got hitched with fake invites and mannequins as guests.

11)
C. Gavin Rossdale and Gwen Stefani are so fond of their Hungarian sheepdog, Winston, that the dreadlocked pooch escorted them down the aisle.

12)
A. Mia Tyler wed David Buckner in a surprise ceremony onstage at an Aerosmith concert.

13)
B. Sting and Trudie Styler offered their wedding attire up to the highest bidder at a charity auction. The proceeds went to The Rainforest Foundation, which the couple founded in 1989.

15)
B. Courtney Cox and David Arquette chose this expression because it was used by a friend’s father, whose marriage Courtney admired.

16)
B. Chris Martin and Gwyneth Paltrow’s wedding was so secret that family and friends didn’t even know about the ceremony.

17)
B. Debra Messing and Sean Hayes had a great time performing the song for wedding guests because they had already learned the words for Will & Grace.

18)
B. Dave Navarro and Carmen Electra’s wedding invitation included a photo of them lying nude on autopsy tables and asked guests to dress “hot and sexy.”

What this says about you!

13-18 correct answers
You’re either a star stalker or obsessed with getting hitched. Either way, you’re avoiding the real world by holing up with your wedding mags. You need to stop living vicariously through others. Don’t let life pass you by. Switch off The Wedding Planner and go get yourself your own man!

7-12 correct answers
You’re a casual trend watcher. You browse the mags while waiting in line at the drugstore and catch up on celebrity news while working out on the treadmill. You’re probably attached, but in no rush to get married. When you do decide to get hitched, you’ll be perfectly prepared.

0-6 correct answers
You’re seriously tuned out! You’re spending all your time on work and family and missing the juiciest celebrity gossip. Go book yourself a pedicure! You’re due for a little me time — and there’s nothing’s more relaxing than reading the gossip rags while getting pampered.