Paris Hilton's iPod: What is she listening to?

From princess to wannabe pop star, is Paris Hilton ready for her debut? 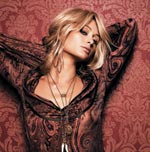 When you encounter Paris Hilton, certain things are just as you’d expect: the five-foot-eight frame is tanned and taut, the blond hair extensions are long and shimmering, the white sunglasses are oversized and the turquoise eyeshadow is liberally applied. But behind the artifice, there is something quite surprising: an artist who wants to be taken seriously — a woman who, until now, has never worked so hard at anything in her life, not even when she spent several hours slinging fries at a fast-food joint on her reality-TV show The Simple Life.

The recording of Paris, her debut album for Warner Bros. Records, was a labour of self-love. In fact, Hilton had to overcome crippling performance anxiety — “No one believes it, but I am shy,” she says, looking down and batting her false eyelashes — and slave away for months in a Miami studio until 4 a.m. in sweatpants, a testament to her dedication. “It was a lot of work, but it totally paid off because it’s something that I’m so proud of.”

The resulting album is a genre-hopping collection of songs that slink from reggae-lite to hip hop. On “Jealousy,” which may or may not be about a former size-0 friend, Hilton snarls: “I was always happy / When I was watching you become a star / But you were only happy / When the world was openin’ up the scars.” But on the summertime single “Stars Are Blind,” her voice is as airy and sweet as candy floss and affects a Gwen Stefani-like coo on the chorus: “I can make you nice and naughty / Be the devil and angel too / Got a heart and soul and body / Let’s see what this love can doo-oo.” In the accompanying video, a bikini-clad Hilton wriggles in the sand and surf with a buff male companion.

The message behind Hilton’s music? Female empowerment. “I know people might think the lyrics are a little conceited,” she admits, “but they’re just about woman power. I love singing songs with cool lyrics like that.” And it was the lyrics, more than anything, that Hilton poured her heart and soul into. “It was easier for me to record songs that I wrote because it felt like it was more me,” she says emphatically. So, just how many of the album’s songs did she pen herself? “‘Jealousy,’ ‘Turn You On,’ ‘Turn It Up,’ ‘Fightin’ Over Me’…what else?” she giggles self-consciously. “There are so many songs on my album … like, more than five or six. Yeah, and, um, I can’t think.”

For more celeb action, check out our interview with Avril Lavigne!Her foggy memory can be forgiven, of course, since this business of releasing an album is exhausting. Besides, Hilton has been busy auditioning dancers in L.A. for her upcoming live tour, which she hopes will silence the naysayers, and learning choreography at daily rehearsals. It is, as she points out again, a lot of work. But it will all be worth it if the public just gives her music a chance. “If anyone says anything bad, it’s just because they don’t know me and are judging me for other things,” she says, nodding confidently. “Because if it were anyone else recording the same songs, they’d love them.”

When Paris Hilton’s cellphone was hacked back in February 2005, the world got a glimpse of her exclusive, celeb-filled address book. Now, ELLE scrolls through her iPod to reveal whose tunes the heiress turned recording artist has on heavy rotation.

The classic karaoke pick:
“I always do ‘Bette Davis Eyes,’ by Kim Carnes. I love that song.”

The dance-floor anthems:
“‘Hung Up’ by Madonna, ‘My Humps’ by The Black Eyed Peas and ‘I’m a Slave 4 U’ by Britney Spears.”

The songs of her youth:
“All the music I grew up to, like Prince, Paula Abdul and, like, New Kids on the Block.”