EXCLUSIVE: Our full interview with May Cover Star Priyanka Chopra

I’m on a ‘find myself’ sort of journey.” 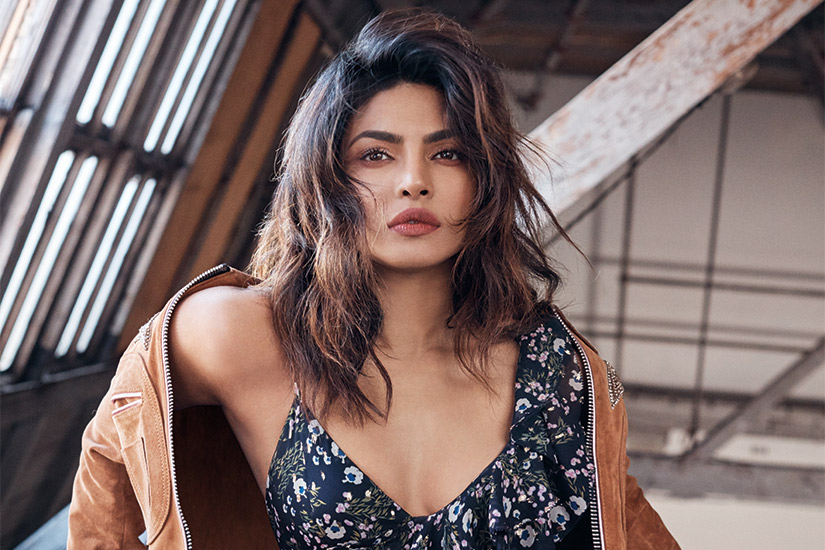 You can tell a lot about a person by how they behave in front of a mirror. What’s most revealing is not the primping and posing that one does out of habit but the subtle moments beyond that: whether they confidently hold their own gaze or assess themselves critically and how long it takes before they turn their attention to their phone, the window or anything other than their own face staring back at them.

In the case of Priyanka Chopra—on the set of our cover shoot, at least—the interaction with her mirror self is all business. Taking in the hairstylist’s work with an analytical eye, the former beauty queen (she was the winner of Miss World 2000) asks for her curls to be more undone. Likewise, she pauses mid-interview to give her brow requests—a little lighter, “really symmetrical”—to our makeup artist.

If Chopra’s self-gaze seems meticulous, she takes in the rest of the world with a similar precision and confidence. As soon as the ELLE Canada team meets her in a sunny Brooklyn studio, she’s immediately “on,” ready to discuss the wardrobe pull and marry her own creative vision with ours. Riffing off our starting point (theme: surfer girl goes to St. Moritz), Chopra doesn’t hesitate to add her own spin (sexy, dishevelled bedroom hair) to the concept.

All of this may make Chopra sound like a hard-to-please perfectionist, but that couldn’t be further from the actress/producer/activist’s personality. When we’re in her orbit, she is firm but respectful, collaborative rather than demanding and deeply warm, laughing loudly and often. This is a woman who has been there, done that and knows what she wants. At 35, she has racked up more than 50 feature films in her native India’s Bollywood industry and has a growing resumé of projects stateside, like last summer’s Baywatch and this year’s Sundance darling A Kid Like Jake. She also has 21 million Instagram followers, a music career (including singles with Will.I.Am and Pitbull) and a Pantene ambassadorship. That she is this sharp-eyed on-set after a late night of shooting for the third season of her hit TV show, Quantico, and will go on to yet another photo shoot after ours says something about her tireless ambition, which Chopra owns unabashedly.

“I fly at the speed of light all the time!” she says in between pumps of curling her eyelashes. “Sleep and I are not friends because there’s just so much I want to see and experience. I’m like a kid in a candy shop with this thing called life. I’ve been in this business for 18 years now, and you reach a point where you know what you’re doing. I don’t want that. I want to refine myself artistically and find my new creative voice, my evolved voice. I’m on a quest to do that, whether it’s as a producer, a writer, an actor or a musician. I’m on a ‘find myself’ sort of journey.”

YOU SEEM REALLY HAPPY RIGHT NOW. “There’s just a spring in my step for some reason! I’m fascinated by everything around me. The world feels sparkly and magical. I’m excited to walk on [Quantico’s] set. I like the people in my life. I love the apartment I’m in…. It’s just the feeling of being in a place where life’s good.”

WHEN EVERYTHING IS GOING SO WELL, DO YOU WORRY IT WON’T LAST? “In my 20s, I was totally like that. Like, gasp, something is gonna go down. My 30s made me realize everything doesn’t always go to shit. My mentor in America, [music producer] Jimmy Iovine, has this saying: ‘When the shit gets bigger than the cat, you get rid of the cat.’ It’s my life mantra.”

WAIT, WHAT DOES THAT MEAN? “Basically, you have to find a reason for the shit and get rid of the reason. Get rid of the freaking cat!”

WHAT “CATS” HAVE YOU GOTTEN RID OF LATELY? “Clutter. Those cats can be in your head, like finding reasons to worry. It is what it is. What will be will be. That doesn’t mean I’m someone who sits on her hands and isn’t motivated to change her circumstances for the better. I love being successful, but at the same time, life happens. The best way to navigate that is to just be right now, and if everything is all right, let it be all right.”

YOU LOST YOUR FATHER RECENTLY. IS THIS NEW ATTITUDE A RESULT OF EXPERIENCING A WORST-CASE SCENARIO AND REALIZING YOU’RE STILL SOMEHOW OKAY? “Probably? That’s what the books would say. Life is like a series of waves, right? Good, bad, valley, pause. It is a bit like coming up out of the water of an extremely tough phase and just breathing for a second because you know you’ll go under again at any moment. My life is like a roller coaster on every level.”

HOW DO YOU KEEP YOUR CAREER INTERESTING? AFTER SO MANY PROJECTS, THERE MUST BE A TEMPTATION TO PHONE IT IN. “What’s the population of the world? Approximately 7.3 billion people? [Last year, the UN said 7.6 billion people, so she’s close!] Imagine how many characters that gives me to play. I like to look outside at life itself and find new things to move me.”

YOU’RE ONE OF INDIA’S BIGGEST STARS, AND PROJECTS LIKE BAYWATCH AND QUANTICO HAVE RAISED YOUR PROFILE HERE. IS IT GETTING HARDER AND HARDER TO JUST GO OUT AND WATCH THE WORLD GO BY? “I’ve been in the public eye for more than half of my life. This is my normal. If I go out and people don’t know me, I’m like ‘Is something wrong?’ [Laughs] No, I mean…I’m practical. I’m not someone who hides herself away or doesn’t want to be recognized and asked for a picture. That’s fine for other people, but I don’t understand it. There’s no free lunch in the world, and every job has a professional hazard, as I call it. But I am very private about my personal life. I do what I have to do, and I have ways of doing it.”

YOU’RE COMPLETELY YOUR OWN PERSON. HOW DID YOU GET LIKE THAT? “At an early age, I concluded that you’ll never know who you really are because you’re constantly changing. ‘Who am I?’ is such an absurd question. Every circumstance or person who comes into your life changes a little piece of you. I’m a bit romantic and philosophical, I guess. I just go with it and make the best of whatever comes my way.”

THAT’S QUITE A ROMANTIC PHILOSOPHY GIVEN HOW DRIVEN YOU ARE. “I’m indecisive until I make a decision. Once I make it, it’s mine—good, bad or ugly. There are times when I’ve made the wrong decision and it has blown up in my face.”

LIKE WHEN? “Many times! Like when a film fails at the box office, for instance. It takes a lot of tubs of ice cream to get me over that. I have not made friends with failure. When he wins, you have to have dinner, he over-orders, he lingers and you really don’t want to be there with him. [Laughs] But once I kick him out the door, I don’t see him for a while.”

BESIDES A SUGAR ADDICT, WHO ARE YOU IN TOUGH TIMES? “I shut down. I go into a shell. My wrath is pretty bad too. When I’m upset with someone, it’s like they cease to exist. It’s cold and scary, which is unlike me in every other way.”

WHAT UPSETS YOU MORE THAN ANYTHING? “I don’t like liars. Honesty is very hot. When you’re scared of the truth, it’s such a turnoff. I also get upset when people try to ‘handle’ you or don’t give you credit for your intelligence and try to manage you for a desired effect. I don’t like games, at work or at play.”

HOW DOES IT FEEL TO BE ON SEASON THREE OF QUANTICO? “I love the validation, of course, and that people watch it and like it and the network has faith in it. I love my character, [federal agent] Alex Parrish. She’s a modern-day hero. She saves the world. She’s badass, flawed and feminine all at the same time. She kicks ass in freaking high heels and perfect hair.”

TO PLAY DEVIL’S ADVOCATE: DOESN’T A CHARACTER LIKE THAT—A HOT OVERACHIEVER WITH A RIPPED BODY—SOMETIMES MAKE IT HARDER FOR “NORMAL” WOMEN TO FEEL LIKE THEY’RE ENOUGH AS THEY ARE? “Yes and no. I find it funny too—my hair isn’t perfect all the time, but Alex’s is. She’s my hot alter ego. It’s TV, so there has to be an element of fantasy. But, that said, when you see Bruce Willis saving the world and blowing up helicopters in a crisp white shirt, men don’t ask why you’re setting a standard for men to look like that. Why do women have to feel that way about it?”

IT’S NOT A COMPETITION. “Seeing a pretty girl shouldn’t make us feel bad about ourselves. When I was younger, I didn’t see people who looked like me in magazines. That doesn’t mean I didn’t aspire to it. I got inspired by the other achievers I saw and made myself the best version of me.”

WHEN QUANTICO PREMIERED IN 2015, THERE WAS A LOT OF TALK ABOUT HOW YOU WERE THE FIRST SOUTH ASIAN WOMAN TO FRONT A PRIME-TIME TV SHOW. WHERE WOULD YOU LIKE TO MOVE THE CONVERSATION NOW? “At the time, that was important, but now, I would just like to be ‘normal.’ We’ve established that I’m Indian. [Laughs] I’m extremely proud of my roots, but I’m not defined by my ethnicity. I want to just be seen as an actor and talk about my point of view and who I am as a person. I want to be able to show the world what I can do.”