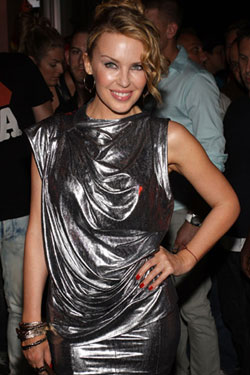 The relentless quest for creative expression has prompted a long list of actors to turn their hands to music. (Even Conan O’Brien is reportedly releasing an album!) Sadly, not all of their endeavours can be called artistic and commercial triumphs. In fact, some are downright cringe-worthy. Here are ELLE’s 10 most notable crossovers, listed in descending order from undeniably impressive to very likely unhinged.

10. Kylie Minogue: The queen of bubbly dance-pop began her career on an Australian TV soap, but her very first single, “Locomotion,” rocketed her to the exalted international-icon level where Madonna, Cher and very few others live. And I don’t think there are bronze statues of them in their hometowns, are there?

Zooey Deschanel on the next page…

9. Zooey Deschanel: Our first clue that the quirky Almost Famous actress could sing was her sweet take on “Baby It’s Cold Outside” in Elf. And when she and M. Ward, a.k.a. She & Him, released their debut, Volume One, it became clear that she could write quirky pop songs, too. They’re currently on tour with their logically titled follow-up, Volume Two.

Drake on the next page…

8. Drake: The smooth ’n’ sultry Degrassi alum won two Junos, massive buzz and the professional interest of Lil Wayne without even putting out an album. This week, hip-hop’s rising star finally makes good on the promise by releasing Thank Me Later. And no doubt we will.

Kevin Bacon on the next page…

on:
T
he
Footloose star who’s mysteriously connected to everybody on Earth makes decent blues-rock with his brother in their band The Bacon Brothers. For extra credit, their concerts support a number of charities.

Jeff Bridges on the next page…

6. Jeff Bridges: The Dude sings! Actually, the laconic Big Lebowski actor released his debut album in 2000, proving he took music seriously long before he won an Oscar for playing a washed-up country singer in Crazy Heart. Unfortunately, he didn’t have T-Bone Burnett helping him out back then, only Doobie Brother Michael McDonald.

Jared Leno on the next page…

5. Jared Leto: In 1998, the actor who played dreamy, inarticulate Jordan Catalano on My So Called Life applied some black eyeliner, picked up a guitar and started the band 30 Seconds to Mars with his brother. Over the years they’ve earned the grudging respect of hard-rock fans with three aggressive albums and awards from MTV Europe and Kerrang magazine. Here’s hoping Jared’s new hot-pink Mohawk won’t scare them away.

Scarlett Johannson on the next page…

4. Scarlett Johannson: Seems ScarJo isn’t satisfied being a worldwide movie star and sex symbol. After a respectable vocal turn on the Break Up album with Pete Yorn, she made the ill-advised decision to record Wherever I Lay My Head, an album of Tom Waits covers (plus one original). Replace Waits’ raspy world-weariness with Scarlett’s sleepy, demented technopop? No, thanks.

Juliette Lewis on the next page…

3. Juliette Lewis: After scoring an Oscar nom as the ambivalent daughter in Cape Fear and scaring the bejeezus out of us as psychotic Mallory in Natural Born Killers, Lewis entered her rock-chick phase, adding raw vocals and general freakiness to her band Juliette and the Licks. She tones it down a bit on her new, sans-Licks album Terra Incognita, but still looks somewhat disturbed dragging a bull around on its cover.

Keanu Reeves on the next page…

2. Keanu Reeves: Even Keanu himself reportedly said that his alternative rock band Dogstar should never have played live. Upon hearing his singing voice, thousands agreed—and yet the band went on to make two albums.

Joaquin Phoenix on the next page…

1. Joaquin Phoenix: The actor who played Johnny Cash so brilliantly in Walk the Line (and won a Grammy for the soundtrack) decided to give up acting for rapping in 2008, but he has yet to make an album. All we have is an incoherent Letterman appearance and a doc, I’m Still Here: The Lost Year of Joaquin Phoenix— but no one is sure if it’s an elaborate hoax or a bad piece of performance art.