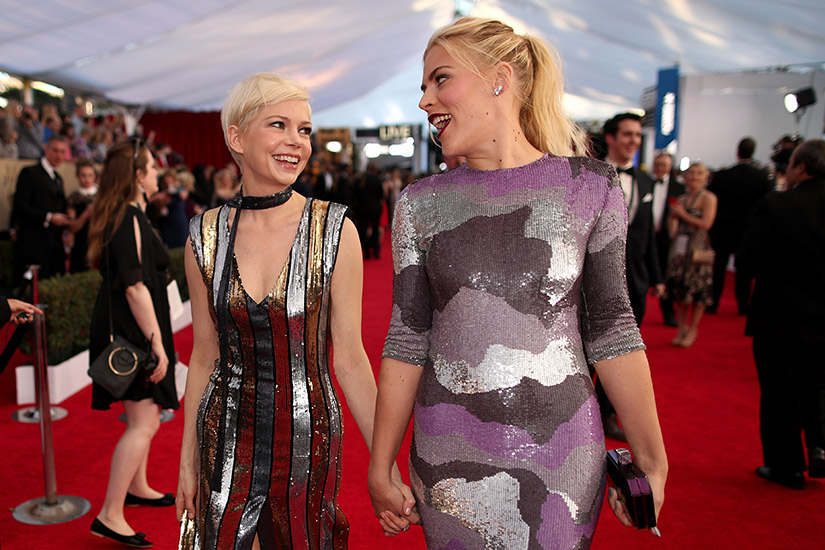 It’s been almost 20 years since Michelle Williams and Busy Philipps met on set of Dawson’s Creek and became the adorable BFFs we love spotting on award show red carpets today. This week, at long last, the pair will be seen in the same movie, I Feel Pretty (which stars Amy Schumer and was co-written and directed by Philipps’ husband Marc Silverstein). To celebrate, let’s honour their beautiful friendship. Then, text all your friends.

2001/2016 I love that we almost always stand on the same side of each other. Also, can I just say-we aren’t at a costume party in 2001. That’s legit how we were dressed for a regular night out. I guess I really was my character from Cougartown? And thank God my eyebrows grew back.

Friendship blossomed between the two BFFs when Philipps joined the cast of Dawson’s Creek in season five as Joey’s (Katie Holmes) college roommate. Thankfully, their (and our) fashion senses have evolved since then.

Williams had two dates to the Oscars in 2006: Philipps and then-partner, the late Heath Ledger (both Williams and Ledger were nominated for their roles in Brokeback Mountain). Philipps has since attended three other Academy Awards ceremonies with her bestie, in 2011, 2012 and 2017.

The besties publicly shared a selfie in one of the earlier posts on Philipps’ now-famous IG, back when it was still popular to use intense filters and borders on the app.

Philipps and Williams are glowing in this photo from their joint vacation in the Maldives to ring in the new year.

Why is this beautiful girl yelling at me in the bathroom?! Because no matter how old you are, sometimes you both still feel like you’re the uncool kids at the middle school dance.

Like any self-respecting BFFs, the stars stopped for a fun selfie during a trip to the bathroom (a frequent setting for selfies of the two on Philipps’ Insta).

So proud of my best friend. Again. And always.

Philipps made a trip out to Broadway to watch Williams star in the drama Blackbird. The pair also attended the Tonys later this same year when Williams was nominated for her performance in the play.

Went to support my sweet bff Michelle at her new movie tonight and got a whole plate of mini crab cakes smushed into me at the after party! THIS IS WHO I AM. ??☠️???✌?(you can watch it all on my Instagram story but I swear a lot. Just warning you)

Always the proud and supportive BFF, Philipps attended a Manchester By The Sea screening with Williams—and ended up with crab cakes smushed into her. Oops!

The friends that eat pasta together stay together.

Holding hands across the aisle on takeoff. Flying with your bff is the best!

Flying is easier when you’re holding hands with your best friend.

The two pals grabbed a quick bite to eat—while still in costume!—during filming of I Feel Pretty last year.

Found her. Happy birthday to my better half. I love you, M. You make everything better. ?

Earlier this year, Philipps flew out to visit Williams on the 10-year anniversary of Heath Ledger’s death. Philipps was friends with the late actor as well, and is godmother to his child with Williams, Matilda.

I’ll tell you a line that’s in my book right now (you’ll have to wait until fall for the rest of the book…) “Michelle is a very easy person to fall in love with. Anyone who really knows her will tell you that. And probably anyone who barely knows her would say that, too.” #creekweek @entertainmentweekly

Entertainment Weekly reunited the cast of Dawson’s Creek to celebrate the 20th anniversary of the show. In her Insta stories, Philipps revealed that Williams asked Philipps to be on her individual cover, and also called the show the start of their “love story.” Awww.

My girlfriend is a dream in real life and in the movie @ifeelpretty. I hope you guys see this movie this weekend! We love it and the message and we hope you do too. ? Thank you to my loves @kmannmakeup @bobbyeliot @karlawelchstylist @gracewrightsell @csiriano for making me feel like a fucking princess. ❤️ #ifeelpretty

Williams and Philipps celebrated the premiere of their new movie in style for the most fab girl’s night out.